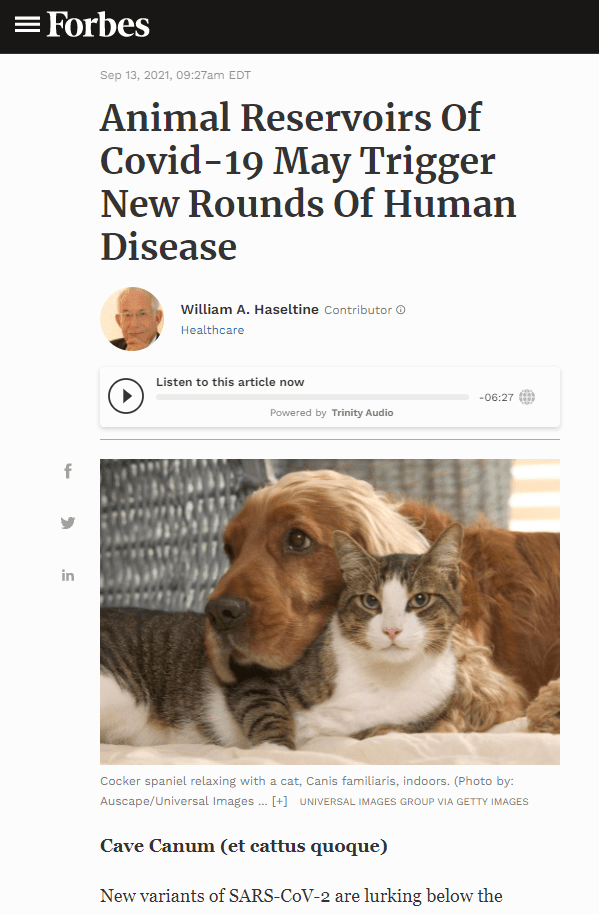 New variants of SARS-CoV-2 are lurking below the streets of New York City. A recent paper by Smyth et al. extracted SARS-CoV-2 samples from fourteen wastewater treatment plants in the City. The team developed methods to detect mutations in a critical region of the genome,  the receptor-binding domain of the Spike protein.

As expected, they found a number of different Covid-19 variants in their samples, including Alpha, Beta, Delta, and Gamma. They also found four distinct “cryptic” lineages, WNY1, 2, 3, and 4, from three of the wastewater sites. These four cryptic variants yield surprising and troubling results. The receptor-binding domain RNA extracted from the samples contained up to 29 mutations in the four detected variants, some previously observed in the variants of concern or interest and others unique to these samples. Figure 1 illustrates the overlap of the mutations found in many other variants. Many of the variants unique to the sewershed variants are extraordinarily rare among the 3.5 million sequences found in the GISAID SARS-CoV-2 database.

The mutations pictured in figure 1 all occur in the small region of the viral genome sampled by the sewer sleuths. This region specifies the receptor-binding domain, the site of attachment of the virus to the ACE2 receptor on the host cell surface. The receptor-binding domain is also the target for the great majority of protective antibodies. Mutations within this region can profoundly affect transmission and immunity.

Most of the cryptic variant mutations occur between amino acid positions 437 and 508. This is the part of the Spike protein that is in direct contact with the ACE2 receptor.

The extensive mutations in the receptor-binding domain are functional. The authors report that pseudotyped viruses carrying a receptor-binding domain substituted with that of the cryptic variants are infectious. This is not entirely unexpected as polymorphisms shared with variants of interest and concern enhance Spike protein function. The shared amino acid substitutions at positions N440, L452, and N501 enhance receptor-binding affinity. The mutations at positions K417, N439, K444, N460, E484, Q493, and S494 reduce virus neutralization by convalescent sera and selected monoclonal antibodies. Evidently, the amino acid substitutions at the twelve novel sites are viable. This is especially notable for the deletion at position 484, a site known to interact with both ACE2 and neutralizing antibodies directly. It is important to determine the potential role of each of these cryptic mutations in immune escape and enhanced function. They may anticipate changes yet to be seen in new variants of concern.

Smyth et al. speculate that these variants arose not from human sources, but from nonhuman hosts. The speculation is based on several observations. First, the cryptic variants are only observed in some, but not all samples. The authors argue that if variants were prevalent in the human population, they would be found throughout the City and not confined to specific sewer sites. The second is that their observation of pseudotyped viruses carrying the “cryptic” receptor-binding domain are capable of infecting non-human ACE2 receptors, specifically those of rats and mice.

Finally, we know that SARS-CoV-2 can infect many species other than pangolins and humans. Up to 40% of all dogs tested in the US have antibodies to SARS-CoV-2. Several variants infect feral house and field mice. Up to 30% of all white-tailed deer in the northeast test positive for Covid-19 antibodies. Reports of infection of both domestic and large cats held in zoos were reported in the early days of the pandemic.

SARS-CoV-2, like the influenza virus, can engage in zoonotic volleyball. Infections from animals can make their way into humans. SARS-CoV-2 strains have infected mink, and mink have returned the favor by infecting humans. As early as January 2021, farmed mink in Denmark showed signs of SARS-CoV-2 infection. These viruses were relayed back to human populations and subsequently sequenced. A study by Bayarri-Olmos et al. indicates that a mutation directly derived from the mink zoonotic transmission, Y453F in the receptor-binding domain, results in up to four-fold higher ACE2 receptor affinity, suggesting a far more transmissible virus. In the future, we must be aware of new variants emerging from fauna that inhabit our ecosystem.

Smyth et al. examined the resistance of pseudotyped viruses carrying the mutant receptor-binding domain to monoclonal antibodies currently approved for treatment:  etesevimab, bamlanivimab, and imdevimab. They report that WNY1 and 2 are partially neutralized by etesevimab and imdevimab. The WNY3 and 4 variants are completely resistant to all the monoclonal antibodies tested. All four variants are also completely resistant to bamlanivimab. The researchers also tested these mutations against naturally-developed antibodies in convalescent antisera. Convalescent sera neutralize both WNY1 and 2 but are far less effective  against WNY3 and 4. The neutralizing titers of the sera from fully vaccinated individuals were also significantly reduced.

Smyth et al. note that as the pseudotyped virus used to test antibody neutralization only includes receptor-binding domain mutations, whereas the full variant is far more likely to decrease antibody neutralization to a greater extent. They conclude that “the characteristics of these variant lineages provide them the capacity to be an increased threat to human health.”

Looking at this small region of the virus has been instructive. The cryptic variants display the full range of variations that may occur within SARS-CoV-2 RNA. The receptor-binding domain shows here a broader degree of mutability. This epitomizes the potential for viral variation, not only in the receptor-binding domain, but in the rest of the Spike protein and viral genome as well, potentially enhancing virulence, vaccine and monoclonal antibody resistance, immune suppression, and transmission.

As a final thought,  it would be remiss not to add the possibility that the extreme variation seen in highly localized New York City cryptic variants is not due to zoonotic variants but rather the effluent from highly regional clusters of variants replicating in human populations, perhaps wards treating immunocompromised patients. Extreme variation of the S protein is documented to occur in such patients. In either case, the final take-home message is that variants documented to date represent only a subset of what we may expect from future SARS-CoV-2 infections.

The RT-qPCR results are integrated with the campus database to trace the potential sources of observed positive cases based on which buildings are upstream from an auto-sampler in the campus sewer network. For instance, if sampler B was positive but an upstream sampler A was negative, only the buildings contributing waste into the sewer between samplers A and B are assumed to be potentially associated with the positive wastewater signal. Rescuers estimate that use of automation reduces turnaround testing time by 20-fold and exceeds the scale of similar surveillance programs by 10- to 100-fold. An automated notification system is used to alert residents to a positive wastewater sample associated with their residence and to encourage uptake of campus-provided asymptomatic testing at no charge. The data is also added to a public dashboard for full transparency and accessibility.

Study co-author Smruthi Karthikeyan, Ph.D., an environmental engineer and postdoctoral researcher at UC San Diego School of Medicine says that this surveillance is uniquely beneficial for a college campus.

“University campuses especially benefit from wastewater surveillance as a means to avert COVID-19 outbreaks, as they’re full of largely asymptomatic populations, and are potential hot spots for transmission that necessitate frequent diagnostic testing,”