Is An Artificial Pancreas On The Way? 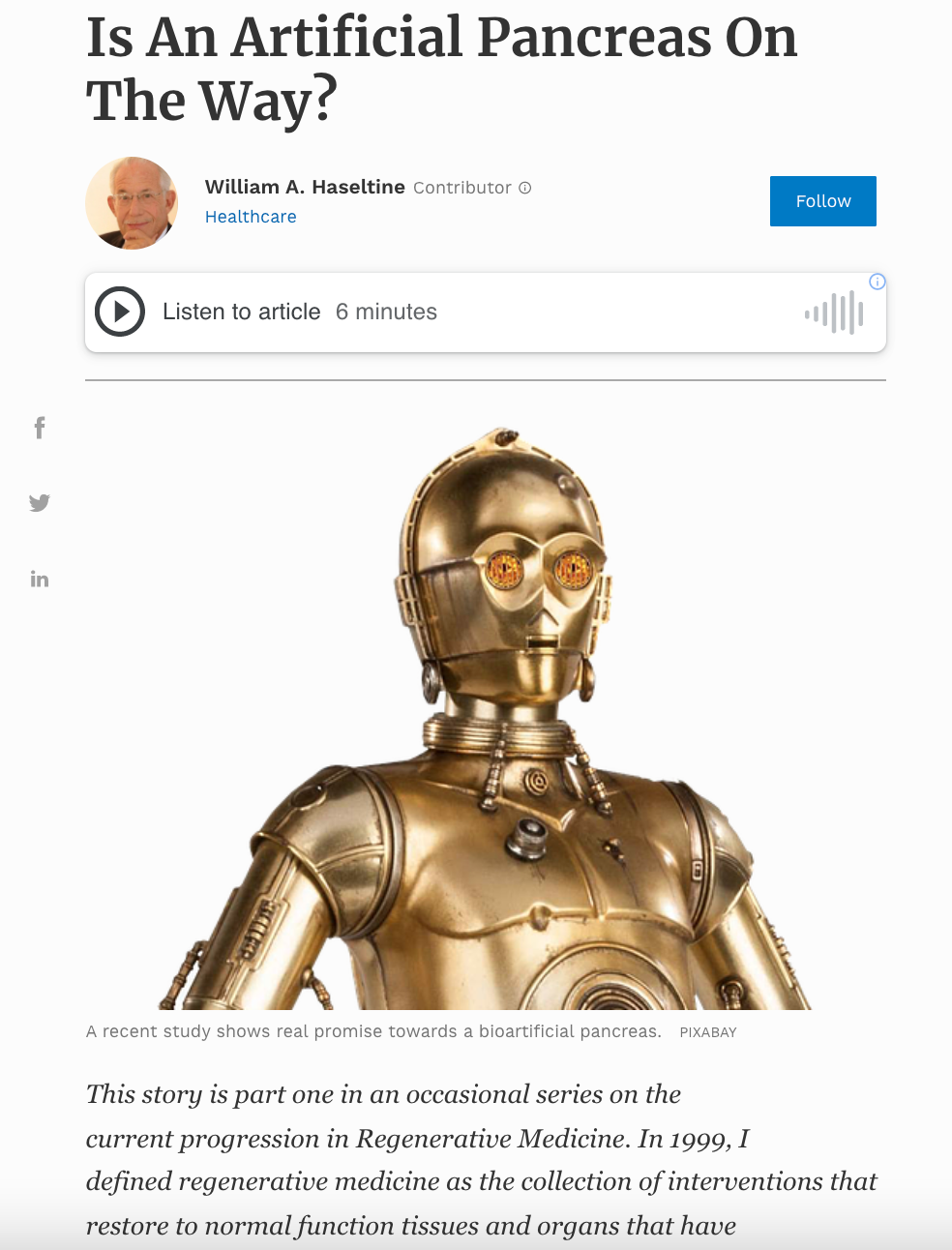 This story is part one in an occasional series on the current progression in Regenerative Medicine. In 1999, I defined regenerative medicine as the collection of interventions that restore to normal function tissues and organs that have been damaged by disease, injured by trauma, or worn by time. I include a full spectrum of chemical, gene and protein-based medicines, cell-based therapies, and biomechanical interventions that achieve that goal.

A recent study shows real promise towards needle-free management of type 1 diabetes. In July, a research team at Brigham and Women’s Hospital together with scientists from Harvard University and the University of Massachusetts described the design of an artificial pancreas for children and adults with type 1 diabetes. The device successfully passed many of the tests required for first trials in patients.

As of 2014, over 38 million people worldwide have type 1 diabetes and the prevalence of this disease seems to be on the rise. Once patients receive a diagnosis, they must follow highly regimented diets, closely monitor their blood sugar levels, and take daily insulin injections. Although these methods have improved the lives of those with type 1 diabetes, there is still a need for a more natural solution for sensing and producing insulin.

So, how can this device help? The artificial pancreas is a small, implantable device that automatically produces insulin according to the body’s needs. The device consists of a chamber that houses live insulin-producing islet cells. The walls of the chamber protect the islet cells from the body’s immune system. The novel feature of the device is a built-in pump that circulates nutrients and oxygen to the chamber cells so they can thrive and continue to produce insulin.

This new device is designed to address the primary issue of ensuring that cells receive necessary oxygen and nutrients. Previous encapsulation devices relied on diffusion alone to transport nutrients to cells. However, the rate of diffusion proved insufficient to provide cells with enough necessary oxygen, leaving most of the cells dead. Researchers believe that a pump that actively circulates both nutrients and oxygen through the device will address this issue.

The research team tested their theory by first designing a prototype. The prototype consists of two chambers connected by a tube. The first chamber collects a supply of nutrients including oxygen and glucose. This chamber has a membrane with larger pores to allow for more nutrients to pass through. Directly following this chamber is a second compartment that contains the beta cells. The second compartment is surrounded by two membranes that have smaller pores. The smaller pores filter out cells and antibodies that could kill the sensitive beta cells.

Having overcome the first hurdle, the team moved on to a cell that was more similar to the cells that may actually be used in humans—stem-cell-derived beta cells (SC-βC’s). These cells are insulin-producing cells derived by Professor Douglas Merton from Harvard University. The SC-βC’s with flow survived at higher rates in the prototype and continued to produce insulin, while cells without flow did not.

After additional experiments were conducted to determine the maximum number of SC-βC’s that could be housed by the device, the team was ready to begin testing the devices in live rats. Scientists surgically implanted the device under the rat’s skin. They modified the device with a tube that ran from the rat to an external pump. Researchers used the pump to accurately infuse certain glucose levels into the animals.

Trials of the active flow device in rats with diabetes were highly successful at maintaining the viability and insulin secretion activity of SC-βC’s compared to rats with diffusion devices and rats with no devices. Cells could also accurately respond to large glucose fluctuations in the live animal.

Not only this, but the larger pores in the first chamber’s membrane promoted the growth of new blood vessels. This means that the device has the potential to be implanted in larger, less vascularized areas which would require less invasive surgeries. If blood vessels can successfully grow around the device, then cells would also have easier access to nutrients.

Further research must be conducted to determine the optimal dimensions of the device in live animals. More experimentation must also occur before the device can be available for humans. However, this publication signals an optimistic future for the decade’s old dream of allowing people with diabetes to control blood sugar levels without the need for insulin supplements.

in
Health Innovation, Public and Private Partnerships for Health

On July 17, the 2021 Rare Disease Symposium on Collaboration …