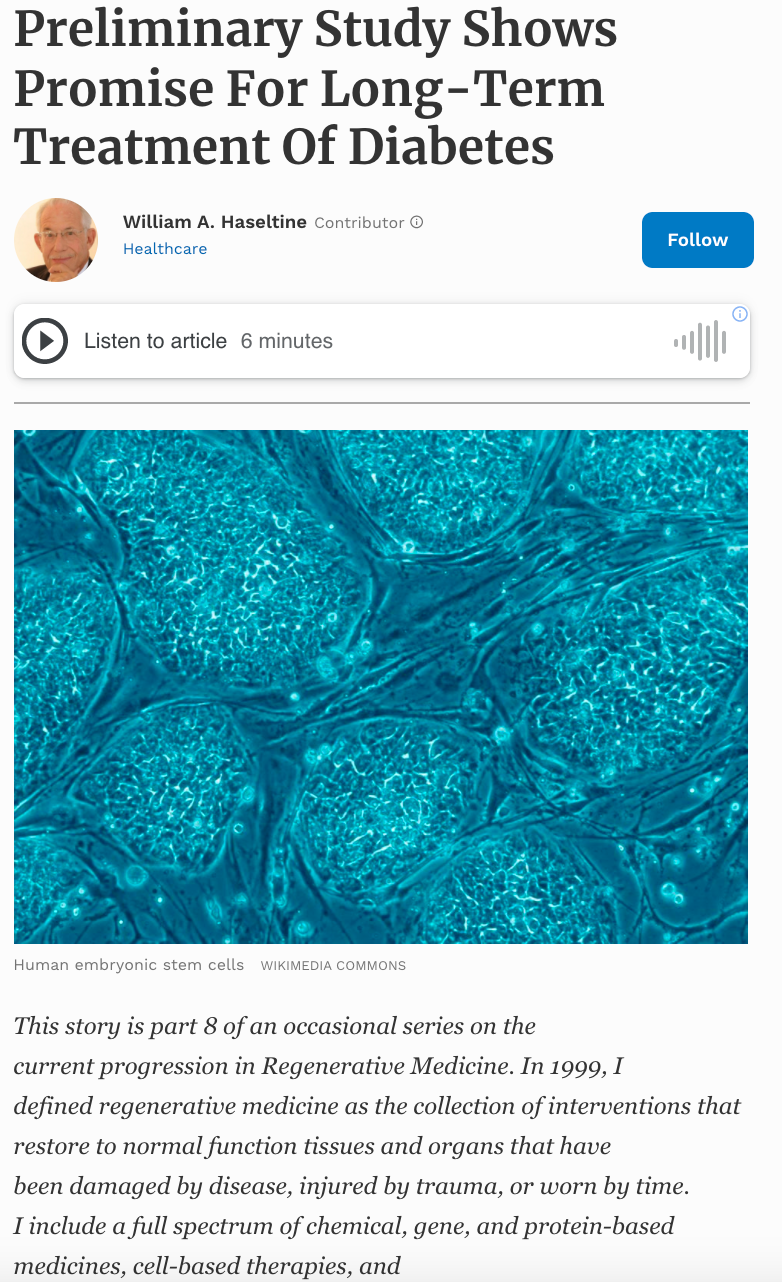 This story is part 8 of an occasional series on the current progression in Regenerative Medicine. In 1999, I defined regenerative medicine as the collection of interventions that restore to normal function tissues and organs that have been damaged by disease, injured by trauma, or worn by time. I include a full spectrum of chemical, gene, and protein-based medicines, cell-based therapies, and biomechanical interventions that achieve that goal.

Results of a preliminary study show that we may be one step closer to achieving a long-term cure for Type 1 diabetes. After decades of research, there now seems to be at least partial success at transplanting functional insulin-producing islet cells into the human pancreas.

Type 1 diabetes is a major public health crisis. The disease occurs when the body’s immune system attacks its own insulin-producing pancreatic cells. Without these insulin-producing cells, patients are at risk for blindness, disabilities, and are at increased risk for Covid-19.

The process of developing this method began with understanding which chemical signals were needed to steer stem cells into insulin-producing cells. Stem cells are a type of cell that can be reprogrammed into earlier, embryonic stages of development. With the right chemical signals, stem cells can then be transformed into almost any other cell in the body.

To guide stem cells into insulin-producing pancreatic cells, the research team at Harvard focused their efforts on learning about the development of the pancreas and discovering the mechanisms the pancreas uses to produce these cells in the first place.

After a painstaking and systematic effort to determine which chemical signals could transform stem cells into insulin-producing islet cells, the research team at Harvard finally seemed to hit upon the magic formula. Harvard then worked in collaboration with Vertex pharmaceuticals to conduct early phase clinical safety trials of the cells in Type 1 diabetics. These initial trials provided guidance for improvements in the methods used to produce the islet cells. After the success of these initial safety trials, the cells were ready for clinical trials.

The results of the clinical trials were recently published in the Cell Stem Cell Journal. An important caveat of stem cell-grown islet cells as a cure for Type 1 diabetes is that it is an autoimmune disease. So, for patients with Type 1 diabetes, their immune system will attack any cell that resembles pancreatic islet cells. For a successful transplant of pancreatic islet cells to occur in Type 1 diabetics, it is necessary to use immunosuppression tactics which essentially suppress the immune system’s attack on the islet cells. This was done by prescribing patients immunosuppressive medication before they were injected with the lab-grown islet cells. After this process, researchers followed the patient’s insulin levels to determine if the transplanted islet cells were producing sufficient levels of insulin to make a difference to the patient’s diabetes.

While no participant of the formal clinical study achieved full independence from insulin injections, the daily insulin requirements of all participants decreased significantly. The results of these trials are promising. The cells were successfully grown, transplanted, and produced insulin in response to the body’s natural glucose levels. In addition, one man who participated in the early safety trials of the study has now reported full independence from insulin injections. He can now eat a meal without having to monitor or adjust his insulin levels whatsoever and may be the first reported individual to be cured of his Type 1 diabetes.

The results of these trials are truly promising. However, there are still some caveats to the success of stem cell-grown pancreatic cells in clinical application. The most glaring difficulty is the requirement of immunosuppression medication to limit the immune system’s rejection of transplanted islet cells. While these drugs allow for a successful transplant of islet cells to Type 1 diabetics, they can have significant side effects such as inflammation, liver abscesses, infections. Other, less serious side effects include loss of appetite, nausea, and vomiting. In fact, all participants of the study reported some level of adverse reactions to the immunosuppression drugs. Three participants experienced serious adverse reactions, leading some of them to withdraw from the study.

Overall, the results of this study are very promising and mark a significant step forward in diabetes treatment. While more work must be done, we continue to look for the day when stem cell-grown islet cells can completely replace the function of biological pancreatic cells and when millions worldwide can live insulin injection-free lives.

in
Health Innovation, Public and Private Partnerships for Health

On July 17, the 2021 Rare Disease Symposium on Collaboration …