A Missed Opportunity: A Decision To Regret 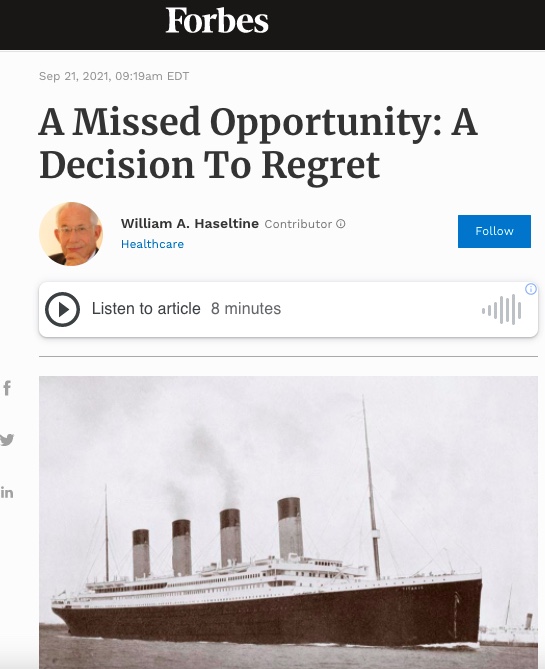 The FDA advisory panel got it wrong — or at least they only got it half right — when it approved boosters only for those who are at high risk of severe Covid and those 65 and older. In failing to approve vaccines for all adults over the age of 16, the FDA missed a major opportunity to get ahead of the Covid-19 pandemic. This was a critical mistake, as approving vaccines for all adults could have allowed us to finally get ahead of the curve and control the course of the pandemic.

One can only hope that the FDA, in considering the panel’s recommendations, will side instead with the White House and the wealth of evidence that shows three shots of the mRNA vaccines are necessary to protect ourselves from Covid-19. The President and his advisory team have made it clear that they are willing to take a more aggressive stance on boosters and are able to roll it out, starting as early as this week. This move could have created a much-needed fire break to stop the unceasing waves of new infections in our country. While we would still need to encourage those unvaccinated to accept the shots, for those who have already agreed to vaccines this would have been an important step. The FDA panel’s half measure and failure to support an all out attack is a decision I can’t help but think they will eventually look back on with regret.

The evidence presented on Friday and in numerous studies published in recent weeks is clear: A third dose of a Covid-19 mRNA vaccine is essential for protection. One need look no further than the data published by Pfizer on whether neutralization titers waned after two doses of their vaccine and what the impact of a third dose would be. Previous studies, such as this one, had already shown that the vaccine’s efficacy waned, in this case from 95% approximately two months after a second dose to 84% between four and six months after.

The Pfizer study found that neutralization titers dropped considerably between one and eight months after a second mRNA dose, far more rapidly than the efficacy numbers might indicate (see Figure A below). The study also found that one month after a third dose of the vaccine, neutralization titers skyrocketed beyond the levels achieved after the second dose, for all ages 18-85. This confirms that the best protection is provided by three full doses, not two. Moderna’s data confirms the same.

Bar graph of increase in activity against variants with booster shot in two different age groups. This shows that over time the neutralizing antibodies decline to very low levels and in many cases, as time progresses, fall until there is no effective neutralization.

Moreover, though the Pfizer study was with an admittedly small sample size, there were no safety issues or side effects beyond the side effects seen after the first and second doses. We have a sense already, from hundreds of millions of people in more than 125 countries, that the mRNA vaccines are safe for all aged 12 and older. We also have a sense from countries like Israel who have already started administering a third dose of the Pfizer vaccine that a third dose is safe as well.

This of course begs the question of why the FDA panel called the safety of a booster dose into question in rejecting it for all Americans. Odd too given that they were willing to approve the dose for the most vulnerable among us, who would presumably be most affected if there were real safety concerns. It’s possible that the panel members made their decision based on hope and an overestimation of the duration and efficacy of Covid vaccines against serious disease and death. Unfortunately, the data out of Israel shows that, if this is indeed their thinking, it is faulty.

Israel had fully vaccinated more than half its population by the end of March and then reopened in June. Within a month and a half, new Covid cases tied to the Delta variant started to rise exponentially despite the high vaccination rate. A study published in late July found that protection from Covid had faded in proportion to the length of time since vaccination, a finding echoed by Pfizer’s finding. But more troublesome was the data that came in August, which showed that severe illness among the vaccinated was also on the rise, particularly in those aged 60 and older. The Israeli Health Ministry also noted that a seemingly modest decline of just 12% in vaccine effectiveness could translate into a 5-fold increase in severe cases among the vaccinated.

Covid-19 cases and deaths in Israel

I don’t believe that anyone who has followed this pandemic closely since it emerged would find any of the above a surprise. When it comes to inducing immunity, vaccines rarely perform better than natural infection. We knew, from the devastating outbreaks in India and Manuas, Brazil where there were widespread infections in early waves and then equally widespread reinfections in subsequent waves, that natural infection offered no guarantee against reinfection, severe illness or death. It was folly to assume our vaccine-induced immunity would act any differently.

What we didn’t know before was why it was happening, but we have a better sense of that now. SARS-CoV-2, much like the influenza virus, has learned tricks that can inactivate our immune systems, essentially shielding itself with a cloak of invisibility so it can enter our bodies, replicate quickly, and exit to infect others, all before our primary and innate immune response kicks in. This essentially gives the virus a free ride for anywhere from two to five days, perhaps longer. The virus, in less than two years, has mutated to such an extent that it is now able to unleash a trifecta of trouble: able to evade the immune response from natural infection and vaccination, able to replicate more rapidly once infection is established, and to replicate for a more prolonged period of time, increasing the total amount of virus in the respiratory tract by 1000-fold. Moreover it appears the Delta variant is more pathogenic, as people infected with the Delta variant are twice as likely to be hospitalized, compared to those infected with previous strains.

Given the clear need for a third dose and the apparent lack of safety issues, some have hinted that the FDA panel members may have been frustrated by the President’s public announcement of a booster rollout, before the FDA had even debated the issue, a case of poorly timed pique. No matter the motivation, we may be in the process of blowing the one real chance we have now of getting ahead of the pandemic. That, I believe, is what the current administration was trying to achieve by announcing their readiness to deliver boosters for all. It’s a strange moment to find ourselves with a President and a team of advisors ready to charge forward to protect the nation while scientists block the way.