A Thoughtful Way To End The Covid-19 Pandemic (Part 16) 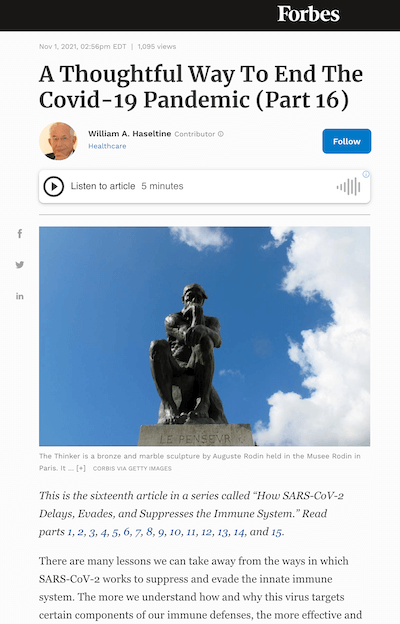 There are many lessons we can take away from the ways in which SARS-CoV-2 works to suppress and evade the innate immune system. The more we understand how and why this virus targets certain components of our immune defenses, the more effective and focused our efforts to strengthen our vulnerabilities can become, in particular for older adults and other populations at high risk for Covid-19.

The first lesson is that when we talk about innate immunity, we tend to conflate two arms of the immune system that warrant clear distinction. One is the pathway that stimulates interferon and interferon-stimulated genes. The other is the pathway that triggers inflammation through proinflammatory cytokines like tumor necrosis factor (TNF), interleukin-6 (IL-6), and interleukin-8 (IL-8). Evidence suggests that while the interferon pathway has a protective function that weakens as we age, the inflammatory pathway only grows in potency, which can in fact have adverse and even lethal consequences for older adults.

The second lesson we’ve learned is that more components of innate immunity are essential to its general functioning than we initially thought. Only in recent years have researchers begun to unpack the full efficacy of innate immunity—as compared to adaptive immunity—as a line of defense against pathogens. Studies of SARS-CoV-2 add to this existing body of work by documenting the various mechanisms viruses can develop to target innate immunity with greater precision. It appears that suppression of innate immunity allows SARS-CoV-2 to replicate to higher titers more efficiently, peaking before symptoms begin to show.

The third lesson, to the previous point, is that the innate immune system is a target-rich environment ripe for drug development. Many studies show that as a Covid-19 drug, interferon—initially thought to be a promising candidate for treatment—counteracts the virus too bluntly and as a result, causes adverse effects in many of the patients who take it. To target SARS-CoV-2 with greater precision and less collateral damage, our therapies need to operate as molecularly as the virus itself. In parts of this series I’ve discussed how we categorize parts of the virus which participate in delaying innate immune response (Figure 1). I think it’s likely that inhibition of one or more of these could allow the immune system to fully suppress the virus in almost everyone.

The fourth lesson is that we have to begin making a concerted effort to deepen our understanding of how to strengthen the immune systems of older adults. According to the literature, young children appear to mount an especially robust interferon defense against SARS-CoV-2. This trend runs counter to what we see in older adults, who exhibit an especially strong inflammatory response. Several drugs, for arthritis, psoriasis, inflammatory bowel disease, and autoimmune disease, work on the NF-κB pathway, one of many researchers should explore as an option for reducing inflammation. We also need drugs that strengthen interferon pathways.

The fifth and last lesson is that genetic predispositions must also factor into our evaluations of risk for severe Covid-19 and the therapies we develop in response. If two thirds of a population is more sensitive to severe Covid-19 due to a genetic predisposition against interferon, we need to investigate whether we can stimulate AA inheritance types to be more like GC; whether we can stimulate ribonuclease L; whether we might even be able to use CRISPR technology to intervene and correct for potential points of vulnerability.

Evolution has prepared our bodies to fend off many diseases, both through our innate and adaptive immune systems. Nature has gifted humans with intentional reasoning, which has given us an additional set of tools that allow us to fight the virus, understand it, and create new drugs for innate immune modulation. If we make the best and brightest use of our natural gifts, I’m confident we’ll be able to relegate Covid-19 if not a disease of the past, one that rarely, if ever, is fatal.