Can Inflammation Lead To Cognitive Issues? Past Research Says ‘Yes’, With Implications For Covid-19 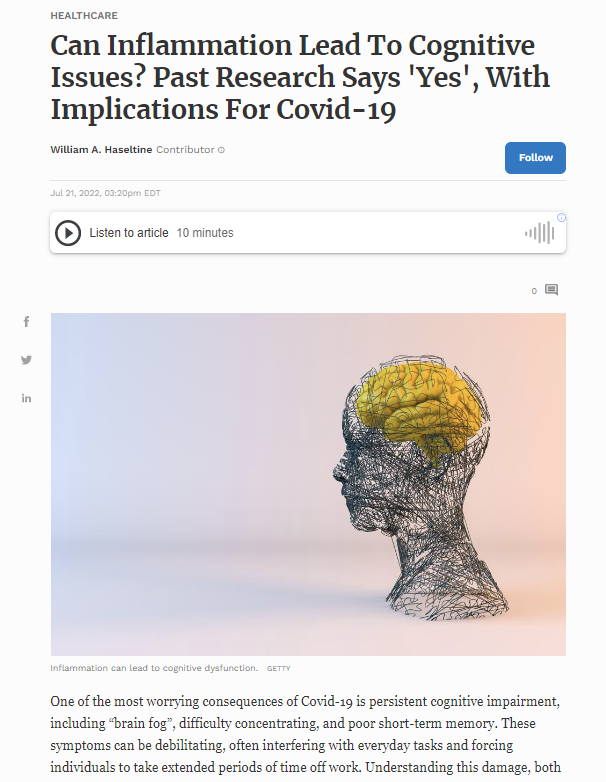 One of the most worrying consequences of Covid-19 is persistent cognitive impairment, including “brain fog”, difficulty concentrating, and poor short-term memory. These symptoms can be debilitating, often interfering with everyday tasks and forcing individuals to take extended periods of time off work. Understanding this damage, both in the short and long term, is a pressing challenge. Here, I discuss a few discoveries from the past two decades that may help us with this task. In a follow-up article, I will discuss how these findings have been used to study the effects of mild SARS-CoV-2 infection on the cognitive health of mice, with potential implications for Long Covid.

“Chemo Brain” and the Hippocampus

The first contribution comes from a body of work produced during the early 2000s by a group of researchers at Stanford University’s Department of Neurosurgery. Spearheaded by neuroscientist Michelle Monje, the group set out to pinpoint the mechanisms underlying the cognitive dysfunction associated with cranial radiation therapy, a kind of cancer treatment used to prevent the spread of cancer cells to the brain. This decrease in mental sharpness has since become well-established —now referred to as “cancer-therapy-related cognitive impairment” (CRCI), or “chemo brain”— and can happen in response to other cancer treatments as well, such as chemotherapy.

The hippocampus is a complex brain structure closely involved in processes of both memory and learning, two areas heavily impacted by dysfunction following cranial radiation therapy. Dr. Monje and colleagues focused their attention on the hippocampus, discovering that cranial radiation therapy leads to significant neural cell dysfunction; in particular, rat models demonstrated that irradiation was interfering with the formation of new neurons, known as neurogenesis. The continued production of new neurons is vital to healthy cognitive function. In some hippocampal regions, the number of newborn neurons was reduced by as much as 52% compared to non-irradiated levels.

So, a decrease in the number of new nerve cells in the hippocampus led to the cognitive dysfunctions associated with “chemo brain”. But, what was causing the decrease? In a paper published in the winter of 2003, Dr. Monje returned with an answer: inflammation.

Given that cranial radiation therapy kills dividing cancer cells in the brain, it brings with it a degree of damage to other cells as well. For example, the endothelial cells of the small blood vessels in the brain. This damage can activate immune cells called microglia, which in turn trigger small signaling molecules called cytokines that stimulate the inflammatory response. The neuroscientists hypothesized that the increase in cytokines, and by extension inflammation, that accompanies irradiation may be enough to throw the microenvironment of the brain out of balance, leading to the inhibition of neurogenesis in the hippocampus.

To test this theory, the researchers injected rats with bacterial lipopolysaccharide (LPS) to stimulate systemic inflammation. Injection of LPS into the peritoneal cavity —which wraps around many of our abdominal organs, including the stomach and small intestine— causes an inflammatory cascade that eventually induces the release of pro-inflammatory cytokines in the brain, simulating what one might see after cranial radiation therapy. The rats were then treated with a chemical compound, bromo-deoxyuridine (BrdU), that is used to study the proliferation of cells. After 6 full days of exposure, the small team of experts analyzed the proliferative cells in the hippocampus.

They noticed an immense reactivity in the microglial cells of the hippocampus; a 240% increase in the density of active microglial cells. In normal, healthy animals, very few activated microglial cells are found. This is because microglia are some of the major immune cells of the brain, in charge of destroying invading microbes, disposing of damaged or dying cells, and stimulating pro-inflammatory cytokines. As such, unless something has gone wrong and the central nervous system is damaged, microglia will be mainly dormant, performing only routine homeostatic functions.

Crucially, microglial activation was accompanied by a 35% reduction in the formation of new, mature neurons in the brain of irradiated rats. Plotting the relationship between microglial inflammation and neurogenesis yielded a striking negative correlation — the higher the load of activated microglia, the weaker the formation of new neurons (Figure 1). This suggests that chronic inflammation can lead to a dysfunction in neural stem cells, suppressing neurogenesis and worsening cognitive function.

One of the cytokines stimulated by microglial cells, called interleukin-6 (IL-6), was associated especially strongly with a decline in neurogenesis. Exposing progenitor neural cells to IL-6 in vitro led to a 50% reduction in new neurons, implicating IL-6 as a key player.

To confirm that inflammation was responsible for the interference with neurogenesis, the researchers treated mice they had injected with LPS with a common non-steroidal anti-inflammatory drug, indomethacin. This lowered activation of microglial cells and lowered systemic inflammation, successfully restoring hippocampal neurogenesis.

All told, the work by Dr. Monje and her colleagues helped link systemic, general inflammation to cognitive dysfunction, laying part of the groundwork for current research on SARS-CoV-2-induced cognitive issues.

Chemokines and Cognitive Decline with Age

In 2011, a different group of researchers in the Department of Neurology and Neurological Sciences at Stanford University released a study investigating the mechanisms underpinning the cognitive decline that comes with aging. Chemokines—a group of cytokines principally responsible for stimulating cell migration— were found to be a driving force of dysfunction, with C-C motif chemokine 11 (CCL11) sitting at the steering wheel.

To study the decline in neurogenesis observed during aging, Villeda et al. made use of laboratory technique called parabiosis. This is when two organisms are surgically connected so that they share the same bloodstream. Surgical union allows researchers to study the effects that cells circulating in the blood of one animal have on the other animal — it can be used to pinpoint the impacts of secreted factors, such as cytokines and chemokines.

After being paired to the old mice, the young mice displayed a decrease in the production of new neurons as well as a decrease in the proliferation of neural progenitor cells. The opposite occurred in the older mice, who saw a slight reversal in their cognitive decline due to improvements in hippocampal neurogenesis. Mice paired with other mice their age saw no such changes. The same results held true when blood from old mice was directly injected into younger mice. In both cases, reduced neurogenesis following exposure to the blood from old mice also led to functional impairments in cognition, as measured by fear conditioning and memory tests. This indicates that some systemic, age-dependent blood-borne factors were to blame for the sudden differences in neurogenesis.

Vidella and colleagues analyzed the blood of the old mice, the young mice, and the young-old parabiotic pairs in order to find the exact molecules associated with worsening neurogenesis. They compared the levels of 66 different cytokines, chemokines, and other signaling molecules between the different groups. Six of these stood out, elevated in both unpaired old mice and in young mice who had been surgically paired with old mice: CCL2, CCL11, CCL12, CCL19, haptoglobin and β2-microglobulin (Figure 3).

The presence of CCL11 was surprising, as it had not previously been linked to aging. Curious to see whether this was the case in humans as well, the researchers analyzed blood samples from people aged between 20 and 90. Indeed, CCL11 levels in humans also increased with age.

Upon injecting live young mice with CLL11, the researchers noted a decrease in neurogenesis. Injection of CLL11 in combination with an anti-CLL11 antibody negated the effects. The CCL11-induced impairment of neurogenesis was also associated with a functional decline in cognition.

Together, these various studies hint at an important point: systemic inflammation itself can slow the production of new neural cells in the hippocampus, which is in charge of memory and learning. That is, a viral infection could lead to cognitive dysfunction even in the absence of direct infection of the brain or central nervous system. Covid-19, as already mentioned, is characterized by high levels of pro-inflammatory cytokines and chemokines. Might these play a role in the cognitive impairments suffered by many Covid-19 and Long Covid patients? The circumstantial evidence is strong.

In a coming article, I explain how scientists at the Yale School of Medicine used these past findings as a springboard for insightful new research on Covid-19-induced cognitive issues.