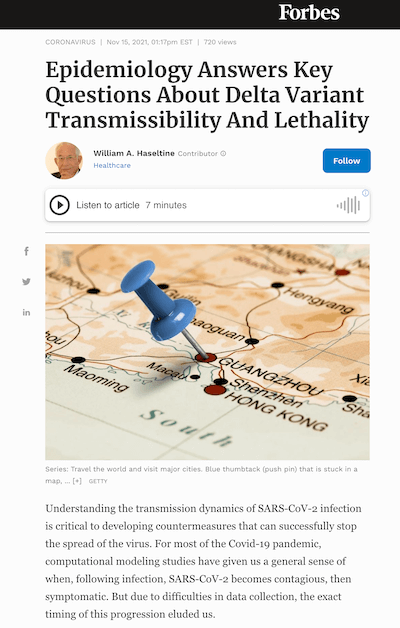 Understanding the transmission dynamics of SARS-CoV-2 infection is critical to developing countermeasures that can successfully stop the spread of the virus. For most of the Covid-19 pandemic, computational modeling studies have given us a general sense of when, following infection, SARS-CoV-2 becomes contagious, then symptomatic. But due to difficulties in data collection, the exact timing of this progression eluded us.

That is, until this past August, when a group of Chinese researchers published a preprint study of an outbreak of the Delta variant in Guangdong province. Their study pinpoints, with unprecedented precision, exactly when in the disease course infectivity and symptom onset might be expected. And in the broader context of epidemiological research and disease control, the study is an excellent example of the level of insight possible when public health measures, including contact tracing, are systematically combined with cutting-edge virology and pathology.

In May 2021, public health officials in Guangzhou, China began tracking an outbreak of Covid-19 cases caused by the highly infectious Delta variant of SARS-CoV-2. Through rigorous PCR testing and contact tracing protocols, they identified infected individuals and controlled the outbreak by June. The authors of the study, Kang et. al, drew from this pool of epidemiological data to determine how long it takes the Delta variant, as compared to the original wild type virus, to become infectious and cause symptoms in the people it infects. They aggregated data on a total of 167 Covid-19 patients.

First Kang et. al identified the upper and lower bounds of the latent period, in the interval of time between infection and infectiousness, for each patient by creating a timeline around the dates of their last negative PCR test and first positive PCR test. Then they determined the incubation period, or the interval of time between infection and the onset of symptoms, again using data collected via contact tracing, monitoring, and routine testing—procedures that in China are now standard safety protocol in the event of any outbreak. Kang et. al also gathered information on close contacts of their patients to see how quickly the virus spread between hosts.

Kang et. al organized their findings around two principal epidemiological parameters: R0 and Rt. Calculated together, these measures create a profile of disease infectiousness that provides key insights on its intensity and duration​​. They allow us to predict how quickly the virus will spread once it becomes infectious. Kang et. al also used statistical analysis to identify time-based trends in viral load, or the concentration of viral particles in the body.

Of the 167 cases recorded during the Guangzhou outbreak, Kang et. al had enough data to calculate latent and incubation periods for about 100 symptomatic cases. The latent period between infection and first appearance of the virus was 4.0 days on average, while the incubation period between infection and first symptoms was 5.8 days on average (Figure 1A and 1B). That means SARS-CoV-2 is estimated to become infectious four days following infection, with symptoms appearing around day six.

Kang et. al also used data from 94 transmission pairs—pairs of Covid-19 cases confirmed to have an evident epidemiological connection—to estimate the peak of infectiousness (Figure 1C). They found that more than 70 percent of transmission occurred before symptoms appeared, with infectiousness peaking about two days prior to symptom onset. Viral loads remained high before and after patients became symptomatic, then decreased to barely detectable levels by Day 20.

To compare the transmissibility of the Delta variant with wild-type SARS-CoV-2, the researchers used data collected in the same city during outbreaks in early 2020. Kang et. al found viral concentrations in Covid-19 patients infected by wild-type virus to be lower than those in patients infected by the Delta variant. They speculate that the higher viral loads documented in the Delta cases likely contribute to an increase in the speed and intensity of transmission. Far more cases of critical Covid-19 were also recorded in the Delta patient cohort; none developed in the group infected with wild-type virus.

The exact R0 obtained by Kang et. al was 6.4, which according to the study is significantly higher than that of the wild-type virus. The researchers calculated the R0 of the Delta variant by estimating Rt when the Guangzhou outbreak was on the rise, as well as the series interval.

From May 25 to June 18, over a period of three and a half weeks, Kang et. al estimated that Rt dropped sharply from 9.3 to 0.48 once the Chinese government began implementing lockdowns and isolating those exposed. The rapid drop in Rt was due to these public health measures—an example of how rigorous public health interventions control disease transmissibility.

Kang et. al conclude that the public health measures implemented to contain outbreaks caused by the Delta variant, including vaccination but also testing and contact tracing, must be escalated to account for shorter latent and incubation periods and lower the incidence of severe disease. That such a high caliber of data is not the standard in more countries is a failure of our public health systems, but thanks to the Kang et. al study, we have hard data on the Delta variant we’ve lacked for some time. The intrinsic R0 was subject to debate—now we know exactly what it is. We also know how much more lethal and transmissible the Delta variant is compared to the wild-type virus.

The clarity and insight we stand to gain from systematic, targeted public health interventions is undeniable. We cannot forget that our efforts to stop the spread of Covid-19 are only as good as our understanding of the virus itself.