Expelling Covid: It Takes Longer Than You May Think 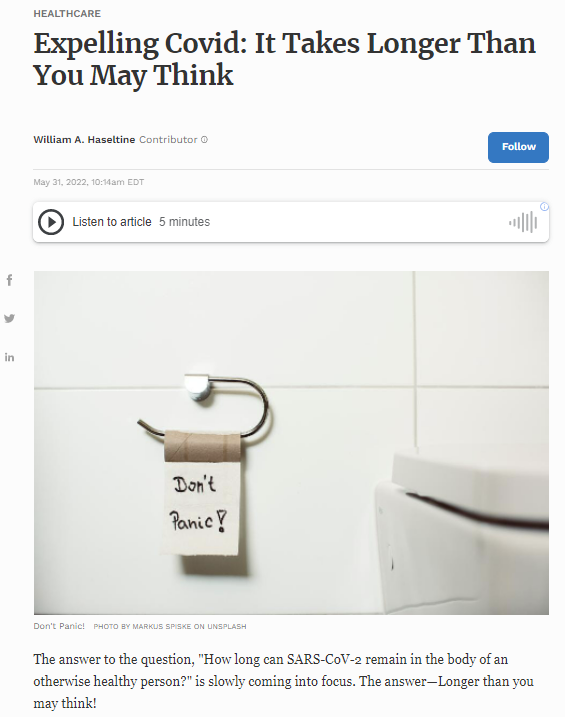 The answer to the question, “How long can SARS-CoV-2 remain in the body of an otherwise healthy person?” is slowly coming into focus. The answer—Longer than you may think!

The lungs and the intestine seem to be the major two organs infected by SARS-CoV-2. The lungs as the point of entry—the intestine, as the largest and richest site of the ACE 2 virus receptor. The latter may surprise you. Recent studies suggest that the virus harbors in the lungs and intestines for many, if not most, of us.

One giveaway are the now frequent references to the detection of SARS-C0V-2 RNA in what are called sewer sheds. A sharp increase in the concentration of viral RNA in our sewers is a dead giveaway of yet another wave of infection in our community. Whence the RNA?

Expelled with our stool from the infected intestine.

The data emerged from a study by Natarajan et al. to determine whether or not a long-acting form of interferon-gamma (pegylated interferon) was useful in the treatment of Covid-19. Alas, the data show no effect of interferon treatment on the progress of the disease.

However, the study did turn up interesting data on intestinal infection.

The investigators measured viral RNA in the stool as a marker for infection. To their surprise, they detected virus in the stools of most participants.

How did they do it?

Natarajan et al. collected stool and respiratory samples from patients with mild to moderate symptoms and tested for viral RNA. The participants were randomly assigned into one of two groups, those that were administered the pegylated interferon or those that were administered a placebo. Of 120 total participants, 113 provided a stool sample at least one of the six defined time points, with 86 participants providing a stool sample thrice. Over the course of 10 months, 673 stool samples were collected and underwent an assay of the SARS-CoV-2 genomic RNA for the envelope protein, nucleocapsid protein, and RNA-dependent RNA polymerase (RdRp).

What did they find?

These findings suggest prolonged infection of Covid-19 and viral shedding. The study does not rule out the possibility that some of the longest positive samples are the result of reinfections.

Pegylated interferon treatment had no meaningful effect on the presence of viral shedding in fecal matter and observed gastrointestinal symptoms (figure 2). Patients with positive respiratory symptoms may experience a spectrum of Covid-19-related symptoms independent of whether or not viral RNA is present in their stool. Natarajan et al. comment that fecal shedding may indicate the presence of an ongoing infection and that such infections can be accompanied by gastrointestinal systemic symptoms.

These results should come as no surprise. Coronaviruses are well known to infect the gastrointestinal tracts of many species, including bats, the home species of SARS-CoV-2. The implications for long-term health, treatments, and pandemic control are subject to intense research.