Getting a Grip on Influenza: The Pursuit of a Universal Vaccine (Part 4) 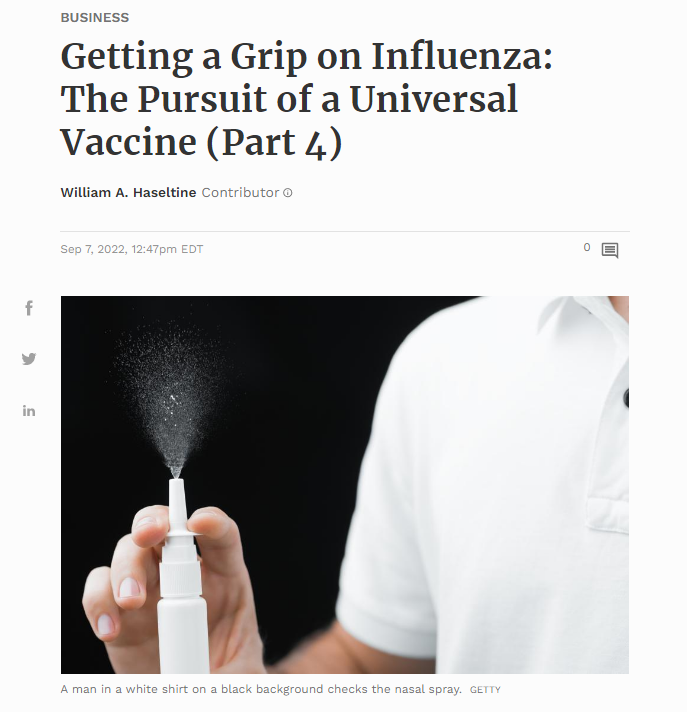 This is a short series focusing on the challenges of developing effective influenza vaccines. In the first part of this series, I gave a brief overview of the history and nature of influenza viruses, including why they represent a tricky target for vaccine manufacturers. In the previous two articles —which can be read here and here— I discussed some of the attempts that have been made to overcome these challenges. This article focuses on another such attempt: intranasal vaccination. Finally, the last few installments will offer a detailed analysis of the latest, and most promising, advances in the development of universal vaccines.

Nasal Vaccination: Straight to the Source

Current influenza vaccines are reasonably effective at reducing the risk of severe illness, hospitalization, and death, but they need to be updated on a yearly basis to remain protective. The influenza surface proteins that vaccines use to teach our immune system how to defend itself can mutate rapidly, leading to a mismatch between the vaccine antigens and those actually in circulation. A good season will see around 60% of people protected by the flu vaccines. A poorly matched season can see this number drop as low as 20%.

Even when the vaccines are well matched to the circulating strains, they still need to elicit a high concentration of neutralizing antibodies to be effective. Antibodies bind to the influenza surface protein and prevent viral entry into cells, creating a barrier between virus and host. Unfortunately, these wane very quickly — a recent meta-study, performed by scientists at the University of Michigan, Ann Arbor and Northwestern Memorial Hospital, found that the protection offered by the flu shot can be lost completely within a span of 90 days.

Most flu vaccines are administered by intramuscular injection, delivering the antigens deep into the muscle tissue. This raises circulating antibody levels throughout the body; a generalized, systemic response. Over the years there have been a number of suggestions that a vaccine administered intranasally may offer better protection. The flu, being a respiratory virus, is most at home in the nose and the throat. It spreads by aerosol droplets when people talk, sneeze, or cough. Vaccinating through the nose —in the form of a spay, rather than injection— would more closely mimic influenza’s natural route of infection. Ideally, the corresponding antibody response would be localized, offering highly targeted protective immunity at the very source of infection.

Why exactly is it thought that nasal administration could improve vaccine efficacy? To understand this, we need to take a closer look at something called mucosal immunity.

Our skin is one of the first lines of defense against injury and infection, acting as a physical barrier that prevents unwanted entry. But some areas of our body need to allow for a degree of exchange between inside and outside. Broadly, these include: the gastrointestinal tract, the urogenital tract, and the respiratory tract. Each of these inhabits a strange in-between space— on the one hand they are inside our body, but on the other they are constantly exposed to the outside world, rendering them particularly vulnerable.

To protect against foreign threats, these areas are covered by a lining known as a mucous membrane, or mucosa. As with our outer skin, part of the mucosa’s protective function lies in acting as a physical barrier. To this effect, the membrane is covered in mucus, which helps trap and slow the advance of microbes — a runny nose is our body’s attempt at expelling microbes once they’ve been trapped, so too is phlegm.

But aside from this passive form of protection, the mucous membrane is also packed full of pockets of mucosa-associated lymphoid tissue (MALT), which contain all kinds of immune cells (Figure 1). This layer is known as the lamina propria. It includes B and T lymphocytes, roughly three quarters of which reside in our various mucosal regions. B cells produce antibodies, which can bind to viral particles and prevent them from entering our cells, blocking infection. T cells help kill off cells that have already been infected, curbing viral spread. They also recruit additional immune cells to areas of infection, speeding up viral clearance. Along with B and T cells, mucosa-associated lymphoid tissue is also home to natural killer cells and macrophages, which directly engulf and neutralize any pathogens trying to pass through the epithelium. Finally, dendritic cells act as a kind of surveillance system that modulates the specifics of our immune response on a case-by-case basis. Dendritic cells also present naive B and T cells with foreign antigens, prompting them to differentiate and provide the most specific possible immune response against the microbes at hand.

The close proximity of mucosal immune cells to the membrane surface carries with it a distinct advantage: they can jump into action more quickly than they would be able to in non-mucosal regions of the body. They don’t need to waste important time traveling to far off sites of infection, since they are already at the main portal of entry.

Crucially, there exists a class of antibodies —immunoglobulin A (IgA)— that is only produced by B cells in the mucosal membrane. Immunoglobulin A can take on one of two forms: serum IgA, which circulates through the blood as one might expect, and secretory IgA (sIgA), which is made on the underside of the mucosal membrane and is transported across the membrane to the mucosal surface. A key component of this process is the polymeric Ig receptor (pIgR) that binds to the IgA, enabling the antibody to be absorbed by the epithelial cell barrier and ferried through to the surface. As the IgA exits the epithelial cell, the polymeric Ig receptor is cleaved off, preparing the antibody for action (Figure 2).

An additional strength of sIgA is the fact that it is a dimer, meaning it is composed of two identical molecular IgA parts, held together by a small joining-chain (JC). Whereas monomeric antibodies have two binding sites, dimeric sIgA has four. This is suspected to improve its ability to bind to antigens, allowing for quicker viral clearance.

So, unlike most other antibodies, sIgA is stationed on the outside of the body. Here, IgA can bind to microbes —including viruses— before they even have a chance to enter the body. This prevents the microbes from binding to our cells, and by extension, protects us from infection. Akiko Iwasaki, Sterling Professor of Immunobiology and Molecular, Cellular, and Developmental Biology at Yale University, describes it as “putting the guard outside of the door instead of inside the door where antibodies normally work, inside the body.”

The first nasal flu vaccine, FluMist, was approved by the U.S. Food and Drug Administration (FDA) in 2012. By 2016 it had been pulled off the market, not to reappear until 2018. The reason? Decreased vaccine effectiveness. Combined data from 2013 to 2016 indicates that nasal spray vaccine effectiveness was roughly 26% in children between the ages of 12 and 17. This is compared to 51% effectiveness for inactivated vaccines, administered intramuscularly.

Although these low numbers were brushed off as being a result of poorly matched vaccine virus strains, there may also be other reasons the nasal spray influenza vaccine hasn’t quite lived up to expectations.

For one, IgA is typically quite short-lived; it is produced only for a brief period after exposure. Any barrier immunity that the nasal spray vaccine does offer us will likely fade as soon as IgA numbers drop. And durability is already a point of concern with traditional, inactivated flu vaccines, which depend on the longer-lived circulating IgG class of antibodies for protection from infection. So, we cannot expect it to be all that durable.

Another worry is that the nasal spray vaccine may be cleared by our immune system before it has the chance to complete its job. Adults who have previously been exposed to the flu —and that means more or less every adult— will still have at least partial mucosal immunity against the influenza viruses. The attenuated, or “weakened”, viruses used in the nasal spray vaccine might simply be getting neutralized before they can infect nasal cells, preventing our B cells from updating sIgA to match the viruses circulating that season.

On a more theoretical note, one might also question the belief that vaccine-induced mucosal immunity can provide lasting protection if natural infection, through the same path of entry, fails to do so. Many people are infected by influenza on a seasonal basis, with waning immunity and viral mutation leading to renewed vulnerability year after year. This happens even though they would have built up some degree of mucosal immunity during prior infection. If prior infection through the nose doesn’t protect us from reinfection, why would a nasal vaccine?

This hints at a larger issue: we still know very little about the dynamics of mucosal immunity and about the nuances of nasal vaccination. Speaking at the White House Summit for the Future of Covid-19 Vaccines, Dr. Anthony Fauci stressed that we still lack validated animal models to help us sample and quantify mucosal immune responses. Similarly, we lack clear correlates of protection for intranasal vaccines. Although a simplification, IgG levels following intramuscular injection are associated with improved vaccine effectiveness; we don’t yet have enough data to make such inferences in the case of intranasal vaccines. Knowledge about clinical trial designs and endpoints is also lacking, further complicating the development and adoption of nasal vaccines.

There has been tremendous excitement around mucosal vaccines, with many in the field pinning their hopes on long-term protection from infection as well as severe disease. The experience with FluMist serves as a caution that the high hopes for nasal vaccination may not be realized.

We will soon have data from two new efforts. In China, CanSino Biologics has just had their inhaled Covid-19 vaccine authorized for emergency use. And in India, Bharat Biotech’s Covid-19 nasal vaccine was authorized for restricted use. Many more are in development. Time will tell if they live up to their promise to prevent infection and reduce transmission.

The next article in this series will look at a shift in strategy: moving away from yearly vaccines that try to closely match predicted wild type viruses, and instead, attempting to create vaccines that neutralize a broad array of influenza viruses even in the face of continued viral mutation. So called “universal” influenza vaccines.