Getting a Grip on Influenza: The Pursuit of a Universal Vaccine (Part 5) 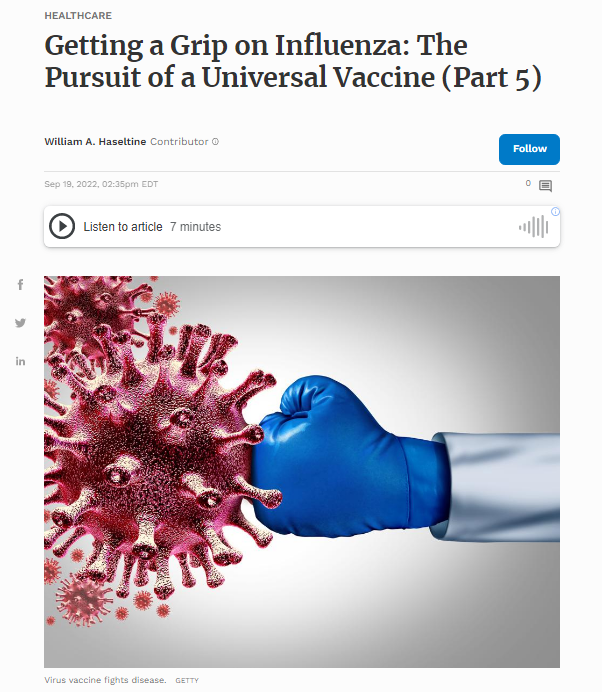 This is a short series focusing on the challenges of developing effective influenza vaccines. In the first part of this series, I gave a brief overview of the history and nature of influenza viruses, including why they represent a tricky target for vaccine manufacturers. In the following three installments—which can be read here, here, and here— I discussed some of the attempts that have been made to overcome these challenges. The following articles will focus on one of the more promising approaches to date: universal vaccines.

Vaccines work by exposing our immune system to viral proteins. Our immune system then recognizes these proteins as foreign molecules —antigens— and springs into action, neutralizing the threat. As part of this process, immune cells known as B and T lymphocytes build up an “immunological memory” of the antigen in question, helping them to react more quickly and more efficiently should we become reinfected.

Many of the recent advances in vaccine technology have focused on changing the way the antigens are delivered to our immune system. Recombinant vaccines, mRNA vaccines, and live-attenuated mucosal vaccines, to name just a few. With recombinant and mRNA vaccines in particular, the benefits are most acutely seen on the production side of things: both production times and production costs are cut back significantly by these vaccine platforms. They also provide scalability, allowing for improved pandemic preparedness.

But in and of themselves, changes to the delivery method have not yielded substantial changes to vaccine effectiveness. At least not in the case of influenza. True, faster production times will help scientists keep the antigens used in the vaccines well matched to those of the viruses actually circulating during flu season. Unfortunately, even when well matched, influenza vaccines are currently 60% effective at best.

How the antigen is delivered is one side of the coin, what antigen gets chosen in the first place is the other side. Delivery platforms continue to evolve, yet progress in antigen selection has been lagging. To optimize our influenza vaccines, we need both.

Whether egg-based, cell-based, recombinant or otherwise, most of the currently available flu shots use the hemagglutinin (HA) surface protein as their antigen of choice. This makes sense; influenza viruses depend on the hemagglutinin protein to gain entry into our cells. Block the protein, and you have a chance at blocking infection. The issue with using hemagglutinin as the primary antigen is that it is extremely mutable. The structure of the protein can change to avoid previously established immunity, including B cell-derived antibodies. Thus, the seasonal flu cycle and yearly flu shots.

The universal vaccine approach aims to change things. Instead of using the head of the hemagglutinin protein as the antigen, researchers working towards an universal flu vaccine look for viral proteins, or specific protein regions, that are highly conserved across strains and across time — essentially, antigens that only very rarely mutate. If successful, universal vaccines could provide a much broader immunity, eliminating the need for new vaccines every year.

So far, there have been two promising contenders: the stalk portion of the hemagglutinin protein and, for influenza A viruses, the extracellular region of the Matrix-2 protein (M2e).

The hemagglutinin surface protein can be separated into two regions, one being the highly mutable head (HA1) and the other being the stable stem (HA2) (Figure 1). The head region contains the receptor binding domain (RBD) which the influenza viruses use to bind to our cells. Using this area as the reference antigen creates a highly specific immune response, with antibodies that can block the RBD and, if present in sufficient numbers, may prevent infection. But the specificity comes at the cost of breadth. Even a single mutation can throw off our immune system, rendering the antibodies practically ineffective.

Where the HA head domain is used to bind to our cells, the stem region is used for fusion — the process by which the virus “injects” its genetic material into the host cell cytoplasm, kicking off viral replication. Briefly, once a viral particle has bound to a host cell it is “ingested” by a section of the cell membrane that then buds off to form a membrane “bubble”. The resulting bubble is called a vesicle, and foreign substances internalized in this way are usually promptly digested and disposed of by the cell. But influenza viruses are crafty and have developed a way to use the acid that normally helps our cells digest such vesicle contents to instead free up the RNA inside the viral particle. This is where the stem portion of the hemagglutinin protein comes into play. Once the RNA has been freed up, the HA stem is used as a lever of sorts to pull the viral membrane into the cellular membrane, finally creating a “tear” that lets the genetic material escape into the cytoplasm. Once there, the virus can begin replicating before spreading to other cells.

A vaccine that targets the HA stem and blocks it from initiating fusion would interrupt the replication process, preventing further infection and stopping the virus in its tracks. Indeed, researchers have already developed vaccines based on “headless” HA proteins as antigens, but results so far have been slightly underwhelming; although the protection the vaccines have provided has been fairly broad, it has not been very strong. Mice inoculated with vaccines based on HA stalk as an antigen still lose noticeable amounts of body weight, a common symptom of illness. This has been particularly true for influenza A viruses with group 2 HA proteins (see figure 1), which also happen to be those causing the majority of seasonal infections.

In response, attention has also been directed towards the matrix-2 (M2) protein (Figure 2). This protein spans the membrane of the influenza viral particle and functions to internalize the acid I mentioned above. Without the M2 protein, the viral RNA cannot be untethered from its membrane and replication is once again impaired. Vaccines that target the M2 ectodomain (M2e) have fared better than those that target the HA head alone.

More recently, efforts have been made to merge HA stem and M2e into one single molecule, to boost immunogenicity. Linking them chemically has yielded promising results, with higher protective potency than HA stem or M2e vaccines alone.

This suggests a way forward.

The next article in this series will provide a detailed analysis of a recent success in the search for an effective universal flu vaccine: genetically linking M2e and HA stem.