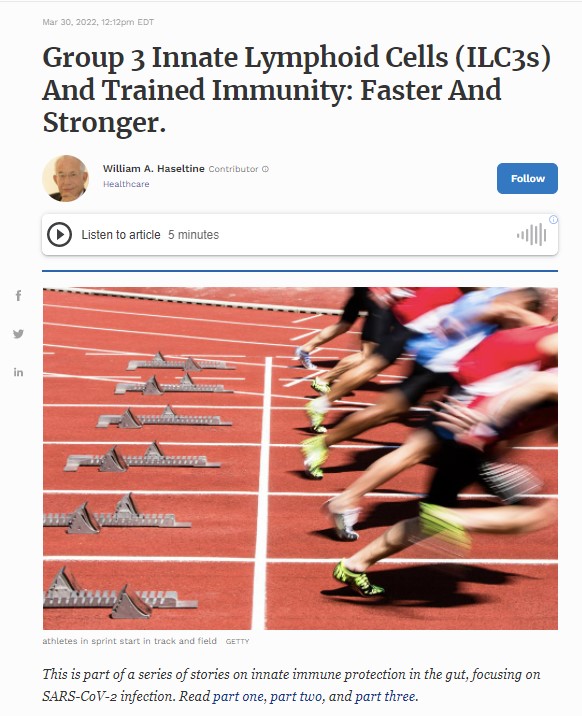 This is part of a series of stories on innate immune protection in the gut, focusing on SARS-CoV-2 infection. Read part one, part two, and part three.

The past few decades have yielded a wealth of new research on innate lymphoid cells (ILCs), including work on the development of immunological memory in ILC1s and ILC2s. The ability of ILC3s to develop such “trained immunity,” however, has remained somewhat of a mystery. Scientists from the Institut Pasteur and Inserm have tackled the issue head on, discovering that ILC3s do, in fact, have the ability to learn from their previous encounters with pathogens, allowing them more quickly to recognize and engage should they reencounter them down the line.

Once in the gut, C. rodentium attaches itself tightly to the walls of the small intestine and colon. This causes innate dendritic cells to activate, and in turn, triggers ILC3s into action. However, dendritic cells also get the adaptive branch of the immune system involved. So to focus solely on the ILC3 portion of the immune response, the researchers gave the mice a short course of antibiotics, preventing the adaptive response from kicking in while still allowing ILC3-related immune responses to function as normal.

During the initial infection with C. rodentium, both the number of ILC3s and the number of T cells, a quintessential adaptive immune cell, remained fairly constant. One month after initial infection, Serafini et al. reinfected the mice with C. rodentium: this time, the number of intestinal ILC3s skyrocketed (Figure 1). There was a particularly strong response in two ILC3 subsets, NKp46+ and CCR6+, which the researchers decided to name “trained ILC3s”. All the while there was little to no change in T cell populations.

Along with the spike in ILC3s, there was no observable bacterial growth during reinfection (Figure 2). This suggests that ILC3s can spawn functional, specific and persistent subsets in response to even a short initial exposure to a bacterial pathogen. In a sense, a kind of immunological memory.

Wanting to see how long this trained immune response lasted, Serafini et al. reinfected the same mice again four months after the initial infection. Once more, they witnessed a rapid increase in ILC3s in response to infection, along with very low levels of bacterial growth— both a sign of a strong and efficient immune response. In fact, four months post initial infection, the absolute number of intestinal ILC3s had increased significantly (Figure 3). Not only this, the number of subsets that express interleukin-22 had increased as well. The results hint at the fact that trained ILC3s can persist for quite some time after initial infection, and that, upon reinfection, they can expand as needed.

Dotting their i’s and crossing their t’s, the researchers checked to make sure that trained ILC3s could be generated upon reinfection even without an adaptive immune response. They tested this by exposing mice that had been mutated to produce no mature T or B cells, known as Rag2−/− mice, to the C. rodentium bacteria. Those Rag2−/− mice that had already been previously exposed to the C. rodentium, and thereby built up trained ILC3s, had significantly higher levels of ILC3s than did those Rag2−/− mice exposed for the first time. Again, bacterial growth was also substantially lower in the mice with trained ILC3s. This confirmed that trained ILC3s can function just as well during pathogen reinfection without T cells present as they do with T cells present.

That said, both classical and innate immunological memory responses are characterized by durable metabolic changes, and this was clearly the case in trained ILC3s. These subsets shifted from glycolysis and glutaminolysis to enhanced tricarboxylic acid (TCA) cycle, also known as the Krebs cycle. This shift was also accompanied by a change to fatty acid synthesis and oxidation-associated gene expression.Serafini et al.’s work offers an exciting new insight into the world of innate immunological memory, and confirms that ILC3s can, and do, develop trained immunity that allows them to respond to pathogen reencounters with heightened sensitivity and heightened efficacy.