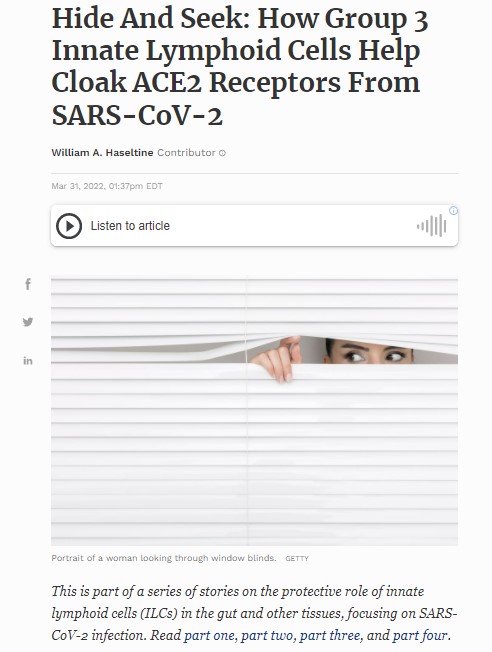 This is part of a series of stories on the protective role of innate lymphoid cells (ILCs) in the gut and other tissues, focusing on SARS-CoV-2 infection. Read part one, part two, part three, and part four.

Innate lymphoid cells (ILCs) are found throughout the mucosal surfaces of our body, but they are particularly well-represented in the lung and in the gastrointestinal tract. Here they help our innate immune system with the difficult task of sorting commensal microorganisms —which share our body without causing us harm— from those with a pathogenic inclination. Of the ILC family, group 3 ILCs are most closely associated with gastrointestinal immunity. Their main function in the immune response is the production of interleukin-17 (IL-17) and interleukin-22 (IL-22), more on this below.

SARS-CoV-2, although mainly known for its impact on the lungs and the respiratory system, is also very much a virus of the gut. Covid-19 patients have displayed symptoms related to the gastrointestinal tract, including diarrhea, nausea, and vomiting. In some, gastrointestinal issues remain up to 6 months after initial infection, contributing to issues of malnutrition and inability to gain weight.

Here we explore two different studies which, taken together, implicate ILC3s as an important part of the immune response against SARS-CoV-2 infection of the gut.

The first paper comes from a group of researchers based out of the University of Tokyo. Kamioka et al. describe the process by which ILC3s, in combination with commensal bacteria, help regulate Paneth cells.The epithelium of our small intestine —a single layer of cells that helps protect our gut from a variety of threats and stressors— is organized into crypts and villi (Figure 1). Villi are finger-like protrusions that extend towards the center of our small intestine, helping to absorb nutrients from our food and shuttle them into the dense system of capillaries directly underneath. Each villus is surrounded by a number of crypts, which is where new epithelial cells are formed to replace those that have been worn down by passing food.

Paneth cells sit at the base of these crypts. From there, they secrete a host of antimicrobial peptides, such as α-defensins, and immunoregulatory proteins, both of which help keep our gut’s ecosystem in balance. By extension, they also contribute to the repair of the epithelial layer and modulation of intestinal inflammation.

Kamioka et al. noticed that, by virtue of metabolic differences, Paneth cells can actually be broken down into two subsets: Fut2− Paneth cells and Fut2+ Paneth cells. Compared to Fut2− Paneth cells, the Fut2+ cells were a lot more complex in structure and possessed a higher density of granules containing α-defensin, both of which suggest that Fut2+ is the subset of Paneth cells more actively involved in host defense and immune response.

Recognizing that IL-22 plays a role in the growth and repair of epithelial cells, the researchers next tested to see if IL-22 signaling worked to regulate Fut2+ Paneth cell development and maturation. Comparing mice that had been mutated to lack IL-22 with their unmutated counterparts, Kamioka et al. confirmed that the IL-22-deficient mice had far fewer Paneth cells in their ileum —the last part of the small intestine before it joins the large intestine— than did the wildtype mice. This suggests IL-22 signaling is part of the regulatory process underlying Paneth cell development.

Spurred on by this finding, the researchers wanted to see if IL-22 also affects Paneth cell secretion of α-defensins. To test this, they exposed a mouse-derived intestinal organoid —a kind of miniature replica of the intestine grown from stem cells— to IL-22 for a period of two days. When compared to pre-exposure levels, the number of α-defensins in the organoid had increased significantly, confirming that IL-22 has a direct impact on secretion.

Kamioka et al. also discovered that IL-17 contributes to α-defensin secretion. Areas of the small intestine rich in Fut2+ Paneth cells were found to express much higher levels of IL-17 than others. Further, IL-17-deficient mice had far lower levels of α-defensins in their feces compared to wildtype mice, again suggesting that IL-17 regulates the amount of α-defensins produced by Paneth cells.

All in all, their work shows that the two main interleukins produced by ILC3s, IL-17 and IL-22, play a central role in the development of Paneth cells and, by extension, the secretion of α-defensins. But, do α-defensins offer any particular protection against SARS-CoV-2 infection? Here we turn to the second study.

In September of 2020, a group of Chinese researchers based at The Army Medical University in Chongqing, China, were struck by a puzzle: how is it that the human gastrointestinal tract, despite spanning more than 2150 square feet and being covered in angiotensin-converting enzyme-2 (ACE2) receptors —the main receptor for SARS-CoV-2 entry into cells—, is less susceptible to infection than the lungs?

To find out why this might be, Wang et al. made use of immunofluorescence microscopy (IFM). IFM is a microscopy technique that can help visualize the presence of a specific protein or antigen in cells or tissue sections. This is done by binding a special antibody to the target cells or target tissue; namely, an antibody that has been chemically combined with a fluorescent dye. If the target protein or antigen is present, then the area will glow from the fluorescent dye, showing up clearly under the microscope.

For this particular experiment, the researchers focused on human defensin-5 (HD5). This is the most common α-defensin secreted by intestinal Paneth cells and, as Wang et al. reported, is in close contact with the ACE2 receptors found in enterocytes, the most abundant epithelial cell of the intestines (Figure 2). The scientists discovered that HD5 can bind to the ACE2 receptors found on the surface of enterocytes. More specifically, they determined that HD5 attaches to and “cloaks” a part of the ACE2 receptors known as the ligand-binding domain (LBD) (Figure 3).

Recognizing that the LBD plays an important role in SARS-CoV-2 entry into cells, the researchers were curious to see if this relationship between HD5 and ACE2 receptors had any impact on SARS-CoV-2 infection. To test their hunch, they exposed Caco-2 cells —a type of cell often used to model the intestinal epithelial barrier— to SARS-CoV-2 Spike (S) pseudovirions. When compared to a control group, those Caco-2 cells pre-treated with HD5 for one hour before infection displayed a significant reduction in SARS-CoV-2 invasion (Figure 4). This was tested three times across three different days, and held true each time. Further, it was also shown to be the case in human renal proximal tubular epithelial cells, a kind of epithelial cell found in a different part of the gut.

Wang et al. conclude, “[t]o our knowledge this is the first study demonstrating the innate defense function of human intestine against SARS-CoV-2.”

In closing, these two reports suggest that: a) ILC3s play a crucial role in the development and maturation of Paneth cells, including the production of α-defensins, and b) that human defensin-5, the α-defensin most abundantly produced by Paneth cells, can hide part of the ACE2 receptors found in epithelial cells across the human gastrointestinal tract, effectively blocking SARS-CoV-2 binding. It would also be interesting to know, as Wang et al. mention, whether in vivo supplementation of HD5 can help assuage the severity of SARS-CoV-2 infection— especially in those with HD5 deficiencies, such as patients suffering from Crohn’s disease or other inflammatory bowel diseases.