How Your Gut Protects You from Myriads Of Microbes. 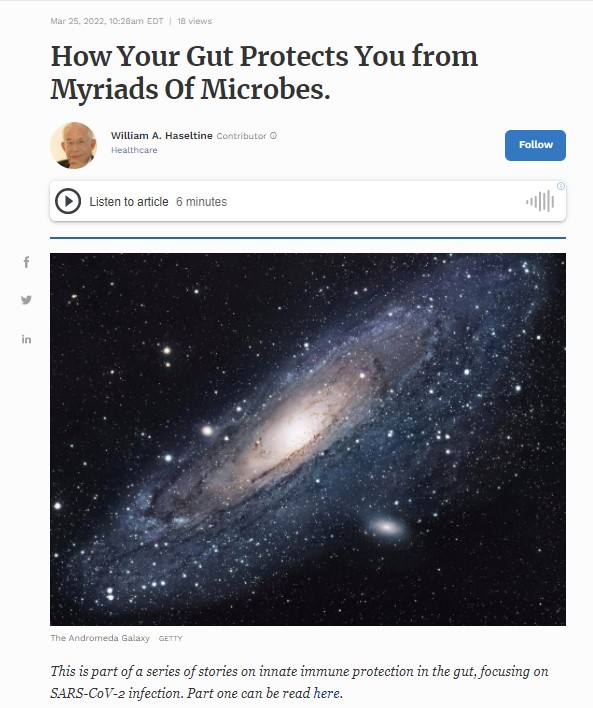 This is part of a series of stories on innate immune protection in the gut, focusing on SARS-CoV-2 infection. Part one can be read here.

The Milky Way Galaxy, the one we have the pleasure of calling home, contains somewhere between 100 to 400 billion stars. That’s a difficult number to wrap your head around. Now, what if I told you you’re home to around 50 times as many “inhabitants”—good, bad, and ugly— in your gut alone?

These inhabitants comprise part of what we call the human microbiome. Coined in 2001 by the American molecular biologist Joshua Lederberg, the term refers to “the ecological community of commensal, symbiotic, and pathogenic microorganisms that literally share our body space and have been all but ignored as determinants of health and disease.” Essentially, all of the microorganisms that live in and around our bodies. There’s a lot. In fact, despite not being outnumbered 10:1, as often claimed, still only around half of the cells in the human body are actually human cells.

Although there are various different microbiome sites, including oral, vaginal, and skin microbiomes, the gut is by far the largest and most complex. Our immune system has the difficult task of presiding over this environment, having to sort the friendly microorganisms from those with the potential to cause us harm. The innate immune system, in particular, plays an important role in keeping things in balance.

Our gut is an especially tricky environment for our immune system to keep track of. One big reason for this is that, unlike our skin, the gut needs to allow a certain amount of “trade” between outside and inside: we need to absorb vital nutrients from the food that passes through our intestines while also getting rid of metabolic waste. As such, the immune system in our gut is constantly on its toes, making sure only the things we need are allowed to enter our body.Added to this is the fact that the entire alimentary canal, from your mouth onwards, inhabits a strange in-between space— on the one hand it is inside our body, but on the other it is constantly exposed to the outside world. In a sense it’s like a second skin, just that it’s on the inside and that it’s a lot more permeable. Being exposed to the outside while also being more permeable makes these areas very vulnerable to infection. This second, inside skin is called the mucosa.

Here we focus on the small intestine, in which the mucosa is made up of three main layers: the mucus layer, the intestinal epithelium layer, and the lamina propria.

The inner wall of our small intestine —the section that faces the food passing through— looks like a mountainous valley, composed of multiple folds of mucosal tissue (Figure 1). These folds are covered in little hair-like projections called villi, which themselves are covered by a single-cell layer of epithelial cells (Figure 2). It is around these folds, and the villi that cover them, that we find the mucus layer.

FIGURE 1. Schematic representation of the anatomy of the small intestine. FROM: “ORAL DRUG DELIVERY, ABSORPTION AND BIOAVAILABILITY.” DAHLGREN ET AL. 2021

FIGURE 2. Structure of the intestinal mucosa, with the villi clearly marked. FROM: “IMMUNOLOGICAL ASPECTS OF INTESTINAL MUCUS AND MUCINS.” JOHANSSON ET AL. 2016

The mucus layer helps keep food and other large substances from contacting the epithelial cells underneath while still allowing smaller molecules to move through it. Given that it’s made up of a sticky gel, the mucus also slows the advance of entering microorganisms, buying our immune system some time should any of them be deemed a threat. The mucus layer also contains defensins —peptides that kill misplaced microorganisms— and a host of antibodies and other antimicrobial substances as a first line of defense. Given these antimicrobial features, it is considered the biochemical barrier of the mucosa (Figure 3).

FIGURE 3. A diagram of the three layers of the intestinal mucosa: the mucus layer (biochemical … [+]FROM: “KEEPING BUGS IN CHECK: THE MUCUS LAYER AS A CRITICAL COMPONENT IN MAINTAINING INTESTINAL HOMEOSTASIS” FADERL ET AL. 2015

The next layer, the intestinal epithelium, acts as the main physical barrier to entry; it’s a web of different endothelial cells tightly bound by protein complexes. These tight junctions, as they’re known, give the endothelial layer its structural solidity and make it difficult for unwanted microorganisms to move through. Interspersed amidst enterocytes, the most common type of endothelial cell, you’ll find two other kinds of highly-specialized epithelial cells: Paneth cells and goblet cells. Paneth cells are found in the “valleys” of the intestinal mountainscape, between the villi. The technical name for these valleys is intestinal crypts (as seen in Figure 2). From their location within the crypts, Paneth cells secrete the majority of the antimicrobial content found within the mucus layer— they are the factories of antimicrobial production. Goblet cells, in turn, are located along the trunk of the villi. They’re main purpose is to synthesize and secrete the mucus that acts as a buffer to the epithelial cells.

Finally, the lamina propria sits underneath the intestinal endothelial cells. Here, it offers added structural support and assists the prior two layers with host defense. This layer houses the majority of the innate and adaptive immune cells, including macrophages, dendritic cells, B and T cells, and also innate lymphoid cells (ILCs). The immune cells are brought into action with help from specialized intestinal epithelial cells called microfold (M) cells. M cells act as gateways of sorts, ferrying antigens and microbes from the lumen of the gut into the lamina propria (as seen in figure 3). This process helps present antigens to the immune cells below. Upon encountering a foreign antigen, the immune cells can then migrate to lymph nodes and amplify the immune response as needed.