Innate Lymphoid Cells And Covid-19 Severity: Chicken Or The Egg? 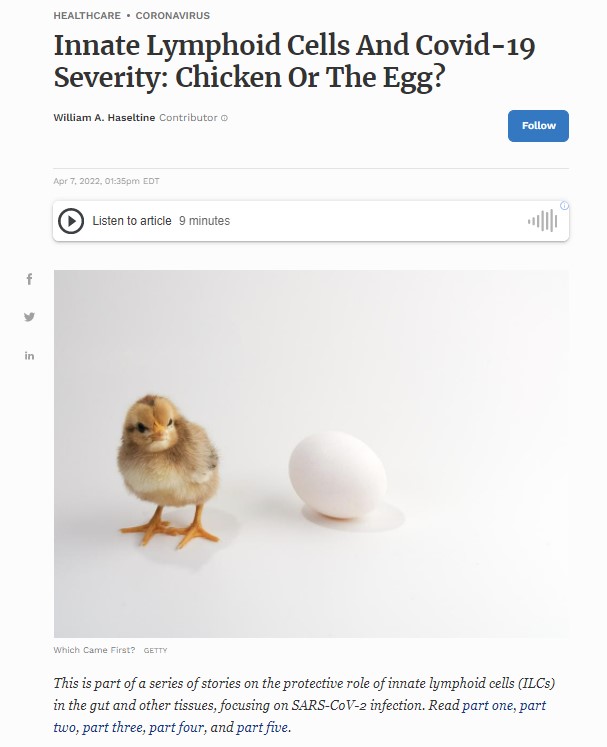 This is part of a series of stories on the protective role of innate lymphoid cells (ILCs) in the gut and other tissues, focusing on SARS-CoV-2 infection. Read part one, part two, part three, part four, and part five.

Recent discoveries point to the importance of innate lymphoid cells (ILCs) in the protection from disease, including Covid-19. New research by Silverstein et al. suggests that lower blood ILC levels may help predict disease outcome. In particular, the decrease of ILCs with age correlates strongly with an increased risk of severe Covid-19. They also show that the difference in concentrations of blood ILCs between males and females may contribute to the increased susceptibility of males to serious disease.

Innate lymphoid cells are generally found in “barrier environments” —areas of our body that are constantly exposed to the outside world, like our lungs and gastrointestinal tract— where they play an active role in regulating homeostasis. This includes responding to invasive and potentially harmful microorganisms.

When faced with an intrusive pathogen, our body’s first priority is to contain it. This is where our immune system comes in, kickstarting inflammation and redirecting immune cells to areas where they are most needed. Both the infectious pathogen so well as our inflammatory response can cause serious tissue damage. So a secondary priority of the immune system is making sure that this damage is kept in check, known as “disease tolerance”. Although disease tolerance mechanisms do not directly engage or eliminate the pathogen, they work to sustain overall host health during infection, curbing disease severity.

In the case of SARS-CoV-2, the amount of virus circulating through a patient’s body, known as viral load, doesn’t neatly correlate with Covid-19 severity; some people, children in particular, can have very high viral loads while remaining asymptomatic or only mildly symptomatic. This suggests disease severity in Covid-19 is determined more directly by age-dependent, disease tolerance mechanisms than by viral replication and viral loads.

Prior studies have indicated that ILCs may contribute to disease tolerance, with one specific subset of the ILC family, group 2 innate lymphoid cells (ILC2s), having an especially active hand. In response to tissue damage, ILC2s can produce a protein called amphiregulin (AREG). By binding to epidermal growth factor receptors (EGFR), amphiregulin helps stimulate cell growth, cell survival, and cell migration. In doing so, ILC2-induced amphiregulin helps repair damaged tissue, maintaining the integrity of the epithelial lining in the lungs and in the intestine.

But determining to what extent ILC levels contribute to Covid-19 severity is trickier than it may initially seem. For one, there are multiple factors that increase the risk of progressing to severe Covid-19. Two of the most common are age and sex: men are more likely than women to develop serious disease, and similarly, the older you are the higher the risk. Added to this is the fact that the levels of lymphocytes —a class of white blood cells made up of T and B cells, as well as ILCs— are already reduced during SARS-CoV-2 infection, a phenomenon known as lymphopenia. Finally, lymphocyte levels also vary according both to age and sex, decreasing with age and lower in men right off the bat.

The challenge for Silverstein et al. was establishing whether blood ILC levels were altered in Covid-19, independently of the aforementioned factors— age, sex, and global lymphopenia. Additionally, whether ILC levels correlated with Covid-19 severity.

To do this, the researchers compared blood samples from three groups: adults hospitalized for Covid-19, adults treated for Covid-19 who didn’t require hospitalization, and a control group of adults who had not been infected with SARS-CoV-2.

The researchers first sought to calculate a baseline for age- and sex-related lymphopenia, giving them a reference point with which to compare the lymphopenia seen in Covid-19 patients. To do so, they collected peripheral blood mononuclear cell readings from 103 SARS-CoV-2-negative blood donors. Peripheral blood mononuclear cells are a large collection of immune cells, including lymphocytes, that circulate in the blood, acting as a first line of defense in response to invading pathogens. The donors ranged from 2 to 79 years of age, with a nearly equal number of males and females.

Silverstein et al. zeroed in on the lymphocyte readings, focusing on the four major subsets: CD4+ T Cells, CD4+ B Cells, ILCs, and CD16+ natural killer cells (NK cells). Although all subsets were affected by age, only ILCs displayed consistently significant differences across all age groups. The median decrease for ILCs was 2-fold every 20 years, with a 7-fold absolute decrease from the youngest age group to the oldest. The age-dependent decrease in ILCs was mirrored closely by the aggressive, age-dependent increase in Covid-19 mortality (Figure 1).

The team of researchers also discovered that ILC levels in males were naturally lower than they were in females (Figure 2). Again, this correlates with the fact that males are more likely to suffer from severe Covid-19 than their female counterparts. No other lymphocyte subset, with the exception of CD4+ T cells, displayed such a pronounced decrease on the basis of sex.

The Lower the ILC Levels, the Higher the Risk of Hospitalization

Next, the group of researchers set out to confirm if lymphocyte levels are actually lower in Covid-19 patients once the effects of age and sex are factored in. They determined that hospitalized Covid-19 patients displayed a 1.33-fold reduction in total lymphocytes among PMBCs as compared to their control group. This included 1.8-fold fewer ILCs and 2.3-fold fewer CD16+ NK cells as compared to the control group (Figure 3). No such significant decrease could be seen in T and B cell levels. For the group of patients with less severe Covid-19, there was no decrease in ILCs and only a slight decrease in CD16+ NK cells.

Silverstein et al. think it’s more likely for low ILC levels to be driving Covid-19 severity, not the other way around. First, unlike other lymphoid cells, ILCs decrease exponentially with age. This decrease is mirrored very closely by an age-dependent, exponential increase in Covid-19 mortality. Second, males naturally have lower levels of ILCs in their blood, including those that produce amphiregulin, and they also happen to have a greater risk of progressing to severe Covid-19. Finally, conditions which independently correlate with lower levels of blood ILCs, like HIV-1 and obesity, heighten the risk of being infected with, and getting severely ill from, SARS-CoV-2.

This work adds to the ever-growing list of research labeling innate lymphoid cells an integral part of the innate immune response. Not only in challenging invading pathogens, but also in contributing to disease tolerance. Hopefully these insights inspire others to pay more attention to ILCs, their multifaceted impact on SARS-CoV-2 infection, and beyond.