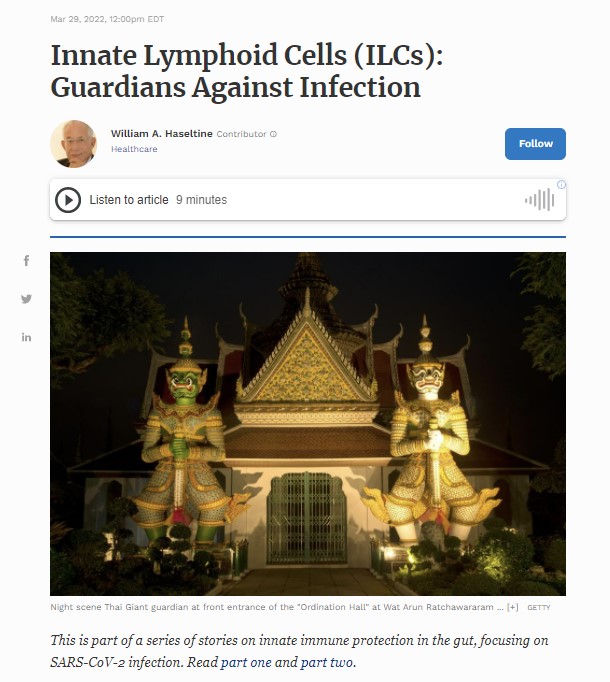 This is part of a series of stories on innate immune protection in the gut, focusing on SARS-CoV-2 infection. Read part one and part two.

Previous articles in this series have discussed our immune responses —innate, adaptive, and trained— and given an overview of the particular immune environment of the human gastrointestinal tract. The gut is especially tricky for our immune system to manage since it’s forced to distinguish between things that should be there, like food and commensal bacteria, and things that shouldn’t be there. This not only means distinguishing self from other, but also distinguishing helpful other from harmful other. No easy feat. Here, we talk about a family of innate immune cells called innate lymphoid cells (ILCs). These cells play an active role in regulating barrier environments like the gut and the lungs. Subsequent articles in this series will zoom in on one particular subset of the ILC family, group 3 ILCs. Specifically, how ILC3s help regulate SARS-CoV-2 infection in the small intestine.

Innate lymphoid cells are the most recently discovered innate immune cells. Hints of their existence emerged during the 1970s —by way of research on natural killer (NK) cells and lymphoid tissue inducer (LTi) cells— but a fuller characterization of the family didn’t arrive until the late 2000s. A lot of previous research on the ILC family has focused on their contribution to autoimmune diseases, especially rheumatic diseases and diseases of chronic inflammation in the gut, like Crohn’s disease. But, the more we learn about these cells, the more we realize they are a crucial part of the innate immune response to microbes across the body. We focus on these protective qualities of ILCs.

In many ways, ILCs act as the innate counterpart to the T lymphocytes found in the adaptive immune response. Like T cells, they play an important role in the modulation of immune homeostasis, response to injury or infection, and repair of damaged tissue. But they are set apart by one major difference: their lack of antigen specificity.

Foreign substances or toxins that enter and have the potential to harm our body are called antigens. Antigens can stem from pathogens like viruses and bacteria all the way to pollen or chemicals. Luckily, our T cells come equipped to recognize basically any and all antigens. Through a process called gene recombination —a kind of random mix and matching of genetic code— T cells develop a surface protein called a T cell receptor. Each T cell has its own unique surface protein with its own unique shape. In theory, for each specific antigen we have a corresponding T cell whose receptor is shaped just right to allow it to bind to the antigen— think of it as a very elaborate and very large system of locks and keys. T cells that have at some point bound to an antigen proliferate and continue to circulate throughout the body for years or even decades after initial exposure. It is through their antigen specific receptors that the cells of the adaptive immune system can form lasting immunological memory, enabling a quicker and more efficient immune response the second time around.

Instead, ILCs depend on cytokine receptors that allow them to pick up changes in their microenvironment in response to tissue damage. They also have an array of other receptors sensitive to microbial products, neuronal transmitters, and nutrient components. ILCs are first and foremost tissue cells, only very rarely found in peripheral blood, and localized mainly around the mucosa of the gut and the lungs.

In total, the ILC family is made up of three groups: ILC1s, ILC2s and ILC3s (Figure 1). They are classified according to their functions. Broadly speaking, ILC1s are in charge of clearing pathogens that have managed to enter our cells. They are defined by their ability to produce interferon gamma (IFNγ). IFNγ is a small signaling protein that serves as the primary activator of macrophages—which recognize, engulf, and digest foreign substances. In general, IFNγ is a foundational component of both the innate and adaptive immune responses, helping to stimulate and modulate them in the face of infection. NK Cells are the prototypical group 1 ILCs.

Group 2 ILCs, on the other hand, are associated with immune activity in helminth infections and also response to allergen-induced airway inflammation. They are defined by their ability to produce interleukin-5 (IL-5) and interleukin-13 (IL-13). Interleukins are another kind of signaling molecule, primarily responsible for the growth and differentiation of different immune cells. Interleukins also have a hand in activating various immune cells, with different interleukins responsible for the activation of different immune cells. In the case of IL-5, it initiates and watches over B cell growth, which ultimately helps stimulate the production of antibodies. IL-13 seems to contribute to the regulation of the inflammatory response, inhibiting the production of inflammatory cytokines when and where needed.

Finally, we have group 3 ILCs, which are predominantly involved in gut immunity. They act as sentinel cells, sending warning signals that trigger immune responses capable of killing not only host cells that have already been infected, but also the actual pathogen causing the infection. ILC3s do this by producing interleukin-17 and/or interleukin-22. Some also activate IFNγ. Figure 2 gives an overview of the role of ILC3s in intestinal homeostasis.

IL-17 stimulates a variety of different signaling cascades that lead to the production of chemokines— signaling proteins that help move important immune cells, like monocytes and neutrophils, to areas where they are most needed. Monocytes are a kind of white blood cell made in the bone marrow. They travel through the blood to various tissues in our body, where they become either macrophages or dendritic cells. Macrophages, as discussed above, actively engulf and kill pathogens. Dendritic cells, in turn, strengthen the immune response by presenting antigens from the invading microorganism to other immune cells, getting them involved in the action. Neutrophils, another kind of white blood cell, are part of the first responders of the innate immune system. They travel to sites of infection and infiltrate damaged tissue. Once there, they engulf and destroy invading microbes. They also release antimicrobial enzymes and peptides, inhibiting the advance of pathogens. Neutrophils also help lay the groundwork for repair of damaged tissues, which is more fully managed by macrophages. In stimulating monocytes and neutrophils, IL-17 promotes inflammation at sites of injury or infection, helps clear invading pathogens, and also initiates the repair of damaged tissue.

IL-22 is also closely tied to the inflammatory response, functioning to moderate cell survival and, importantly, stimulate antimicrobials including defensins and S100 proteins. S100 proteins help defend against pathogens by depriving them of the nutrient metals they depend on for growth and replication, a process known as “nutritional immunity”. They also act as signaling beacons released by damaged or dying cells, calling into action nearby immune cells and kickstarting inflammation. Defensins, in turn, are small peptides with direct antimicrobial abilities as well as immune signaling abilities. In cases of viral infection, they help reduce infectivity by interfering with and inhibiting fusion of virions with host receptors, or, once the virus has managed to enter the cell, by preventing the virus from exposing its genetic material to the host machinery it needs for replication. When confronted with bacterial infections, defensins help stymie the threat by binding to the bacterial membrane and breaking it down or by preventing the synthesis of the bacterial cell wall. They also help neutralize the toxins secreted by bacteria.

Greater knowledge of this system, and how it works, is necessary to understand both SARS-CoV-2 pathogenesis and how to control it late in disease.