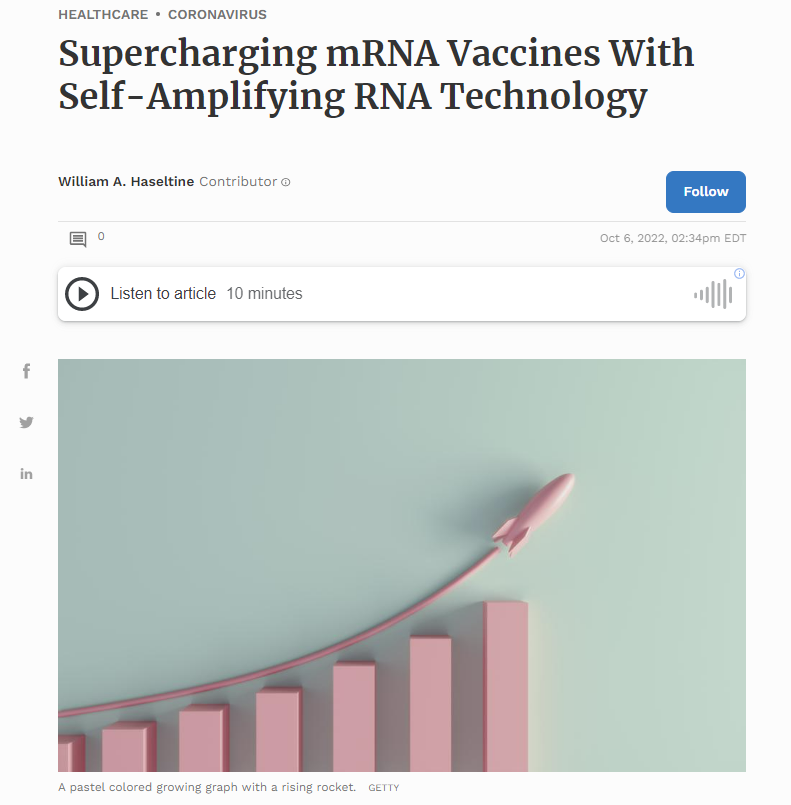 This article is part 2 of a series on next-generation mRNA vaccines. The first installment can be read here.

The unprecedented speed with which we developed vaccines to help us control and curb the Covid-19 pandemic is in large part thanks to years of research on messenger RNA (mRNA) technology. As impressive as this effort has been, and as effective as the vaccines are, it by no means marks the pinnacle of mRNA technology; on the contrary, this initial success has emboldened further innovation, and the next-generation of mRNA vaccines is beginning to take shape. Self-amplifying mRNA (saRNA) represents one such advancement. What are self-amplifying mRNA vaccines and how do they compare to conventional mRNA vaccines? What are the benefits of self-amplifying mRNA?

All of the cells in the human body contain proteins. These are the building blocks of life, involved in almost all of our body’s vital processes. Messenger RNA (mRNA), in turn, is crucial to the synthesis of proteins. Our cells need instructions to build proteins, and mRNA provides the cell the information it needs to make proteins — one mRNA for each protein.

The primary function of a viral vaccine is to expose our immune system to a virus, and its various proteins, in a controlled way, allowing us to build up immunity without causing actual infection. Should we re-encounter the virus down the line, our body is already primed to fight off the infection.

But there are many different ways of exposing our immune system to viral proteins. Live-attenuated vaccines, for example, do so by introducing a live but weakened form of the virus into our body. Inactivated vaccines, like the yearly flu shot, rely on a killed version of the virus — it doesn’t cause infection, but all of the structural elements remain intact, giving our immune system a chance to learn what it needs to effectively combat the virus. Subunit vaccines, in turn, introduce only fragments of the viral particle, usually some part of the surface protein.

Nucleic acid vaccines, which is the umbrella under which mRNA vaccines sit, rely on a different strategy: delivery of genetic material that encodes the target viral protein (Figure 1). Essentially, mRNA is used to instruct our cells how to produce the desired viral protein — or even just a small section of the protein. In the case of Covid-19, vaccines include mRNA that teaches our cells to make the SARS-CoV-2 spike protein, which the virus uses to bind to our cells. Our immune system then recognizes these proteins as foreign entities and quickly gets to work, as it would against inactivated viruses or the wild-type virus itself.

The use of messenger RNA as a vaccine allows for quick manufacturing and rapid upscaling; scientists do not need to spend long periods of time growing full viruses, nor do they even need to spend time producing specific proteins. Instead, they can just chemically synthesize the mRNA that encodes the desired protein, and once injected, our own cells do all of the manufacturing for us by translating the mRNA and producing the corresponding antigen. 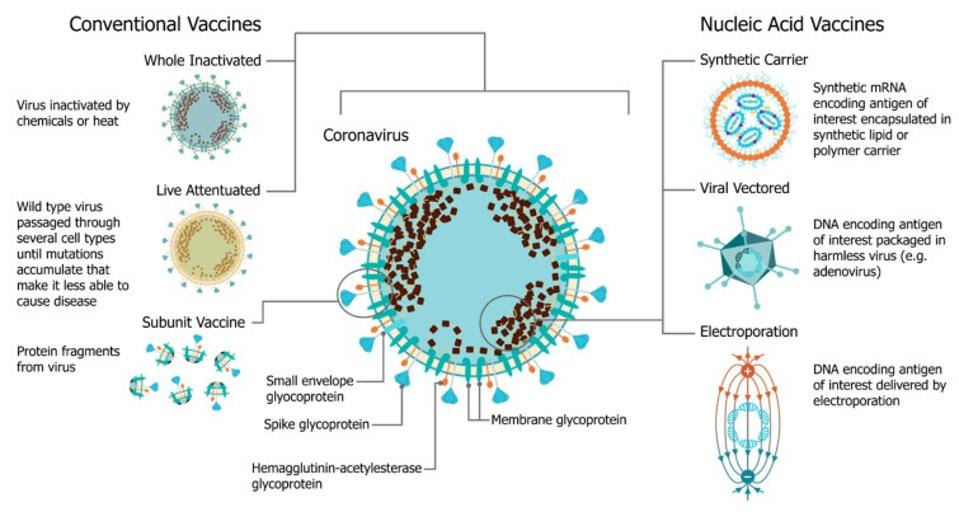 FIGURE 1. A comparison of vaccine platforms including vaccines derived from the virus itself and are formulated as a part or whole modified version of the virus (left) and nucleic acid vaccines, such as mRNA vaccines (right). FROM: “An Update on Self-Amplifying mRNA Vaccine Development” BLAKNEY ET AL. 2021

For a long time, mRNA vaccine efficacy was hindered by serious limitations: mRNA is naturally fragile and prone to instability, and any misplaced mRNA —including extracellular mRNA from vaccines— is easily recognized by the body and subsequently broken down by enzymes. This is where Katalin Karikó and Drew Weismann’s groundbreaking research in the early 2000s comes into play. The two University of Pennsylvania scientists discovered that substituting uridine with pseudouridine, a nucleoside naturally found in RNA, lowers mRNA’s tendency to trigger our immune system while simultaneously improving its stability and translational capacity.

But even when vaccine-derived mRNA manages to avoid detection, it faces another issue: on its own, the mRNA struggles to enter cells. To overcome this, most current mRNA vaccines make use of a protective “bubble” called a lipid nanoparticle. This bubble covers the mRNA, preventing unwanted detection, and helps ferry it into host cells.

The combination of these two breakthroughs forms the basis for today’s successful mRNA vaccines. But there continues to be clear room for improvement. Synthesized mRNA still only stays in our cells for one or two days, at most, before being broken down. The antigen proteins it produces during this period stay around only slightly longer. This means our immune system has a short window of opportunity to educate itself on the nuances of the viral protein at hand — the corresponding immune memory we build up is not as strong as it could be, given more time.

What is Self-Amplifying mRNA Technology?

For the most part, self-amplifying mRNA is very similar in structure to conventional, synthesized mRNA. Both are made up of a genetic sequence that encodes the desired viral antigen. This includes: the two ends of the mRNA called the five- and three-prime untranslated regions (5’ UTR, 3’ UTR) and, a poly(A) “tail” at the end of the 3’ UTR, which stabilizes the structure, and  a five-prime “cap”, which lends the sequence additional structural stability. Self-amplifying RNA vaccines also encode four extra nonstructural proteins derived from an alphavirus that drive self-replication.(Figure 2).

FIGURE 2. Comparison of conventional (A) and self-amplifying (B) mRNA sequences used for vaccine production. Notice the addition of four alphavirus nonstructural proteins in self-amplifying mRNA, which come together to form an RNA replicase. FROM: BANKLEY ET AL. 2021

When an alphavirus infects a host cell, the first section of its mRNA encodes and synthesizes these four nonstructural proteins, which come together to form what is called an RNA-dependent RNA polymerase, or RNA replicase. Think of the RNA replicase like a transportable photocopier, except instead of copying paper it copies viral RNA. As soon as it is finished forming, the replicase begins printing out copies of the viral mRNA, including the downstream, structural proteins — those proteins that actually make up the viral particle. As a result, what was originally one single strand of viral mRNA is continuously multiplied into many copies. These can then all go on to be translated and synthesized into proteins by the host ribosome.

Self-amplifying mRNA technology takes advantage of this transportable mRNA photocopier by swapping out the alphavirus structural proteins with the desired vaccine antigen. The same mass-production of mRNA occurs, but this time with mRNA that encodes the vaccine antigen (Figure 3). The result?  More copies of mRNA and therefore more copies of the target antigen, expressed for a longer time. 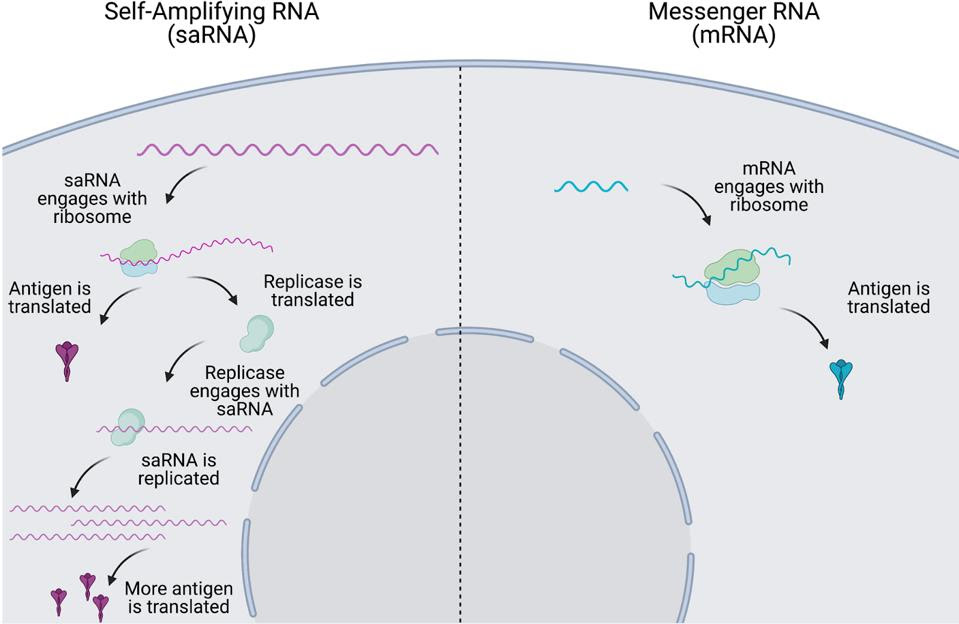 Like mRNA vaccines the manufacture of self amplifying mRNA is entirely synthetic. Manufacturing does not require growth in any living cell. It is entirely a chemical process. Production is rapid and flexible and can be adjusted rapidly to respond to new demands. The manufacturing infrastructure and quality control are greatly simplified as compared to traditional vaccines and are affordable for low income countries.

The self-amplifying mRNA vaccines do not require chemically modified nucleotides —the substitution of uridine with pseudouridine— as once the RNA enters a cell it begins to continually produce new copies of messenger RNA to replace those degraded. Hence, the raw materials are unrestricted and widely available.

This also means that much less mRNA can be used per vaccine dose, allowing for even quicker and cheaper production. Compared to the Pfizer/BioNTech and the Moderna mRNA vaccines, which use 30 and 100 micrograms, respectively, a recently tested sa-RNA vaccine used only 0.1-10 micrograms — this means the same batch of RNA could produce between 10 and a thousand times as many doses of saRNA vaccines as conventional mRNA vaccines.

The requirement for lower doses offers the opportunity to create a variety of different antigens in one vaccine. A single dose may include several variants of the same virus or of different viruses and even bacterial antigens.

Self amplifying mRNA vaccines may not require liquid nanoparticle formulations. In subsequent installments of this series, we will describe two new vaccines, one composed of naked unmodified RNA and another in which the RNA is located outside, not within, the lipid nanoparticle.

The last and possibly most important difference is that self-amplifying mRNA vaccines produce the antigen for 20 to 26 days compared to the relatively short period of 2 to 3 days, as is typical of conventional mRNA vaccines. The length of exposure to an antigen can make a qualitative difference. Longer exposure to an antigen allows the antibody response to mature, to make higher affinity more potently neutralizing antibodies, as well as antibodies that may elicit cellular cytotoxicity as well. Moreover, longer antigen exposure is important for generating memory T cells required for long-lasting memory. As a consequence, self-amplifying mRNA vaccines offer the promise of enduring  protective immunity from infection and disease.

The installments of this series will describe the use of self-amplifying RNA for the design of Covid-19 vaccines.