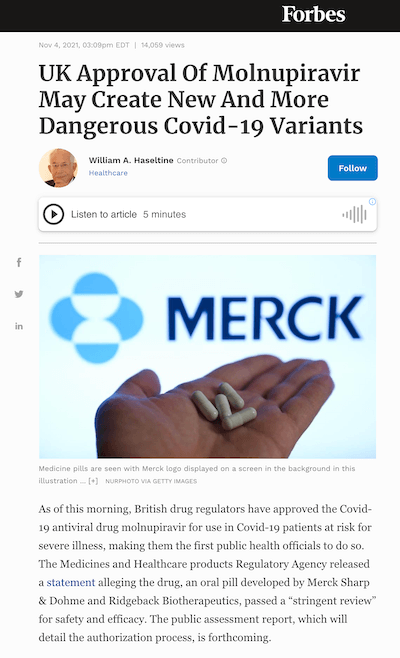 As of this morning, British drug regulators have approved the Covid-19 antiviral drug molnupiravir for use in Covid-19 patients at risk for severe illness, making them the first public health officials to do so. The Medicines and Healthcare products Regulatory Agency released a statement alleging the drug, an oral pill developed by Merck Sharp & Dohme and Ridgeback Biotherapeutics, passed a “stringent review” for safety and efficacy. The public assessment report, which will detail the authorization process, is forthcoming.

In October Merck announced that in a global clinical trial, molnupiravir reduced hospitalizations and deaths in Covid-19 patients by nearly 50 percent. The drug, given twice a day for five days, has since been bought up in bulk by governments around the world, including the United States. But missing from the official statements issued by UK regulators and pharmaceutical companies is any mention whatsoever of the potential mutagenic effects of molnupiravir on the virus itself, which I have outlined in a recent article for Forbes. The question isn’t only whether mutagenesis is dangerous for those who swallow the pill. It is a danger to the entire world population, and a glaring blindspot for the review committees involved.

Molnupiravir works by tricking the virus into using the drug for replication, then inserting errors into the virus’ genetic code once replication is underway. When enough copying errors occur, the virus is essentially killed off, unable to replicate any further. If the pill is administered to millions, which will likely be the case if this authorization is the first of many, it could introduce mutations to the virus itself that are significant enough to change how the virus functions, but not so powerful as to stop it from replicating and becoming the next dominant variant.

It is assumed that when used at the optimal concentration, the drug will prevent onward transmission of virus. Although that may be the case, we know what happens in laboratory studies when the virus is exposed to suboptimal doses. It produces multiply mutated viable variants, the conclusion evident based on data from a major research paper from 2019. When two coronaviruses, MERS-CoV and the mouse hepatitis virus (MHV), were tested against the active form of molnupiravir, a gaggle of mutations were identified across the genomes. With a half life of only 3.5 hours, it is probable that the drug, within 24 hours of administration at low concentrations, won’t sufficiently counter the survivability of the fast-mutating virus. The possibility for harmful mutagenesis was enough to convince another pharmaceutical company, Pharmasset, to abandon their own studies of the drug back in 2003. Another antiviral drug that works similarly to molnupiravir, favipiravir, also has not received US regulatory approval as a treatment for influenza.

The study of MERS-CoV and MHV shows how wildly the virus mutates in culture, but we have no data on whether this is true for live virus in animals and people. In my opinion, fast-tracking molnupiravir for mass use without collecting further data on its mutagenic potential for the virus is a grave mistake that could lead to the emergence of supercharged variants more dangerous and life-threatening than what we’ve witnessed thus far. The companies behind the drug must provide data on the effects of mutagenesis at suboptimal doses in primate and rodent models. At a minimum, the virus should be thoroughly examined and characterized in Covid-19 patients receiving the treatment to compare the rate of mutation with patients who aren’t on the treatment course. The fact that this isn’t a firm requirement could very well be considered negligence on part of the pharmaceutical companies and regulatory committees, given the magnitude of the dangers that await us if the virus assumes more lethal forms.

The UK authorization of molnupiravir was greenlit on the basis of its ability to reduce the risk of hospitalization and death of Covid-19 patients. What we need to know before moving forward, however, is the risk of this drug to the world. Viable alternatives that are at least as effective, if not more so, at treating early symptomatic Covid-19, particularly monoclonal antibodies, some of which may be administered by simple subcutaneous injections. There are several other drugs that don’t have this disadvantage that may be approved shortly.

If we were to devise a method for creating more transmissible and virulent viruses, approving molnupiravir worldwide would be one of the best ways I can imagine doing so. As we wrap up our second year living through a global pandemic, that is the last thing we need.