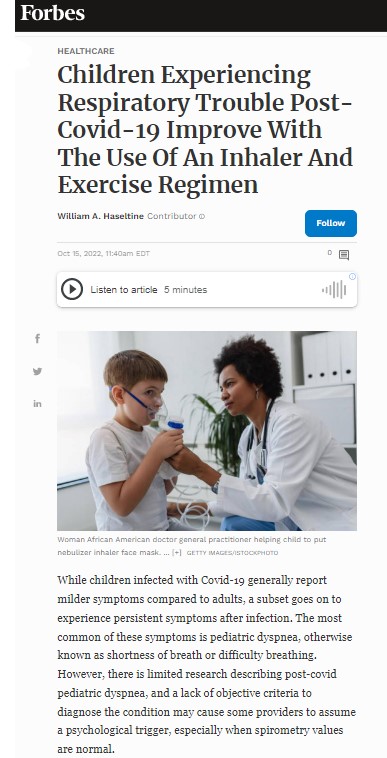 While children infected with Covid-19 generally report milder symptoms compared to adults, a subset goes on to experience persistent symptoms after infection. The most common of these symptoms is pediatric dyspnea, otherwise known as shortness of breath or difficulty breathing. However, there is limited research describing post-covid pediatric dyspnea, and a lack of objective criteria to diagnose the condition may cause some providers to assume a psychological trigger, especially when spirometry values are normal.

A new case study published in the Journal of Allergy and Immunology highlights the importance of investigating beyond spirometry value and not assuming a psychological component for the best possible patient outcome. I’ve outlined a summary of the case study using the pseudonym “John” for the patient.

In November 2020, 17-year-old John found himself with a sore throat. The next day, he experienced coughing, abdominal pain, myalgia, and chest tightness. He took a rapid antigen test and confirmed that he was positive for Covid-19. He prepared himself to ride the grueling wave of infection.

Over the next three weeks post-infection, John became easily fatigued. He developed a severe case of shortness of breath and a lower tolerance for exercise, which persisted over the next 5 months. He set an appointment with his primary care provider and was later prescribed a fluticasone metered-dose inhaler 110 and an albuterol metered-dose inhaler, both of which are typically used to treat lung diseases like asthma. He later switched over to a fluticasone/salmeterol 115 metered-dose inhaler. On medication, John noticed an improvement in exercise tolerance; he was proud to walk on the treadmill for 5 minutes before feeling winded.

John had no medical history of wheezing episodes or recurrent bronchitis. He has never been diagnosed with asthma and was not allergic to 23 aeroallergens. His normal forced expiratory volume (REV) in 1 second was 97%, which was above the normal of 79%, and his FEV to forced vital capacity ratio was 0.81, which was also above the normal of 0.79. John did not have any significant anxiety or depression. So, what happened?

John developed moderately increased hyperinflation, with a normal residual volume to total lung capacity ratio of 24, which is below the normal of 30. Through impulse oscillometry testing, he showed an increased percent of peripheral airway resistance at 44% total airway resistance, when the average is less than 30%. Additionally, there was significant reversibility of small airway reactance at 56% below baseline, which is higher than normal (less than 40% below baseline). John’s results suggested small airway dysfunction, which is commonly observed in asthma. He left the hospital with a different prescription and recommended a gradual increase in exercise.

In 3 months, John saw a notable improvement in exercise and shortness of breath. He attributed his positive results to physical conditioning, diet changes, and better adherence to his medication regime. Oscillometry testing showed a lower peripheral airway to total airway resistance ratio (down to 12.5% total airway resistance). John had a slight, but still high reversibility of small airway reactance when given albuterol. Overall, this showed that small airway obstruction and airway hyperinflation greatly influenced labored breathing and exercise intolerance.

John’s experience is among the many children with post-covid dyspnea and low exercise tolerance whose health improved following physician intervention. At National Jewish Health, the leading respiratory hospital in the US, children with post covid dyspnea were evaluated, and a majority were found with increased residual volume and/or residual volume to total lung capacity ratio, a high proportion of peripheral to total airway resistance, or large AX reversibility -all signs indicating airway obstruction. When prescribed an inhaler and exercise regimen, most children saw their health gradually improve with treatment duration. Although some symptoms resolved due to the disease prognosis, providers believed that the treatment advanced the recovery rate.

Covid-19 may persist beyond infection, lasting months, and contribute to respiratory complications. For the best possible health outcome, you should visit a specialist if your child or teen has trouble breathing during and following Covid-19 infection. They can recommend an appropriate course of treatment to help your child recover. If that provider suggests a psychological trigger, encourage them to investigate further or find a new provider.