Key Player In Acute And Chronic Disease: The Inflammasome 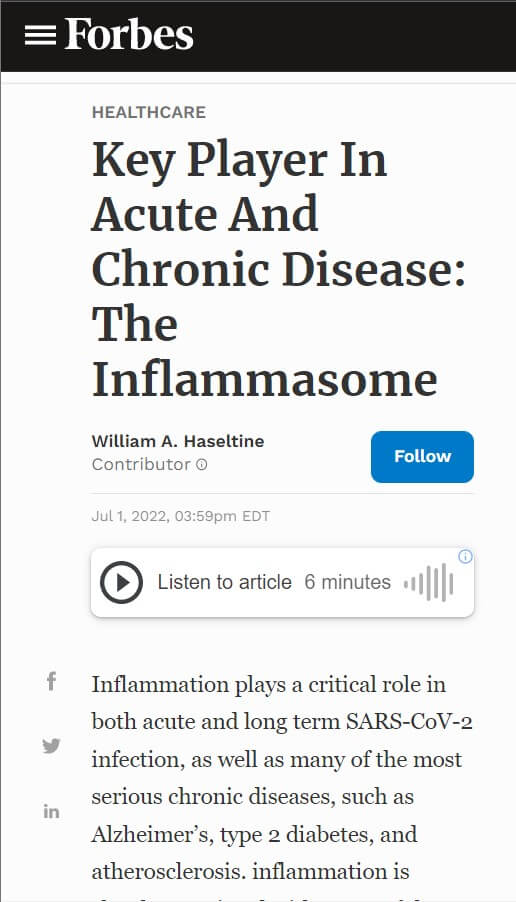 Inflammation plays a critical role in both acute and long term SARS-CoV-2 infection, as well as many of the most serious chronic diseases, such as Alzheimer’s, type 2 diabetes, and atherosclerosis. inflammation is closely associated with many of the illnesses associated with aging. New methods to control inflammation are essential to approach short and long-term consequences of SARS-CoV-2 but many of these serious diseases as well. Fortunately, there are new approaches in the works. In the second part of this series, we will discuss a new drug that has the potential to neutralize inflammasome activity without compromising its obvious benefits. Here, we will do a breakdown of inflammasomes as well as explain its relation to interleukin cytokines and gasdermin-D.

When your body is injured, the area may swell and turn red. It can feel warm to touch and sometimes painful to move. That’s inflammation, one way your body reacts towards disease, injury, or broken tissue, and done with the intent to repair and protect. As inflammation continues, however, it begins to damage or harm your body. If not properly taken care of, uncontrolled inflammation may lead to severe forms of illness, including Alzheimer’s, type 2 diabetes, and atherosclerosis.

Numerous efforts have been made to help treat inflammation prior to its negative impacts on the body. In the first installment of this series, we will lay the groundwork of inflammation. In the second part of the series, we will discuss a recent approach devised that can potentially mitigate the effects of chronic inflammation.

Abundant to the body, inflammasomes are multiprotein complexes that are activated upon detection of a pathogen or damaged cells. The inflammasome is composed of a sensor, adaptor, and caspase-1 protein that enables its ability to trigger a form of inflammatory cell death (pyroptosis) and the release of particles responsible for inflammation (inflammatory interleukin-1 cytokines). See Figure 1.

Once activated, the sensor enables the assembly of the inflammasome. In most types of inflammasomes, the sensor will cause the adapter protein, the apoptosis-associated protein with a caspase activation and recruitment domain, to form a nucleus. This interaction leads to the adapter protein to rearrange into a cross-linked star-shape complex called specks (Sharma & Kanneganti, 2016; Guo et al, 2015; Bertheloot et al, 2022).

The adaptor protein is known as apoptosis-associated protein with a caspase activation and recruitment domain (ASC protein). Previous studies have shown that this inflammasome component amplifies inflammatory signaling and can function independent of the caspase protein (Fernandes-Alnemri, T. et al, 2007; Ellebedy et al, 2011; Tsuchiya et al, 2014). However, it must assemble into its speck configuration to function (Franklin et al, 2014).

Interleukin-1 family cytokines serve as signaling molecules for innate and adaptive immune systems. They interact with a variety of receptors and induce responses to counter infection. An imbalance to IL-1 cytokines can lead to a number of autoinflammatory disorders (Arthur et al, 2012; Franklin et al, 2014). Efforts to counter the negative effects of abnormal IL-1 cytokines have either focused on the cytokines themselves or their direct receptors. Due to its critical role in host defense, the inhibition of IL-1 cytokines risks greater and more severe infection.

Upon activation by the caspase-1 protein, gasdermin-D protein assemble to form pores in the plasma membrane of a cell. As shown in figure 4, pore formation originates from an arc or slit-shape beginning; the pore itself is also very stable. The size and number of these pores release interleukin cytokines from the cell and trigger inflammatory cell death (Bertheloot et al, 2022; Ramos-Junior & Morandini et al, 2017; Ding & Shao, 2018). In fact, the pores in the cell membrane get so large that the speck conformation of the adapter protein can leave as well, along with other key particles necessary for cell survival.

In the next section, we will discuss a new approach to drugs that can directly inhibit inflammasome activity, thereby reducing inflammation in not only CoV-2 but many other diseases as well.