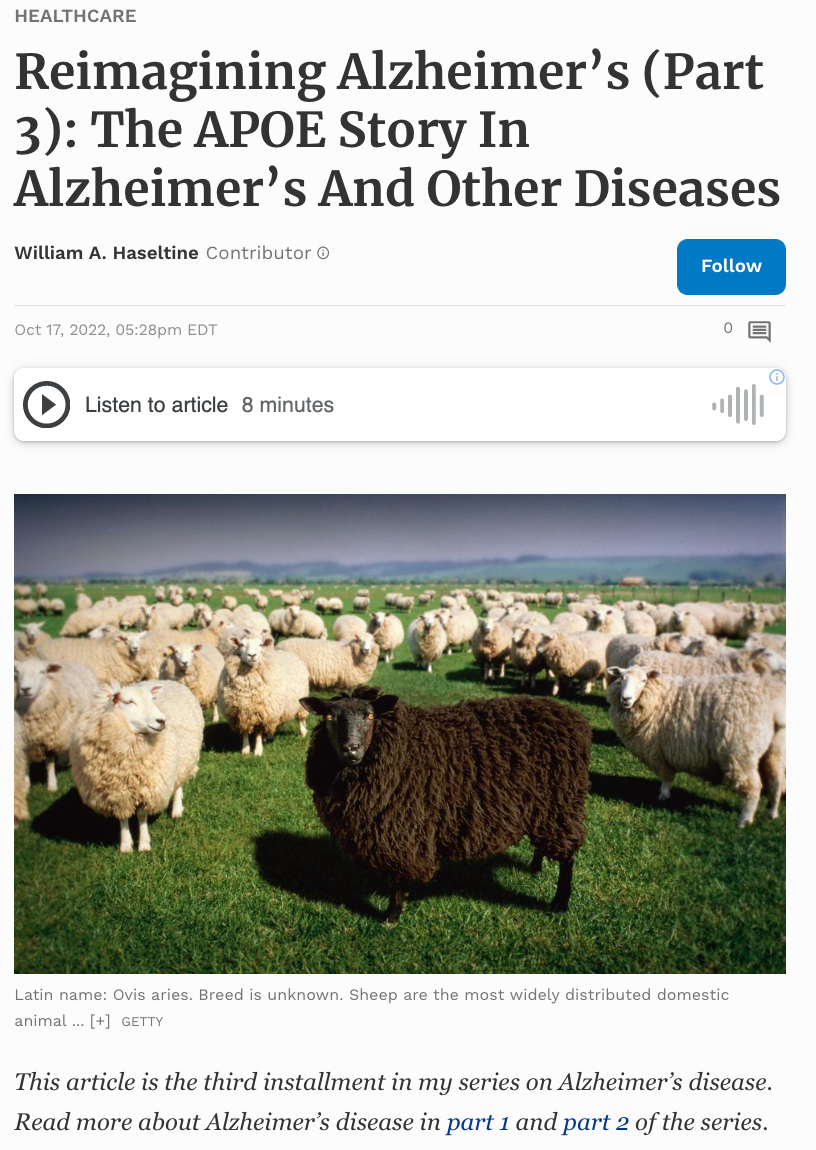 Alzheimer’s is a serious disease that affects nearly 6 million people in the United States. Interestingly, some people have a much higher chance of developing Alzheimer’s than others, especially as they age. A principal risk factor of Alzheimer’s disease depends on a single gene called Apolipoprotein E (APOE). By having two copies of a particular APOE variant called APOE4, you become twenty times more likely to develop the disease. Although APOE4 is not the only inherited cause of Alzheimer’s, it is by far the most predominant. For this reason, APOE demands some special attention as to what it is and how it works.

APOE proteins are an essential component of our body’s ability to process fats/lipids. APOE proteins collect the circulating lipids in the body and help distribute them across cells. In the brain, APOE is produced by cells called astrocytes. Astrocytes are one of the most abundant cells in the brain and play a supportive role for neurons and their signals. When APOE proteins are formed in the brain, they collect several lipids in the body to form lipid complexes. Then, the APOE proteins bind to receptors on the surface of cells. This allows the cells to internalize the free-floating lipids and use them to form structural components of the cells or to store them as free energy.

A secondary responsibility of APOE is that it helps the body process and distribute cholesterol. Much like how the protein distributes fats to cells, APOE is also responsible for collecting free-floating cholesterol and distributing it among cells in the body. Cholesterol is an essential component for cell membranes and can help cells produce hormones in the body. It is also a major determinant of heart disease.

While lipid and cholesterol processing are very important functions of APOE, studies have suggested that APOE may play a significant role in regulating inflammation as well. Recent research suggests that APOE regulates one of the primary inflammation pathways in the brain—the classical complement cascade— by binding to a protein complex called C1q.

Variations in the APOE gene

APOE may play an essential role in the body, but what is its association with Alzheimer’s disease? There are three known variants of the APOE gene: APOE2, APOE3, and APOE4. Each of these variants has its own important physiological consequences for those who carry them. This is especially relevant to those who contain two copies of the same variant.

APOE2 is the rarest variant and its physiological consequences are somewhat unknown. Interestingly, studies have suggested that APOE2 may play a protective role against Alzheimer’s disease. There is evidence to suggest that containing even one copy of the APOE2 gene can reduce risk of Alzheimer’s disease. Other studies have found that APOE2 is associated with a greater risk for diseases such as type 2 diabetes and psoriasis.

Where did these variants come from? Approximately, 7.5 million years ago, primates and humans split into two unique species. The APOE4 variant was one of the first APOE variants that were found in the hominid line but not in primates. Over the course of the next few 100,000 years, the APOE gene continued to mutate and create the two other major APOE variants that exist in modern day.

These mutations began approximately 220,000 years ago. The APOE4 variant underwent a single amino acid substitution mutation. The building blocks of proteins in the body are amino acids. When a single amino acid is changed, this can affect the overall function and structure of the protein. For APOE4, an uncharged cysteine amino acid was substituted with a positively charged arginine amino acid. This resulted in significant physical changes and subsequently formed the APOE3 variant.

This observation is especially true across different populations. For instance, while the Nigerian population has the highest percentage of individuals with the APOE4 variant, it has one of the lowest occurrences of Alzheimer’s disease.

This suggests that there are several other genetic or biological factors that play a role in determining whether an individual develops Alzheimer’s disease.

While none of the APOE variants are associated with Alzheimer’s disease 100% of the time, if your family members have Alzheimer’s, it is advisable to undergo genetic testing to understand your own APOE profile. Genetic tests are relatively straightforward and can be done through a simple blood or saliva test. DNA from these samples is then isolated and specific genes within the DNA can be detected.

There is more research to be done about the variants of APOE and how they affect the onset of Alzheimer’s disease. Fortunately, the foundational knowledge and science that exists today allow us to understand the risks of developing Alzheimer’s disease and hopefully, prepare for the future.