Salt, Fat And Sugar: How Americans Became Addicted To Eating 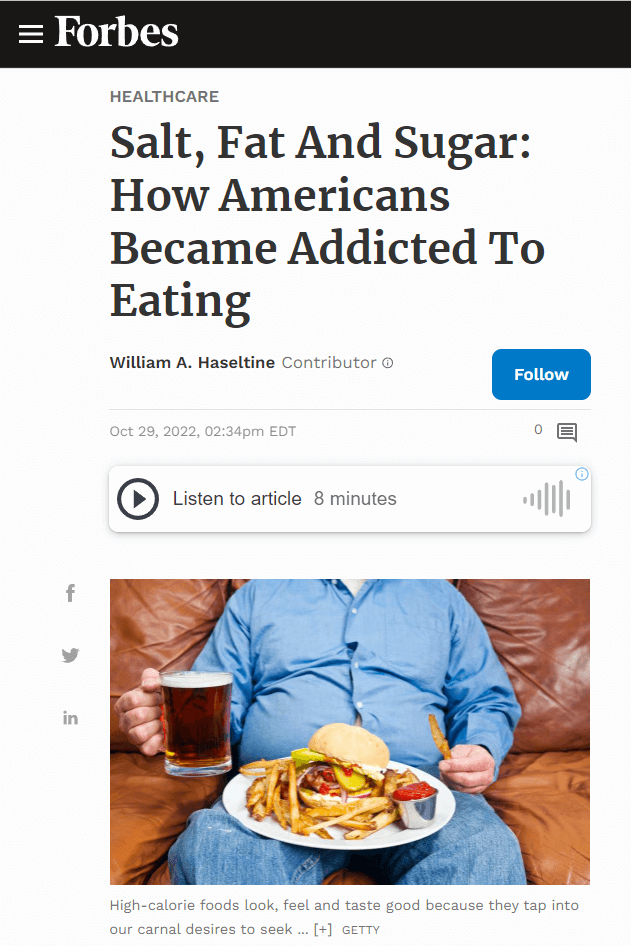 “Why can’t I stop myself from overeating?” This is a question that for many cannot be answered simply by a lack of motivation, or genetics. It is the feeling of wanting to eat that last bite of dessert, even though you know that you were full halfway through dinner. Logically, you know that your body does not need any more food, but there seems to be an internal force that fixates on how good that next bite will taste.

David Kessler, in his New York Times Bestseller The End of Overeating, describes how the American food industry constructed and continues to profit from this dissociation. The former FDA commissioner lays out the science behind high-caloric food and the brain’s reward systems that has led to an epidemic of overeating. Although more than a decade has passed since this book was published, millions of people continue to struggle with chronic overeating that for some has led to uncontrollable weight. The compulsion to overeat often does not neatly fit into any defined eating disorder. As a result, individuals are blamed for their own lack of motivation to control their weight.

Restraining yourself from eating junk food is difficult because that is how it was engineered. This is something that Dr. Kessler writes about firsthand. Regardless of the numerous studies that reveal how sugar and fat hijack your brain’s reward system to crave more, even the former FDA commissioner and physician admits that its pull can sometimes be too much to resist. In this first installment of a multi-part series on the science behind why we overeat, we highlight the lessons from The End of Overeating and Dr. Kessler’s own love/hate affair with food.

Simply put, overeating is defined as eating more food that your body needs to the point where you feel uncomfortably full. Many of us can recall a time when you were on vacation or at Thanksgiving dinner where you loosened your belt buckle or undid the first button on your pants to make room for another plate of food. Overeating happens unconsciously and often people do not realize that they have eaten beyond their body’s needs until it is too late.

Overeating can be a symptom but not, in of itself, be diagnosed as an eating disorder. In extreme cases of binge eating disorder, for example, a person experiences episodes where they compulsively eat large amounts of food in a short period of time, to the point where it causes significant emotional distress. In an effort to offset the consequences of weight gain, an individual may be compelled to purge or take other drastic steps to avoid weight gain. Most people that overeat do not qualify for binge eating disorder. Unless you feel like you cannot physically control yourself from eating and feel a sense of shame or guilt during and after binge eating episodes, then you likely do not have this serious medical condition. Even though overeating is not a defined eating disorder, people that routinely overeat may still experience a lot of anxiety surrounding food.

Individuals that appear to be overweight or obese are not the only ones affected. Even people with a relatively normal weight can struggle with a preoccupation with food. Individuals that are prone to overeating often describe feeling like they cannot stop thinking about food. Immediately after finishing a meal, they cannot help but think about the next meal or thing to snack on. Their entire day seems to revolve around eating.

What makes some people prone to overeat and not others? Although genetics plays a role in weight maintenance, there is no “fat gene.” In fact, for most of human history, weight across the population remained relatively stable. Obesity was a rare occurrence, and the majority of people ate only until they felt satiated. In the past hundred years, however, the commercialization of the food industry and the outsourcing of home cooked meals to restaurants dramatically increased the weight of the average American. Food not only became more accessible, but it also became a lot cheaper to produce. To cut costs even further, the food industry increasingly incorporated cheap sugar and fat into the American diet. As Dr. Kessler argues, “the problem is not weight, the problem is what we’re eating.”

It’s Not You, It’s The Food Industry

The American diet is designed to appeal to all your senses. Think of your favorite fast-food chain. The first step into the restaurant you get a whiff of that all too familiar smell of grease that automatically makes your mouth water. As you study the menu, plump images of artistically curated dishes draw your attention. Should I also get a side of fries? Those milkshakes look good, too. Just as you place your order, you hear the sound of burgers sizzling on the grill and potatoes entering the fryer. Oh, this is going to be good. In no time, your order is ready. You search for the perfect table, fantasizing about how good that first bite will be. And it is. The first bite melts into your mouth, taking almost no effort to chew. The perfect combination of salt, fat and sugar dances across your taste buds. It goes down almost too easily and before you know it you have eaten hundreds of calories in just one meal.

The food industry knows what we like and how to keep us coming back. In his book, Dr. Kessler talks directly to leaders of some of the most successful chains across the country. “What creates irresistibility is caring, attention, visual appeal, and the appeal of aroma, texture, and consistency,” says Jerilyn Brusseau, the woman behind Cinnabon. “Those fat-on-sugar-on-fat-on-salt-on-fat combinations generate multiple sensory effects. Which is just what the industry wants,” Dr. Kessler adds.

It is not just fast food. Let’s take a Snickers bar. A nougat cookie bar baked with loads of sugar and fat is then covered with peanuts that are fried in more oil and coated in salt. If that was not enough, a heavy layer of caramel is poured onto the nougat before the entire bar is dipped into a thick milk chocolate mixture. How can anyone resist?

In his book, Dr. Kessler extensively interviews Gail Vance Civille, a food consultant that serves as the founding president of Sensory Spectrum Inc.. “The genius of Snickers, explained Civille, is that as we chew, the sugar dissolves, the fat melts, and the caramel picks up the peanut pieces so that the entire candy is carried out of the mouth at the same time,” Dr. Kessler writes.

High-calorie foods look, feel and taste good because they tap into our carnal desires to seek pleasure. Like sex or drugs, it targets areas in our brain that keep us wanting more, even after our stomachs are full.

We cannot eliminate the reward pathway that drives our desire to eat, nor would we want to. Unlike other high-salience stimuli like drugs and alcohol, we need to eat every day to survive. Being aware of these reward pathways, may help us understand why some foods are irresistible and how we may be able to override the impulse to overeat. Admittingly, that is easier said than done. Next in this series, we will take a closer look at how sugar, fat and salt hijack our brains to keep us wanting more.