Unraveling hope for Prion Disease and Other Progressive Neurodegenerative Diseases 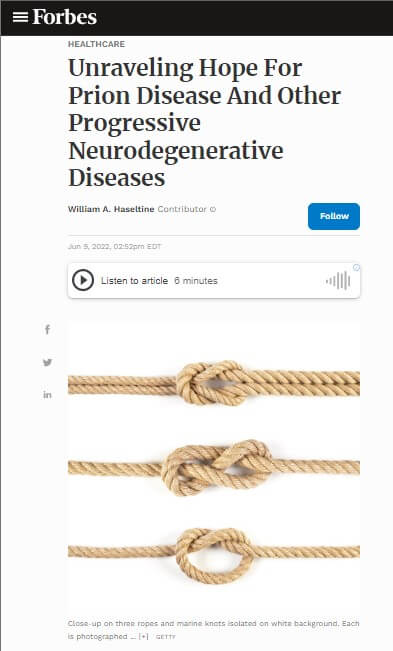 The normal cellular host protein PrPC holds an intrinsic property to fold. When it folds differently, the protein undergoes a conversion to the pathogenic PrPSc conformation (Figure 1). Specifically, the protein loses some of its alpha helical nature and becomes greatly composed of beta-pleated structures, which are prone to aggregation. The infectious particle can consequently accumulate in the brain and have detrimental impacts in cognition. PrPSc also replicates like an inanimate crystal; devoid of genetic material, PrPSc auto-catalyzes and triggers a chain-like  reaction to produce more of itself. PrPSc is also known to ravage through the brain, creating a sponge-like (spongiform) appearance.

At present, there are no cures available to treat prion disease. Novel work done by Mead et al. however provides a glimmer of hope regarding an approach to treat patients with Creutzfeldt-Jakob disease.

They designed a monoclonal antibody as a potential treatment for Creutzfeldt-Jakob disease. However, unlike most others who create antibodies that bind to aberrant protein, Mead and colleagues designed an antibody that stabilizes the normal protein precursor. If successful, this may prove to be a valuable approach for treatment for a number of similar diseases, including Alzheimer’s.

What is Creutzfeldt-Jakob disease?

Creutzfeldt-Jakob disease is a rapidly progressive neurodegenerative disease that causes dementia and ultimately death. This devastating disease affects one person per million per year. In the United States, that is roughly 320 cases annually. However, because it is very difficult to diagnose, researchers and health care professionals speculate that its prevalence may be inaccurate.

Patients followed a gradual dosing schedule of PRN100 and were assessed using the MRC Disease Rating Scales. Beginning at 1 mg/kg, PRN100 doses were administered in 2 to 6 day increments with the maximum dosage of 80 to 120 mg/kg administered every two weeks. Their scores were then compared to those obtained from the National Prion Monitoring Cohort observational study that served as controls. Based on literature precedent, researchers aimed for a 50nM concentration of PRN100 in the cerebrospinal fluid.

With a small sample size and limited stock of drug availability in mind, researchers saw promise in the preliminary data. Two patients passed away before 50nM of PRN100 was reached (patients 3 and 5, both of whom were diagnosed with sporadic Creutzfeldt-Jakob disease); however, the scores from the MRC Prion Disease Scales from three patients did stabilize when there was a 50nM or higher concentration of  PRN100 (figure 2). Their careful gradual dosing approach contributed to the average of 47 days to reach 50nM of PRN100 in the cerebrospinal fluid and clinically significant neurological decline among patients with sporadic Creutzfeldt-Jakob disease during that period. For additional context, the median survival for patients with sporadic Creutzfeldt-Jakob disease in the National Prion Monitoring Cohort observational study was 25 days from their respective enrollment into the study.

Based on the autopsy of patients 2 and 3 (diagnosed with iatrogenic and sporadic Creutzfeldt-Jakob disease, respectively) reported no evidence of cytotoxicity, lymphocytic inflammation, or increased formation of vacuoles. There was a striking decrease in PrPSc immunoreactivity in the parietal and occipital cortex, change in PRPSc distribution in the subventricular areas, and an accumulation of amyloid in the arteries in the brain (cerebral amyloid angiopathy) in patient 2 compared to the untreated patients with iatrogenic Creutzfeldt-Jakob disease (figure 3). Mead and colleagues attributed the cerebral beta amyloid angiopathy to be the result of treatment, however, they report no amyloid-related imaging abnormalities in any patient.  The autopsy of patient 3 also had different PrP labeling in the periventricular regions in comparison to the historical controls. Mead and researchers also observed PRN100 in the patient’s brain tissue to be similar in concentration observed in the cerebrospinal fluid (well above concentrations shown to clear cells of PRPSc infection).

Although their results are highly preliminary, it does seem that the alternative approach of Mead et al stabilizing the normal protein that is the pathogenic form may be promising for a large number of neurological diseases.