35B5: A Potent, Broadly-Neutralizing Monoclonal Antibody Effective Against All Known Variants 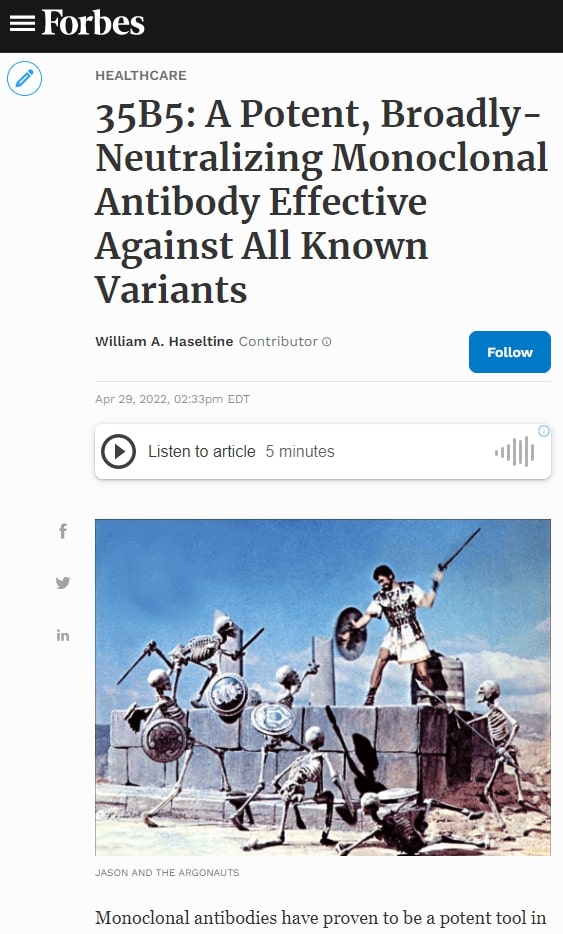 Monoclonal antibodies have proven to be a potent tool in our ability to prevent and treat SARS-CoV-2 infections. The current epidemic is driven in part by naturally occurring variants that elude vaccine-induced and monoclonal antibodies. The search is on broadly neutralizing antibodies. Here we describe one such antibody recently reported by Wang et al. in Japan.

In a previous study from earlier this year, Wang et al. attempted to discover broadly neutralizing monoclonal antibodies that would be effective against both existing and future variants. Their experiments took place in the latter stages of the Delta surge of infections. Sorting the B cells for immune memory of the SARS-CoV-2 receptor-binding domain, they found a match.

Wang et al. cloned the monoclonal antibody 35B5. They then analyzed the neutralizing capacity, finding that 35B5 potently neutralized not only the SARS-CoV-2 wild-type but also a broad spectrum of variants, including Beta and Delta, leading the researchers to investigate the structural-functional mechanisms of 35B5 in greater detail.

After the rise of the Omicron variant, Wang et al. repeated their experiments in the context of the new variant. They observed 35B5 exhibiting binding efficiency to Omicron comparable to Delta and the SARS-CoV-2 wild-type, as well as trimer dissociation. The authors note that Omicron’s binding efficiency with 35B5 is slightly weaker than the wild-type likely because of a hydrogen bond between the antibody and N481 in the receptor-binding domain, which is impaired in the Omicron Fab interface.

In a neutralization assay, they found that both pseudotype and authentic Omicron viruses were potently neutralized by 35B5. While Omicron was not neutralized as effectively as Delta or the wild-type, it was still efficient enough to disable the virus.

Despite dozens of mutations in the Omicron Spike receptor-binding domain and N-terminal domain, 35B5 still binds tightly over a footprint of 29 interacting residues. These residues interact via salt bridges and hydrogen bonds to allow for interaction between the antibody and the Spike.

One crucial glycan that 35B5 interacts with is N165. One of the functions of glycans is to shield the virus particle beneath, but N165, along with N234, also possesses a unique responsibility. These two act together as a molecular switch to control the Spike conformational transition. The Spike alternates between up and down conformation based on whether it is currently infecting a host cell. The two glycans clamp the two sides of the receptor-binding domain and enable the trimer to alter between the up and down configurations, acting as a switch. The 35B5 antibody displaces N165 from its binding pocket, disabling the switch mechanism, like breaking a light switch lever.

What makes this antibody so exciting is the conservation of the N glycans across SARS-CoV-2 genomes. Of the 10.5 million SARS-CoV-2 genomes in the GISAID database, only 3,129 contain a mutation at position N165 or less than .03%. The same can be said about N234, which only displays a mutation in 1,723 viruses or less than .02%. This suggests that 35B5 could have neutralized over 99% of the viruses circulated since the start of the pandemic, meaning they could be a great tool for variants yet to come. Additionally, the mutations in Omicron are far from the 35B5 epitope, suggesting an additional advantage to 35B5. Because the 35B5 epitope residues are highly conserved, it is unlikely that Omicron RBD mutations interfere with 35B5’s virus neutralization.

This is not the only antibody that recognizes highly conserved sequences in the Spike. We note that Zhou et al. describe two antibodies that target conserved sequences in the Omicron Spike: Ly-CoV1404 and S2E12. Additionally, Li et al. describe the CV3-25 antibody, which binds a linear epitope in the S2. We suggest that a combination of 35B5 and CV3-25 might be ideal for the prevention and treatment of Covid-19. Similar combination antibodies that bind both the membrane-associated protein and the receptor-binding protein display broad neutralizing activity against most of the existing strains of Ebola. Such a combination antibody therapy for Covid-19 could be a successful path for treatment and prophylaxis against current and future strains of the virus.