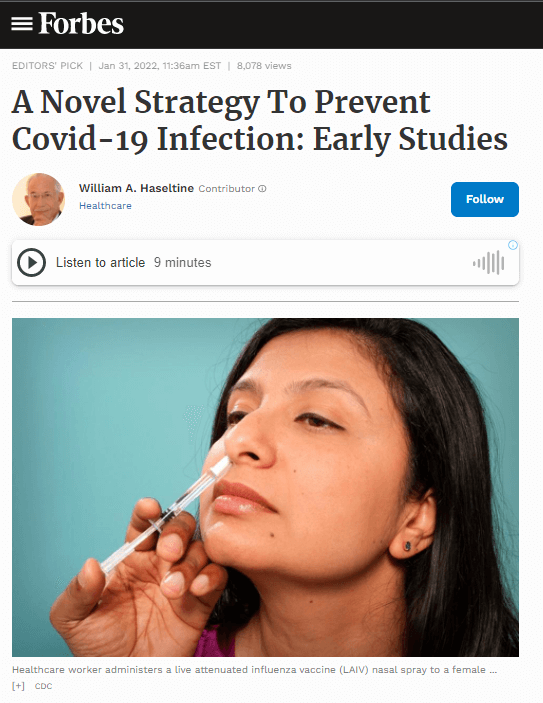 A new approach to Covid-19 vaccinations may slow the spread of infection. We all know by now that current vaccines are not effective in preventing infection against Omicron. Although these vaccines may protect people from severe disease for a year or more, they are only effective for preventing infection for a few months. A new report suggests that there may be a way to not only protect against severe disease but also reduce the risk of infection. One weakness of intramuscular injections is their inability to block the virus at the primary site of infection— the nasal passages. As a result, researchers at the University of Hong Kong are exploring a novel vaccine strategy aimed at increasing antibody activity throughout the respiratory system and supporting long-term protection against infection. This approach consists of a two-step process— injection plus intranasal booster.

The two-part vaccine strategy first employs an intramuscular DNA vaccine. Similar to the mRNA vaccines produced by Pfizer and Moderna, this injection exposes the immune system to part of the SARS-CoV-2 spike protein used for viral entry into host cells. In the presence of this viral antigen, the immune system produces neutralizing antibodies to protect against future infection. The second part of this two-part strategy is administered through a nasal spray. Researchers constructed a viral vector from plasmid DNA commonly used for intranasal flu vaccines and genetically engineered them to also express part of the SARS-CoV-2 spike protein. In animal studies, intranasal vaccines have been variably effective in blocking viral replication before a virus has an opportunity to infect cells. While the first injection provides some systemic protection against the virus, an intranasal Covid-19 booster can strengthen immunity directly at the site of infection.

For the first phase of this vaccine approach, Zhou et al. manufactured an intramuscular injection of a DNA vaccine. A sequence expressing SARS-CoV-2 receptor-binding domain (RBD) joined to a programmed cell death protein (PD1) gene sequence was fused to a pVAX plasmid backbone (RBD- PD1-DNA). The SARS-CoV-2 RBD, which appears as spike proteins on the virus’s outer surface, is a short fragment from the virus that binds to ACE2 receptors on host cells to gain entry. Preventing these proteins from binding to cells is an important target for developing neutralizing antibodies. Fusion of the PD-1 domain to the RBD antigen encourages T immune cells to bind onto the viral antigen and induce an immune response. To facilitate protein expression of the RBD antigen, a CMV promoter and human tissue plasminogen activator (tPA) were also inserted, as shown in the figure below.

Packaging the viral antigen within a plasmid DNA allows the manufactured vaccine to reach the cell’s nucleus for synthesis of the viral RNA to begin. The viral RNA is transported into the cytoplasm, where ribosomes transcribe RNA into proteins. The corresponding viral proteins are then displayed on the surface of immune cells to alert the immune system to begin producing antibodies. If the individual is later exposed to the virus, immune cells recognize the viral spike proteins and readily fight infection before it spreads.

Direct injection into the muscle optimizes the vaccine to reach important immune cells in muscle tissues, which then deliver viral antigen to the lymph nodes, the main hubs for initiating immune responses. Over time, however, the immune system’s memory of the spike protein weakens and immunity declines. A booster vaccine can strengthen immunity by reintroducing the viral spike protein into the body.

The second phase of this vaccine strategy exploits the influenza virus’s ability to enter the body through the nasal pharynx. Derived from viral vectors commonly used for intranasal flu vaccines, researchers created an intranasal booster spray using strains of live attenuated influenza virus vaccine (LAIV). Against the flu virus, intranasal vaccines have been effective in not only producing an immune response in the nasal passage but also providing systemic immune protection.

The mucosal immune system triggers adaptive immune responses that block pathogens from invading nasal tissue. Immunoglobulin A (IgA) antibodies are at the forefront of this defense system, working to bind onto and neutralize foreign pathogens. In contrast, systemic immunity induced by vaccine injections largely protects the inner body and primarily recruits Immunoglobulin G (IgG) antibodies found circulating in the blood. Intranasal LAIV are specifically designed to stimulate the production of mucosal IgA antibodies in the nose, blocking the flu virus from attaching to host cells. Animal studies suggest that nasal vaccines can enhance both mucosal and systemic immunity.

To protect against Covid-19 infection, LAIV were modified to express the SARS-CoV-2 RBD gene. Using a pHW2000 viral plasmid backbone, an RBD antigen was fused into a NS1 gene-deleted segment between two noncoding regions (NCR). As illustrated in the figure below, the RBD domain was linked to a human plasminogen activator (tPA) and a V5 tag to allow the immune system to better detect the viral gene segment. Two strains of intranasal LAIV DelNS1-RBD were derived from surface protein sequences of corresponding H1N1 and H3N2 influenza subtypes: LAIV-CA4-RBD and LAIV-HK68-RBD.

This method takes advantage of well-established routes for flu vaccination and modifies it to boost protection against Covid-19 infection. When administered through a fine mist, this harmless viral vector stimulates IgA production in nasal mucus and supports systemic immunity throughout the respiratory system.

The most successful vaccination strategy first exposed mice subjects to an intramuscular vaccine injection followed by an intranasal booster 21 days later. This prompted enhanced mucosal immunity, particularly in nasal tissues, and systemic immunity in the upper and lower respiratory pathway. When they were later exposed to Covid-19, mice in this experimental group had no detectable amount of the virus in their nasal passages, compared to mice that received two intramuscular injections or two intranasal vaccines. Furthermore, in contrast to other experimental groups, these mice experienced no loss in weight and displayed only mild injury to respiratory tissue.

All vaccinated mice had some protection against the virus, as indicated by increased levels of IgG antibodies found in blood and other bodily fluids. Mice that received a vaccine injection followed by a nasal booster, however, had the greatest protection against Covid-19. These mice displayed the highest and most sustained recruitment of viral antibodies 90 days after the initial injection. It is important to note that only the mice who received the prime boost had enhanced levels of IgA antibodies collected by nasal swab samples. IgA levels were not sustained long-term in mice that received two intranasal vaccinations, suggesting that a heterogenous injection plus nasal booster strategy is most effective in promoting mucosal immunity.

Additional experiments from this study confirmed that the mice given a vaccine injection then an intranasal booster have a significantly higher frequency of CD8+ T cells in both the lungs and nose, which positively correlated with an increased prevalence of neutralizing antibodies.

The long-term protection of this vaccine and booster regiment correlates with the recruitment of memory CD8+ T cells, a type of white blood cell that induces cell death in infected tissues. These cells continuously circulate throughout the body, so that when a foreign pathogen is encountered, they become activated to prevent the spread of infection. CD8+ T cells are critical for preventing the growth of cancer tumors and defending against viral infection. Because they are antigen specific, encountering the viral antigen again generates an enhanced immune response within these long-lived immune cells. CD8+ T cells continue to hold a memory of the viral antigen for a long time, allowing them to readily activate when exposed to the virus in the future. Therefore, vaccine regimens that capitalize on this adaptive immune mechanism are particularly effective at preventing infection anywhere from a few months to years.

The next step for research is human trials to capitalize on the double barrel effect of this vaccination strategy. Currently, Covid-19 booster shots remain an integral part of our infection prevention strategy, alongside masking in crowded spaces, physical distancing and self-quarantine following a positive test. To control the spread of infection more effectively, future vaccines should aim to boost immunity directly through the nose and upper respiratory system. As long as the virus is able to easily spread throughout the population, emerging variants will continue to overwhelm our healthcare system.