A Primary Defense Against SARS-CoV-2: Defensins 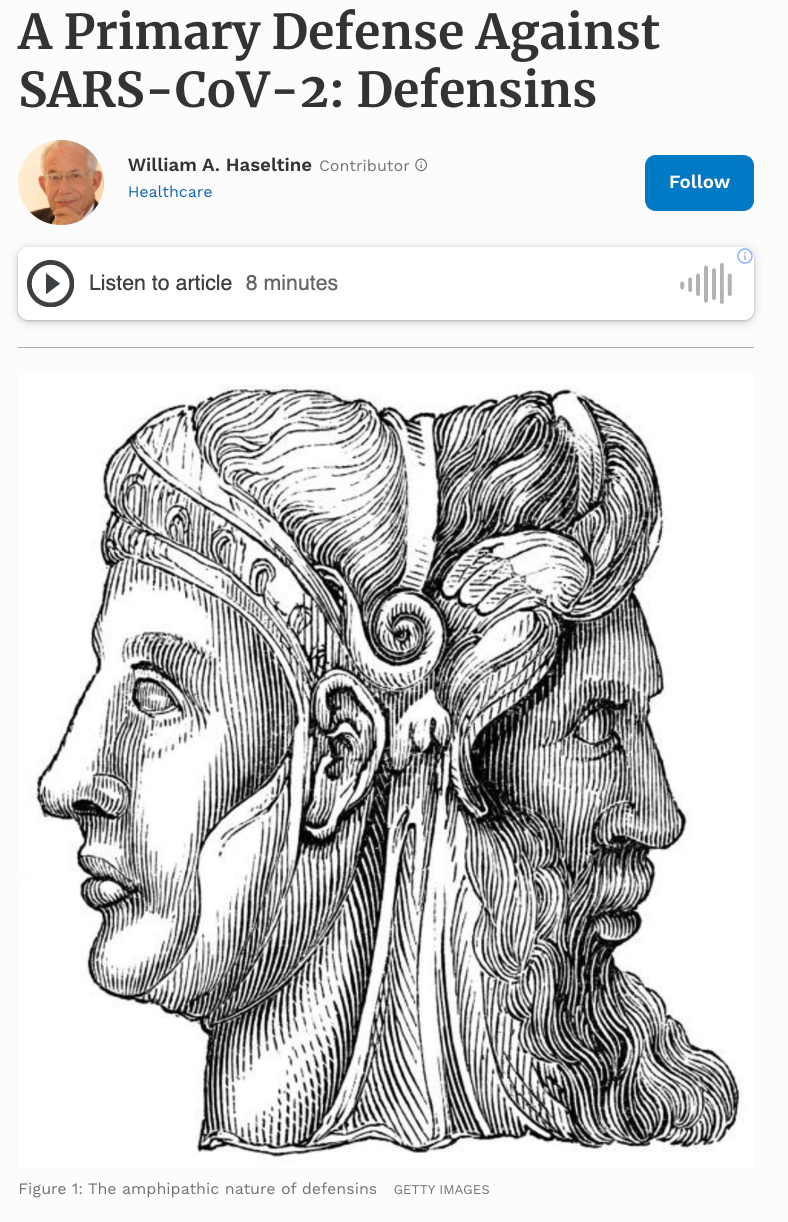 This article is an extension of a previous series which is now available as an anthology in the book, “Natural Immunity and Covid-19: What it is and How it Could Save Your Life”. Here, we introduce part 1 of a small series about defensins—small molecules which help protect us against infectious disease.

One of the most important layers of our body’s defense against SARS-CoV-2 lies in our innate immune system. The innate immune system protects our body from microbes, viruses, bacteria, and parasites that we have not previously encountered. While much of public attention and awareness of human immunity is focused on adaptive or learned immunity, innate or natural immunity accounts for why most people who are infected with SARS-CoV-2 have few, if any serious symptoms.

Now, a family of molecules called defensins are the latest to be implicated in our natural defense against SARS-CoV-2.

Defensins are an ancient family of proteins that can be traced far back into our evolutionary history and are active in most multicellular organisms. In humans, they are found throughout the body and are classified into either alpha defensins or beta defensins based on their structure. Alpha defensins are further classified into human neutrophil peptides (HNPs) or human defensins (HDs). There are four forms of human neutrophil peptides (HNP 1-4) and 2 forms of human defensins (HD 5-6). HNPs 1-4 are produced by neutrophils in the circulatory system, while HD 5-6 are produced by Paneth cells. Paneth cells are specialized epithelial cells that line the surface of the small intestine.

Many beta defensin genes have also been discovered in the human genome, however, only three have been classified at the functional level. These are human beta defensins 1-3 (HBD 1-3) and they are produced by epithelial cells in multiple organs.

Defensins are considered antimicrobial peptides and are known to defend against bacteria, fungi, and viruses. While some defensins directly kill invading microbes, others are adept at recognizing infected cells and killing them before infection can spread to healthy cells.

Now, recent research has shown that some defensins may play a role in suppressing SARS-CoV-2 infection.

How do Defensins work?

Defensins stave off microbial infections through a wide variety of mechanisms. However, the most frequently cited mechanism is membrane disruption. Defensins can kill cells by inserting themselves into the cell membrane to create holes in the membrane. This causes the contents of the cell to leak out, resulting in cell death.

One of the most potent features of defensins is that they are Janus-faced—one side of them is positively charged while the other side is negatively charged. This makes them amphipathic molecules and allows them to interact favorably with any membrane’s charges to cause membrane disruption and cell death.

The question that remains is: do any defensins have a similar effect on SARS-CoV-2? Recent research suggests yes.

Surprisingly, they found that four alpha defensins exhibited significant anti-SARS-CoV-2 activity. These were: HNP-1, HNP-2, HNP-3, and HD5. HNPs 1-3 suppressed infection by 50% while HD5 suppressed infection by 60%. All four defensins were effective at physiological concentrations of each molecule. HD6 also blocked SARS-CoV-2 infection, but only at a much higher concentration that was out of physiological range, indicating that it may not be as effective against SARS-CoV-2 in the body.

When this experiment was repeated with spike proteins from the SARS-CoV-2 variants Alpha and Gamma, researchers found that the defensins were less effective at suppressing infection, suggesting that these variants were more resistant to the defensins.

So how do defensins prevent SARS-CoV-2 from entering the cell? A separate study conducted by Wang et al. at the Army Medical University in Chongqing, China may have the answer.

This study marks significant progress in our understanding of how innate immunity protects us against SARS-CoV-2. As we continue to delve deeper into how defensins prevent SARS-CoV-2 infections, we may discover new avenues for medications and treatments.

One of the key defensins identified in both Chuan et al. and Wang et al. is HD5. HD5 is highly abundant in the intestine and its production is triggered by the release of cytokines.

In a paper published by researchers at the Pasteur Institute, scientists made an interesting discovery. They found that invading microbes in the gut can activate a molecule called interleukin-3. When interleukin-3 is activated, it produces pro-inflammatory cytokines which trigger the production of HD5.

The intestine already contains multiple methods of defense against viral infection. Its mucous membrane surface makes it more difficult for the virus to attach to ACE2 receptors. The adaptive immune system also provides a high level of protection by producing the antibody immunoglobulin A (IgA) which is transmitted across the surface of the gut epithelial cells to prevent infection.

Now, these studies indicate that the intestine contains a vigorous innate immune system that responds to SARS-CoV-2 by activating interleukin-3 and triggering the production of HD5. Since HD5 has antiviral effects and can kill infected cells, this innate immune reaction may explain why the intestine seems to be especially protected from the effects of SARS-CoV-2.