A Snapshot Of SARS-CoV-2 Evolution: Observed Increase Of Infectivity In The Covid-19 Virus 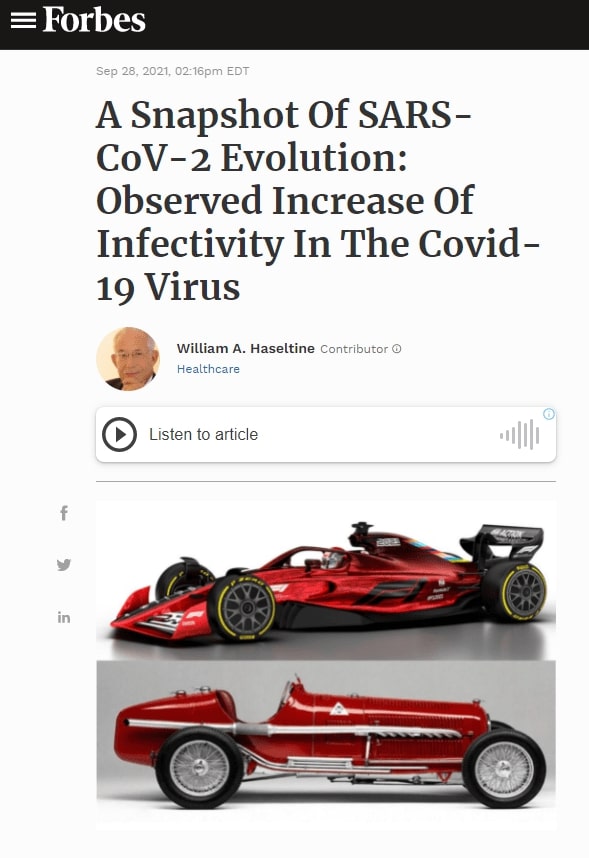 A sports car today is far more advanced than those from the 20th century.

A recent scientific report underscores how rapidly SARS-CoV-2 adapts to selective pressure. The experiments examine how rapidly the virus can adapt to life in a Petri dish. The results are startling, explaining in part the emergence of an entire Greek alphabet of variants over that past year and a half. No matter what the original source, the virus becomes 100 times more infectious, and does so in short order. No wonder new variants seem to pop up no matter where or when we look.

The experiments follow a hallowed tradition of medical science: passaging dangerous human pathogens multiple times through non-natural hosts to derive altered viruses that may be used as a vaccine. That is what Louis Pasteur did to develop the first Rabies vaccine and what Max Theiler did to develop the first and only vaccine for Yellow Fever. It does not always work that way. Sometimes the virus that emerges from multiple passages in animals in Petri dishes is more dangerous than the original. For example, serial passaging of alphaviruses results in mutations that, in some cases, result in higher neurovirulence in mice. The same can be said for feline enteric coronavirus, which when passaged multiple times, results in furin cleavage mutations that correlate with transformation to a more pathogenic biotype.

Shiliaev et al. use two different sources of virus. The first was a sample as close to the original Wuhan strain they could find, designated WA1/2020. It had been grown successively (passaged)  four times on cells in Petri dishes. The second source was derived from a DNA copy of the GenBank sequence NC_045512.2, a clone closely related to the Wuhan strain. To recover infectious virus, the DNA was first transcribed into RNA then introduced into a cell that constitutively produced the N protein.

In both cases, both virus stocks were remarkably heterogeneous.  The first evidence of heterogeneity is dramatic variation in plaque size, the dimensions of the clear area of dead cells surrounding infection of a single virus particle. Figure 1A and 1B show the variation in plaque of the Wuhan strain (1A) and the cloned strain (1B) when grown on Vero E6 cells. Moreover, the ratio of total virus particles (the genome equivalents-GE) to those viruses capable of infecting cells in culture and in forming a plaque (The plaque forming units —PFU) was low, roughly 27.6 compared to over 1000 in the unpassaged viruses.

The viruses were then passaged. Viruses were introduced to Vero E6 cells with the human ACE2 receptor in five rounds. They infected the cells, were allowed to spread, then diluted and reintroduced. They repeated this process for the two different viruses five times.

Through several of these passages, the researchers noted that infectivity rose dramatically, as demonstrated by the ratio of genome equivalent to plaque-forming units (GE:PFU) decreasing starkly. In original virus stocks, the great majority of the viruses were incapable of infecting and forming plaques, whereas in the passaged viruses, the GE:PFU ratio was much closer to one, a 100-fold increase in the particle to infectivity ratio. Both virus stocks when passaged only five times became far more infectious, as measured by the plaques forming test.

The mutations resulting in the 100-fold more infectious viruses were dramatic changes in the structure of the gene that encodes the Spike protein. After the final passage of the live virus, they find a high prevalence of an insertion of 21 nucleotides in the N-terminal domain coding sequence. This insertion added the peptide GLTSKRN (glycine-leucine-threonine-serine-lysine-arginine-asparagine) between Spike protein positions 214 and 215. Additionally, they found S247R (serine to arginine) downstream in the N-terminal domain and H655Y (histidine to tyrosine) in the furin cleavage region.

Measurements of the ratio of the full-length genome to the cleaved protein show that the changes in and around the furin cleavage site decrease the efficiency of cleavage by the furin, but do not eliminate the site altogether. However, the mutations still allow the passaged viruses to be fully infectious as they do not change the second cleavage site earlier in the Spike genome.

Notably, the researchers found that the mutations were already present in low frequencies. After five rounds of passaged, those mutations were selected as favorable for the virus.

In the cDNA passaged virus, different mutations were observed. Before passaging, there was a collection of small and large plaques, but then after five passages, all large plaques were observed. The GE:PFU ratio dropped dramatically, as in the live virus. Though the researchers found different mutations: the S686G mutation directly following furin cleavage and the I68R and N74K mutations in the in vitro N-terminal domain.

As demonstrated by Figure 5, the researchers found that in the clone, mutations were again found in low frequencies among the early rounds of passaging. Those mutations that conveyed significant advantages to the virus were selected in greater frequency as passages advanced while those that were not advantageous were left behind.

Consequences of the Mutations

These mutations impose similar results on the passaged cDNA virus. The N-terminal domain mutations increase the overall positivity of the region, albeit less so than the live virus insertion, and the furin cleavage mutation reduces furin cleavage. We can therefore conclude that SARS-CoV-2, whether naturally passaged or passaged in vitro, will replicate and mutate rapidly in Vero E6 cells containing the human ACE2.

The authors then speculate that the N-terminal domain mutations allow the virus to bind more tightly to negatively charged glycans on the surface of cells. They test that by testing the binding affinity of the virus to bind to negatively-charged molecules that resemble the glycans called heparin. The passaged viruses bound to heparin more tightly, and thus the cell surface glycan. Binding to these negatively-charged glycans can facilitate infection, as facilitated by the N-terminal domain mutations.

Let us pause to understand exactly what was happening in these experiments. When we describe a virus, such as Wuhan, Alpha, Beta, we are not measuring a pure collection of viruses. Viruses exist as a swarm, or quasi-species as described by Manfred Eigen, each of which contains slightly different mutations from the set, despite originating from the same strain. This is why some viruses from the same strain can form small plaques versus large plaques. This is a critical distinction, as the population of viruses in an infected person are not uniform, but represent a collection of slightly different viral genomes.

Passaging in culture has a powerful selection of the properties of the virus that emerge. Pre-existing variants emerge rapidly under these conditions. If that is the case, what then does the sequence of a variant mean? The published sequence is an average of the viruses in the collection. The description of any particular variant is the average of the predominant mutations in that particular viral isolate, whether derived from patient blood samples or culture passaging.

We have seen this process in immunosuppressed patients that developed long Covid-19. The virus continues to adapt to the patient’s weakened immune systems, selecting mutations continuously to avoid detection and expulsion.

The cDNA experiment additionally allows us to conclude that even in cloned viruses, the RNA polymerase used to transcribe the clone makes transcription errors. These errors may occur in low probability, but if present are selected and propagated throughout a virus swarm.

This same phenomenon occurs in nature as well. When SARS-CoV-2 infects a host, they begin to make copies of themselves. Each copy has, on average, three different mutations. In nasal fluids, the concentration of virus per milliliter in the Wuhan strain is 108 particles/mL (100,000,000). For the Delta variant, it is 1,000 times larger (1011 or 100,000,000,000 particles/mL). Therefore, there are between 300 million and 300 billion mutations per mL in an infected person.

These mutations are selected via passage for viability, stability, infectivity, and replication capability, meaning each passaging infection selects a more virulent virus. This is how variants arise. Given these numbers, it should be no surprise that variants arise so frequently.

Three final questions on this research:

First, is the SARS-CoV-2 virus selected in tissue culture also more infectious in animals, including humans? That could be tested in mice, hamsters, and primates, and those answers would be instructive.

Second, the authors only examine the Spike protein. Under natural selective conditions, the virus varies along the entire length of the genome, both synonymous and nonsynonymous mutations in the Orf1ab proteins, structural proteins, and regulatory (accessory) proteins. Does viral selection mutate amino acids in the 29 other viral genes? Might some of the changes in infectivity be attributed to these changes?

Finally, there has been controversy over potential “gain of function” experiments. The live SARS-CoV-2 in these experiments is far more infectious, at least in human cells, than some of those strains circulating around the world. There is a history of these viruses being even more pathogenic in animals than in cell culture.

For instance, deletions in the furin cleavage site in the feline enteric coronavirus increase pathogenicity in animals. There are some strains that emerge from passage that acquire neurotropism, causing brain disease. The natural and clone viruses in Shiliaev et al. both contain furin cleavage mutations that may have a similar proclivity.