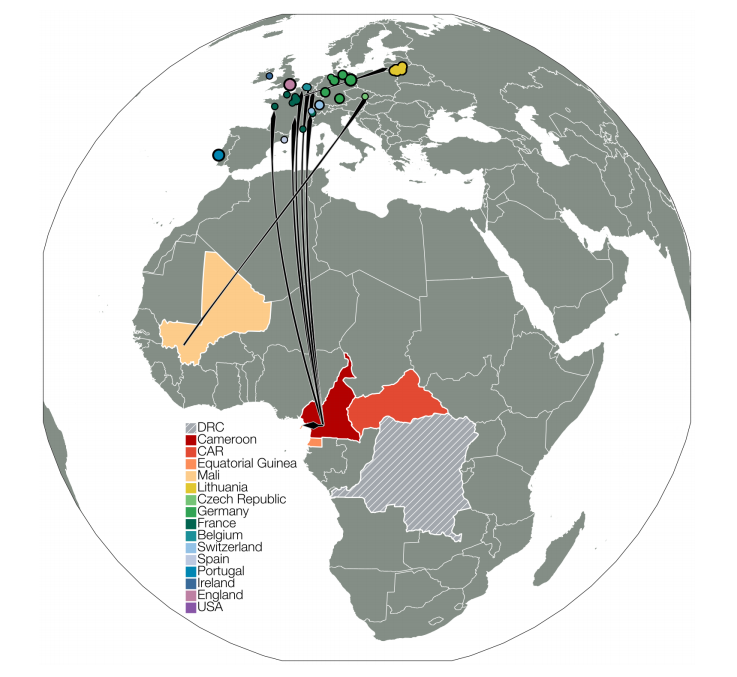 Travel records of passengers infected with the B.1.620 variant.

As Dudas et al. suggest in their analysis of the B.1.620 variant, despite the variant first being detected in Europe, flight records and patient data suggest that it likely emerged in the Central African Republic and Cameroon. As passengers traveled between these African countries and European nations like Lithuania, Germany, and France, the variant created a foothold and spread in Europe. This reinforces the probable origin of the B.1.620 variant in Central Africa and the global nature of this pandemic. Covid-19 disease anywhere is of grave concern for everyone.

As of yet, there are only 278 sequences of B.1.620 in the GISAID virus database, but there are likely many more cases throughout Europe and Africa. At the time of writing, Lithuania is within the top eight of rates of confirmed Covid-19 cases per day, according to the New York Times coronavirus tracker. The B.1.620 variant may be a force behind their high case rate due to its mutations.

These mutations are displayed in the figures below in both the spike protein and the larger genome. There are 13 mutations in the S protein and 7 in other proteins in the genome. We have color-coded these figures to show unique mutations to B.1.620 in black, mutations in common with B.1.1.7 in red, and mutations found in other variants of interest in blue (Figures 1 and 2).

FIGURE 1: B.1.620 spike mutations with those that are unique to the variant in black, those in common with B.1.1.7 in red, and those found in other variants of concern in blue.

FIGURE 2: B.1.620 mutations external to the spike protein with those that are unique to the variant in black, those in common with B.1.1.7 in red, and those found in other variants of concern in blue.

The authors summarize these graphics in the following chart, showing the mutational differences and similarities between B.1.620 and other variants of interest and concern (Figure 3). 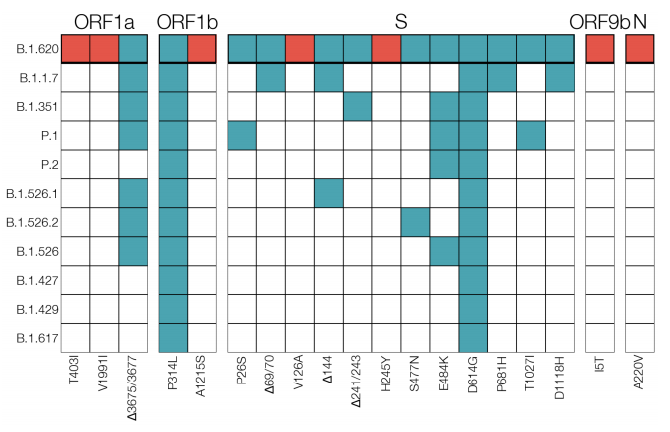 There are a few mutations of special interest in the B.1.620 strain. These are the mutations S477N, E484K, and P681H. The S477N and E484K mutations occur in the receptor-binding domain and have been previously shown to affect avidity, the virus’s ability to resist neutralization, and the virus’s ability to replicate to higher titers. The P681H mutation lies in the cleavage region of the spike protein, which contributes to the transmissibility of the virus. These three mutations, in different ways, may work in concert to create a more infectious and immune-evasive virus.

Among the unique mutations to B.1.620, two are located in the N-terminal domain and others are located outside of the spike protein, which is commonplace in SARS-CoV-2 variants. More specifically, these mutations are found in NSP2, NSP3, and NSP13 of ORF1ab, ORF9b, and the nucleocapsid protein. The mutation labeled P314L in figure 3 is typically labeled P323L in NSP12 as we have done in figure 2, which is common to nearly all strains circulating today.

What is the potential origin of this virus? Citing Occam’s razor, the simplest, and therefore the most likely explanation is that it is originally derived from the B.1 variant via an undetected intermediary variant. The B.1 variant contains both the D614G mutation in the spike protein and the P323L mutation in NSP12. We also note there is a nucleotide substitution in the 5’ untranslated region at the start of the genome in B.1 variants which is involved in the regulation of RNA transcription and the mutation provides important protection from degradation by its own activity.  Other mutations in this region deserve more attention.

The origin of a new variant of interest from Cameroon points to the need for continued global surveillance in Africa, which, up until now, has been notably absent with the exception of South Africa. Given what is happening in other parts of the world, such as India and Brazil, this is a continent we should be paying close attention to for emerging variants. In recent weeks, another variant was identified out of Tanzania in an Angolan airport, which carries a similar wealth of dangerous mutations from an entirely separate lineage. As the virus continues to spread around the world, new variants will only continue to appear,  which will be a challenge for detection, mitigation, therapeutic treatment and prevention, and vaccines.