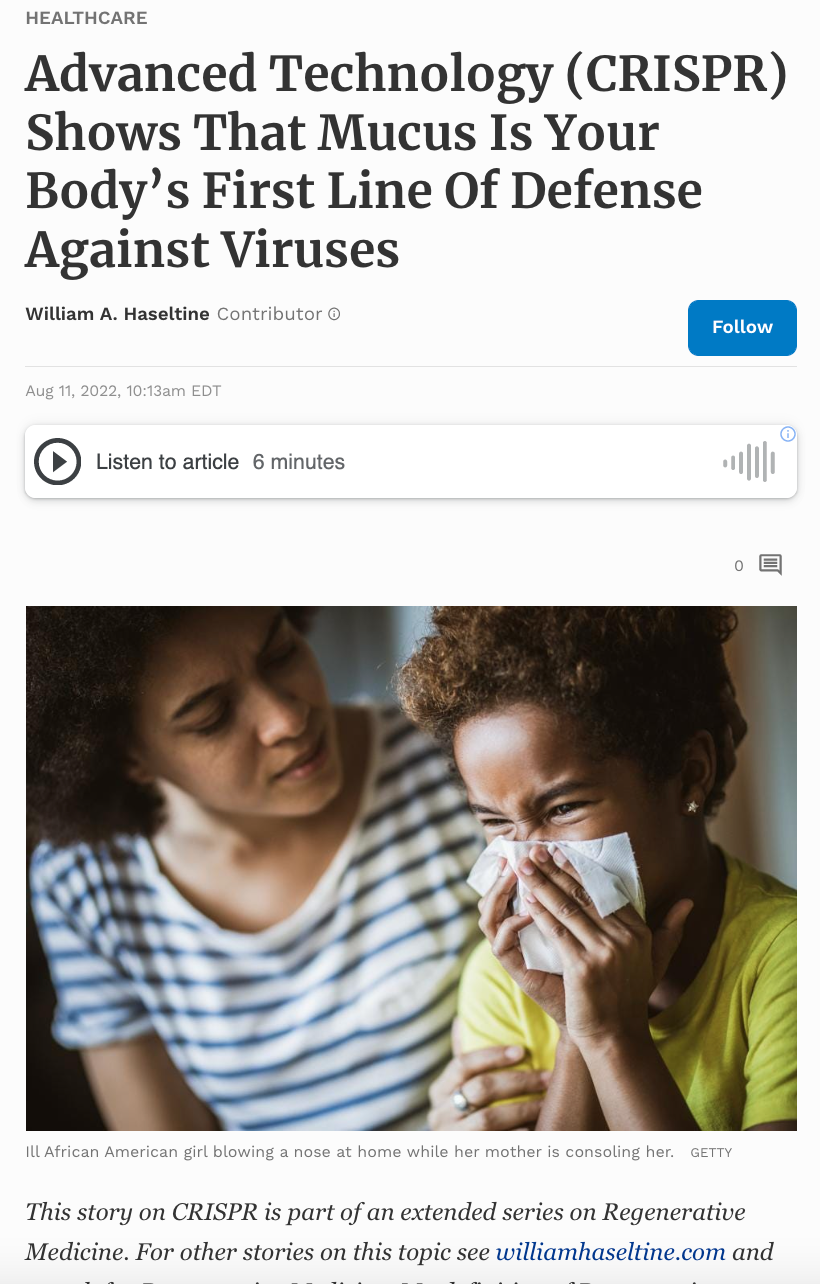 This story on CRISPR is part of an extended series on Regenerative Medicine. For other stories on this topic see williamhaseltine.com and search for Regenerative Medicine. My definition of Regenerative Medicine is any medical modality that returns us to normal health when we are damaged by disease, injured by trauma, disadvantaged by birth, or worn by time. Modalities include: chemicals, genes, proteins and cells used as drugs, gene editing, prosthetics, and mind-machine interfaces.

One of the key mysteries of SARS-CoV-2 is why it seems to infect some people more seriously than others. While vaccines have provided much-needed protection against the virus, there is still a need to develop better drugs to treat those who do become infected.

A primary method to develop drugs that fight viral infection is to determine what a virus needs to replicate in the body. Up until now, most studies have focused solely on SARS-CoV-2 and its own methods of attack. However, infections require cooperation between the human body’s cells along with the virus. In fact, viruses rely on many cellular structures within the host cells to replicate.

So how can we decode SARS-CoV-2 and its interactions with our own bodies? One way to do this is to conduct a systematic study of all the genes in cells that are known to interact with SARS-CoV-2. By inhibiting the majority of genes while leaving some active, scientists can pinpoint exactly which genes and cellular structures affect SARS-CoV-2 infections.

Fortunately, with a new gene-editing tool called CRISPR, researchers at U.C. Berkeley were able to do just that. After conducting a study of genes found in lung cells, Biering et al. discovered a naturally occurring protein in the body that may have the ability to inhibit SARS-CoV-2 infections. This study is the first to examine how SARS-CoV-2 interacts with human lung cells, marking a critical advancement in SARS-CoV-2 research.

How does CRISPR work? CRISPR technology is a recent advancement in gene-editing. The technology consists of two components: Cas9, which is an enzyme that cuts DNA, along with a short RNA segment that guides Cas9. When the guide RNA locates its complementary sequence in DNA, it binds to the targeted gene and acts as a signal to the Cas9 enzyme. Once Cas9 locates and binds to the guide RNA, the enzyme can then cut the entire DNA sequence at that specific location. This allows scientists to knockout genes entirely or edit the genome by inserting new genes.

After studying the effects of each gene found in the lung epithelial cells, Biering et al. discovered several genes that seemed to impact SARS-CoV-2 infections. These included known genes such as those responsible for the ACE2 receptors, but also some new players. One of the most influential categories of genes was a group responsible for producing proteins called mucins.

Mucins are the most abundant protein found in mucus and can either be secreted to form gels that span the surface of the lungs or can exist within epithelial cell membranes. Interestingly, Biering et al. found that only mucins within the cell membrane seemed to have a direct effect on SARS-CoV-2 severity.

But how did the mucins defend against SARS-CoV-2? Since only membrane-bound mucins affected SARS-CoV-2 infections, Biering et al. hypothesized that membrane-bound mucins somehow block the virus from entering the cell membrane. Surprisingly, after using microscopic imaging techniques to examine the interactions between SARS-CoV-2 and mucins, researchers found that the cells with overexpressed mucins did indeed inhibit viral entry.

More research must be done to determine whether the interactions between mucins and SARS-CoV-2 are consistent in humans. However, the results of this study are promising and could lead to new, effective treatments that have the potential to decrease the severity of SARS-CoV-2 infections.