An Ancient Form Of Immunity Protects Many Against Covid-19 Today 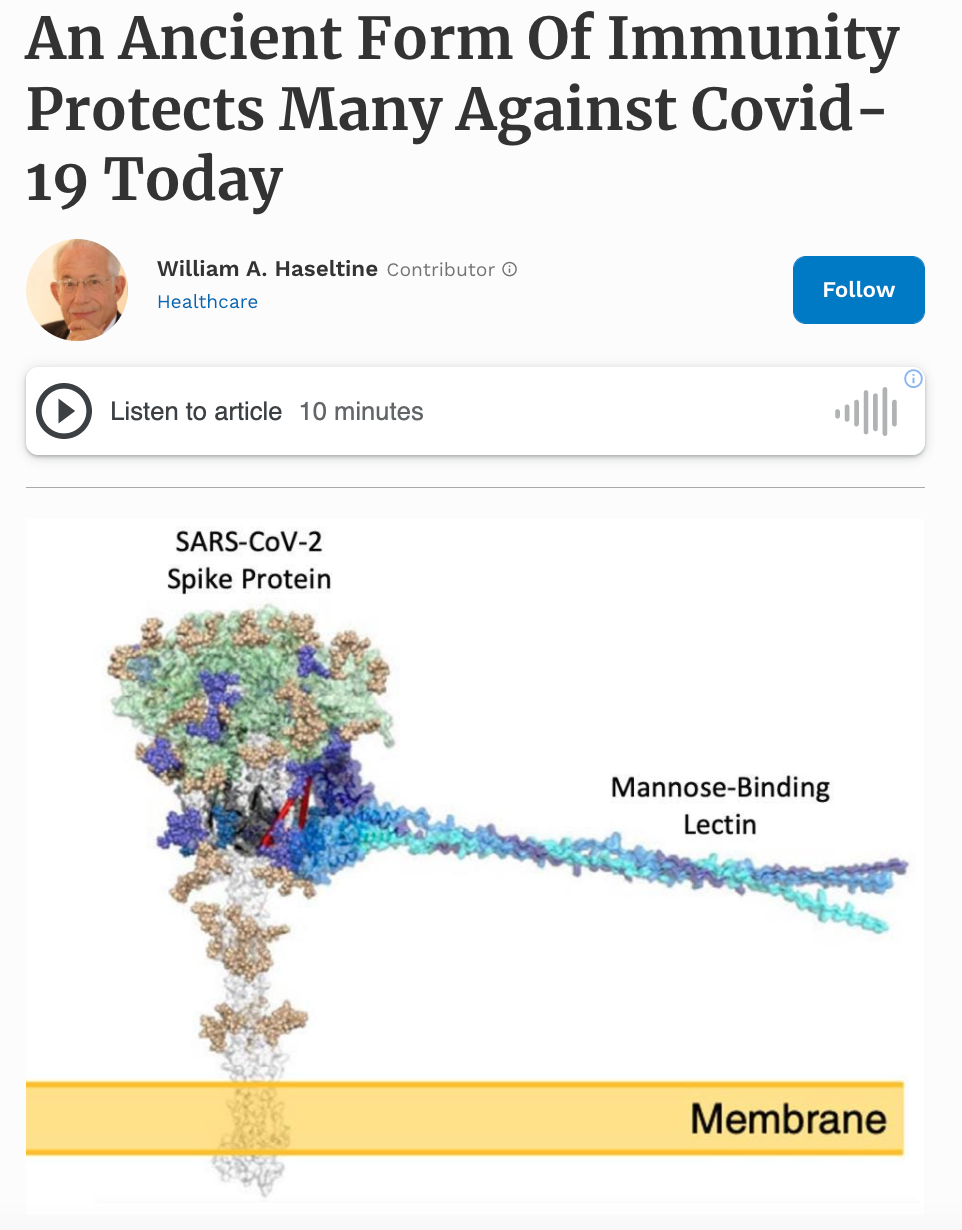 One of the most striking features of the SARS-CoV-2 pandemic is that across all variants, most people who are infected have few if any, serious symptoms. The majority experience mild cold-like symptoms, while the most serious symptoms are confined to only about 10% of those infected. These numbers are even better for those who are vaccinated. What accounts for the fact that unvaccinated people seem to be mostly resistant to a virus that has the potential to kill?

The answer lies in our innate immune response.

This series of articles is an extension of a previous series which is now available as an anthology in the book, Natural Immunity and Covid-19: What it is and How it Could Save Your Life. Here, we extend that series based on new research about yet another aspect of the natural (innate) immune system.

The fundamental feature of the innate immune system is that it protects our body from microbes, viruses, bacteria, and parasites that we have not previously encountered. Much of the attention and public awareness of human immunity is focused on adaptive or learned immunity. Learned immunity is developed in our bodies after exposure to prior infection or vaccinations. Only in recent years has there been tremendous progress on what may be our most important defense system of all: innate immunity.

This story focuses on an unheralded aspect of innate immunity and describes a category of proteins called lectins. Lectins are believed to have evolved prior to antibodies and continue to persist in our immune system today. It has now been discovered that these lectins may provide two aspects of protection by preventing infection and by limiting the ability of SARS-CoV-2 to replicate and spread.

Lectins occur ubiquitously across nature and are considered pattern-recognition molecules. This is because lectins have a special ability to recognize foreign molecules in the body and can activate a response to those molecules. The lectin system has many components including mannose-binding lectin, collectins, and three different ficolins, all of whom are pattern recognition molecules that can recognize different molecules and activate different responses. Now, at least two proteins from the lectin family have been implicated in our body’s defense against SARS-CoV-2: mannose-binding lectin and its related enzyme, MASP-2.

How does mannose-binding lectin recognize foreign molecules in the body? Most invading microorganisms, cells, and viruses contain a surface coated with complex glycan structures or “sugar” molecules. These structures help the microorganism move, aid in aggregation, and can serve as a shield to conceal the microbe from a host’s antibodies.  SARS-CoV-2 is no exception to this. One of the salient features of the SARS-CoV-2 virus is its spike (S) protein. Much like other microbial proteins, the spike protein is covered with its own unique glycan residues (Figure 2).

Mannose-binding lectin contains multiple receptors that are used to identify the glycan residues of invading microorganisms. It also contains a stem that activates a defense mechanism called the lectin complement system (Figure 3). Mannose-binding lectin and the lectin complement pathway evolved well before antibodies and are often considered to be proto-antibodies. They are known to play a crucial role in defending our body against viruses and bacteria like HIV, salmonella, and streptococci.

The Lectin Complement Cascade and the Role of MASP-2

When mannose-binding lectin recognizes an invading pathogen, it initiates the lectin complement cascade by activating MASP-2 and its counterpart, MASP-1. When MASP-2 and MASP-1 are activated, they cleave two other proteins: C2 and C4. The C2 and C4 protein fragments then bind together to form C3 and C5. C3 and C5 can directly kill pathogens by binding together to form holes in the pathogen membrane (lysis). The cleavage of C2 and C4 also releases inflammatory cytokines which alert other immune cells to aid in the attack of the pathogen (Figure 4).

MASP-2 is a crucial enzyme within the lectin pathway. Only MASP-2 can cleave both C4 and C2. When MASP-2 is inhibited in the body, the lectin pathway can no longer be activated and cannot defend the body against invading pathogens.

Previous studies have found that activation of the lectin complement system was associated with the development of respiratory distress and failure during viral pneumonia—a prominent symptom of severe SARS-CoV-2 infections. In addition, autopsies of patients who were infected with SARS-CoV-2 have shown evidence of lectin complement activation through the presence of C5, C3, C4, and MASP-2 proteins.

The question is, are mannose-binding lectin and MASP-2 the proteins responsible for defending our bodies against SARS-CoV-2 through the lectin complement system?

In the first paper, Stravalaci et al. began by determining if any lectins could bind to SARS-CoV-2. By testing the interactions between specific proteins found in SARS-CoV-2 and each lectin, researchers found that of the lectins tested, only mannose-binding lectin consistently bound to the SARS-CoV-2 spike protein.

Stravalaci et al. found that mannose-binding lectin could bind to SARS-CoV-2 through its spike protein. However, in a second related story published in Frontiers Immunology, researchers found that lectins may actually have two modes of attack against SARS-CoV-2.