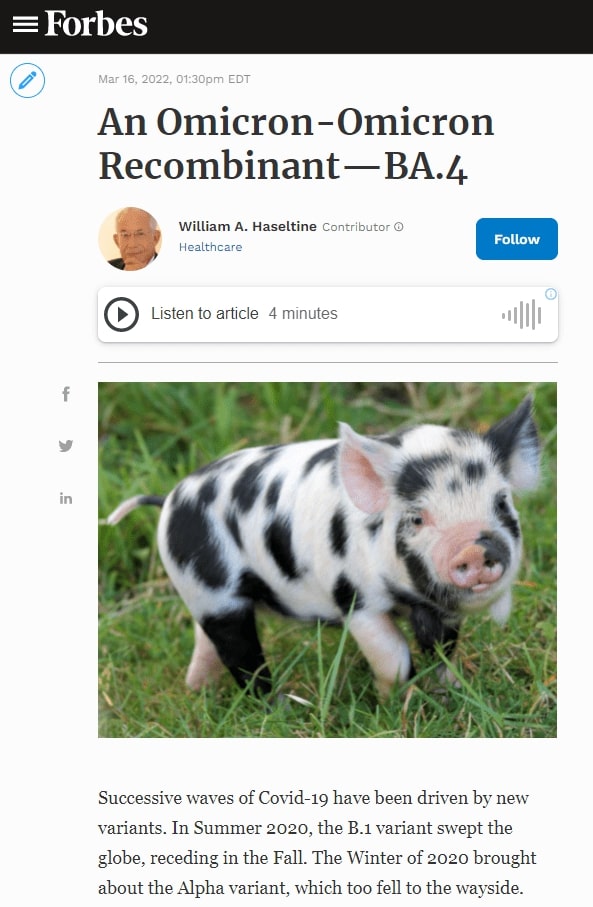 Successive waves of Covid-19 have been driven by new variants. In Summer 2020, the B.1 variant swept the globe, receding in the Fall. The Winter of 2020 brought about the Alpha variant, which too fell to the wayside. Then the Delta variant fueled another wave, first in India and then around the globe, again receding in the Fall. Most recently, the BA.1 strain of Omicron fueled the largest spike to date, peaking in late January. A new wave, driven by yet another variant, BA.2, that shares a common undetected parent with BA.1 is triggering yet another wave of infections in Europe (Figure 1) and has established a firm beachhead in the United States.

All the variants of concern to date appear to arise by mutations from an earlier parent. Mutations include single nucleic acid substitutions as well as small deletions and insertions. That by no means exhausts the repertoire of coronavirus genomic variation. Betacoronaviruses such as the SARS-CoV-2 genome can undergo internal sequences rearrangements and recombination, the exchange of one part of the genome for that of a closely-related virus. Two such recombinants have been described recently, an Omicron-Omicron recombination and a Delta-Omicron recombinant.  Here we describe the Omicron-Omicron recombinant, given the preliminary designation Omicron BA.4.

As of yet, appearances of BA.4 around the world are very few. There have been four confirmed sequences of the strain in South Africa, one in the US, and one in Puerto Rico through March 16th. This is the number of sequences in the GISAID database. The real number of infections by this recombinant could be much higher, especially as Omicron BA.1 and BA.2 continue to rage.

The simplest interpretation of the origin of BA.4 is a recombination event between BA.1 and BA.3. It is likely that BA.3 contributes the portion of the genome extending from the 5’ end halfway through the NSP3 gene of the replication complex (about 2,000 amino acids). The remainder is plausibly contributed by BA.1. The anomaly is a single mutation in NSP6 found in BA.1, but not BA.3 or BA.4. This could also be coincidental, as many SARS-CoV-2 viruses are mutated in NSP6 from 105-108, though we cannot be certain.

We note two mutations are unique to BA.4  These include the mutations in NSP15 (N11S) and in the N-terminal domain of the Spike protein (L212I). We propose these two mutations arose in BA.4 post-recombination.

Recombination events amongst closely-related coronaviruses are expected. For example, scientists from the Pasteur Institute suggest that a bat virus isolated in Laos closely resembling SARS-CoV-2 is the product of recombination amongst at least fifteen other bat coronaviruses. Recombination requires that a single host be infected simultaneously by two different viruses. Co-infection of Omicron BA.1 and BA.2 has been reported by researchers in Denmark. While rare, the researchers identified 47 instances of rapid reinfection of BA.2 shortly after BA.1, indicating that a recombination event could occur in such hosts.

The recent reports are likely to be only the beginning of the next chapter of SARS-CoV-2 in which a swath of variant recombinants emerge. At present, it is too early to predict whether the recombinants will have novel biological properties including increased transmissibility, immune evasion, and pathogenesis.