Antibodies Team Up Against Omicron 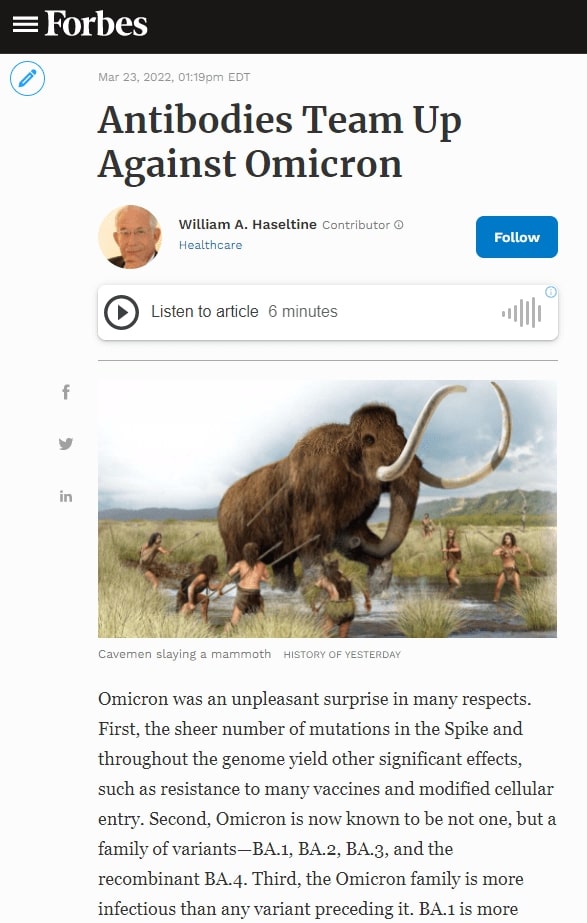 Omicron was an unpleasant surprise in many respects. First, the sheer number of mutations in the Spike and throughout the genome yield other significant effects, such as resistance to many vaccines and modified cellular entry. Second, Omicron is now known to be not one, but a family of variants—BA.1, BA.2, BA.3, and the recombinant BA.4. Third, the Omicron family is more infectious than any variant preceding it. BA.1 is more infectious than Delta and BA.2 is more infectious than BA.1.

Here we address another unpleasant surprise of Omicron. The family of variants, in addition to being highly resistant to many vaccines, is also resistant to currently available monoclonal antibodies, which are often the first line of defense for treating people infected, but not yet seriously ill, in hospital settings. Antibodies developed to treat infections resulting from the original Wuhan virus or initial B.1 variant have reduced effectiveness against Omicron.

Evushield and bebtelovimab are two examples of antibodies with reduced Omicron neutralization. Both antibody treatments target binding sites that are altered in the Omicron receptor-binding domain. Among Evushield’s targeted residues, S477, T478, E484, and Q493 are all altered in BA.1, BA.1.1, and BA.2. Bebtelovimab’s binding map is also altered at positions N440, G446, Q498, and N501.

Thankfully, there are a few antibodies that may still have significant neutralization of the Omicron family. These may become the next great tools in the fight against severe Covid-19. Here we describe a study by Fenwick et al. that describes these antibody candidates and how they are capable of neutralizing BA.1, BA.2, and all their subvariants.

Screening for the presence of anti-Spike antibodies in over 100 samples of sera donors, Fenwick et al. identified two monoclonal antibody candidates that showed promising results against previous variants of concern, including Alpha, Beta, Gamma, and Delta. They compared these two antibodies against currently available monoclonal treatments, such as the AstraZeneca combination cocktail, Regeneron cocktail, and sotrovimab.

The two antibodies, P2G3 and P5C3, strongly neutralized not only the Wuhan strain of SARS-CoV-2, but also Alpha, Beta, Gamma, Delta, and, most notably, BA.1, BA.1.1, and BA.2 remarkably effectively. P2G3 was between 5 and 907-fold more potent at neutralizing the Omicron family Spike proteins as compared to other monoclonal therapies. P5C3 was slightly less potent than P2G3, but still more neutralizing than the other tested therapies.

Notably, Fenwick et al. identified upon cryo-electron microscopy that P5C3 bound the virus noncompetitively with P2G3, meaning they could be combined in a single treatment. This combination performed roughly the same as P2G3 on its own, though we note that a combination would be more difficult for the virus to mutate to overcome.

The two are non-competitive because they attach to the Spike receptor-binding domain at different angles. The authors believe that P5C3 takes a common approach as previous monoclonal antibodies, latching to the up-configuration of the receptor-binding domain. P2G3 attacks at an unusual angle, targeting the side of the protein rather than the top, meaning the antibody can bind in the up or down-configurations. Together, the antibodies effectively lock the Spike protein in place, limiting its transmission.

Throughout the pandemic, variants have mutated to evade our latest defenses against severe illness. Just as Omicron mutated a number of Spike and genome-wide mutations leading to reduced effectiveness of vaccines and monoclonal treatments, future variants may mutate to overcome P2G3 and P5C3. When administered together, we are essentially delaying that process by giving the virus more targets to mutate against.

Recent studies of the sotrovimab antibody indicate that resistance to the treatment when used as a monotherapy rises rapidly in treated patients. Particularly in those that are immunosuppressed, Rockett et al. note that over time, infected hosts with persisting infections may develop mutant viruses that reduce sotrovimab neutralization as much as 300-fold.

We suggest avoiding the monotherapy approach of antibodies altogether. There are a number of monoclonal antibodies that attach to relatively conserved sites across SARS-CoV-2 variants. Among these are Vir/GSK’s S2K146 antibody, which uses a wide footprint to overcome heavily mutated sites like N501 and E484. Another is the CV3-1 monoclonal antibody that binds the 485-GFN-487 loop in the receptor-binding domain, which is a highly conserved site in Omicron and other variants.

Now that there are many antibodies available, and more coming soon, we should be combining at least three or more of the described antibodies in one treatment, making the task of overcoming neutralization that much more difficult for the virus. One of the included antibodies should definitely be CV3-25, as it differs from most circulating antibody candidates to date. Ultimately, SARS-CoV-2 will continue to mutate and overcome our tools for the months and perhaps years to come. During such time, we must continue to innovate and develop strategies to fight back against severe illness, and combination monoclonal therapies are one such avenue.