As Protection From Current Covid-19 Monoclonal Antibody Treatments Fades, The Discovery Of A New Class Of Antibodies Brings Hope 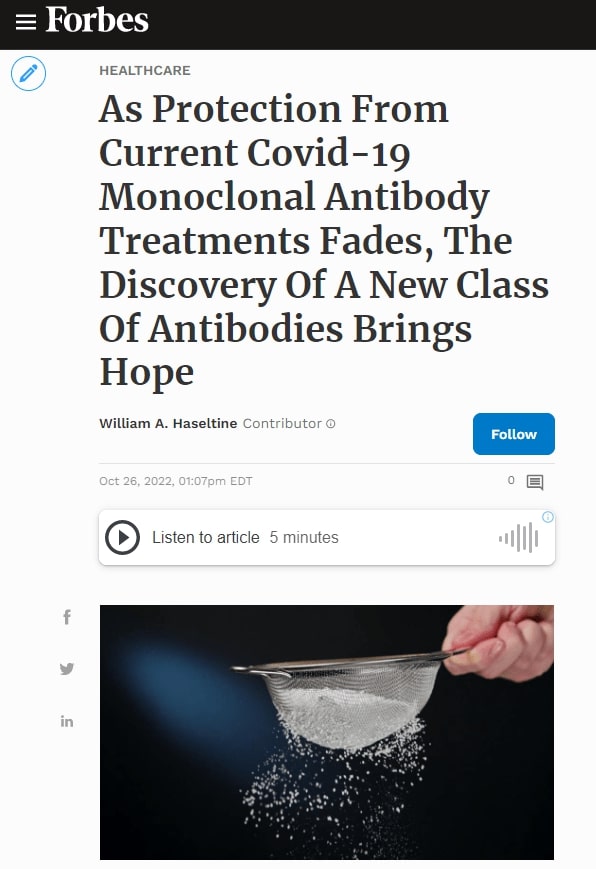 The latest Omicron subvariants are evolving to become more immune evasive, rendering monoclonal antibody treatments such as Evusheld and the forthcoming bebtelovimab ineffective against new strains. With surges predicted in the winter and few mitigation measures left in place, over 17,000 immunocompromised Americans and older populations in nursing homes who rely on these treatments could be left vulnerable to severe disease and high mortality rates. As reported in STAT news, Biden administration officials are “racing to game out other antibody options [to protect these populations].”

However, there is hope in the discovery of at least two new classes of antibodies, which appear to be impervious to new virus mutations. They could provide a long-term solution to the issue of SARS-CoV-2 drug resistance fueled by evolving variants.

Unlike previous waves driven by a single ominous variant, current and future waves will be driven by multiple subvariants of Omicron. Each new subvariant accumulates mutations in similar parts of the receptor binding domain, a critical spot in the spike protein where virus-blocking antibodies dock, continuing to enhance the virus’s immune dodging capabilities.

The most concerning of the emerging immune-evading variants are BQ.1.1 and XBB. The two variants currently represent under 5% of cases in the United States and worldwide, but that figure is likely to rise. In addition to the various mutations established in their ancestral strains, BQ.1.1 and XBB carry several new mutations in the spike protein that enable their further evasion of approved monoclonal antibodies, including, but not limited to V213G/E, G339D/H, and F486V/S.

All previously approved monoclonal antibodies work by binding the receptor-binding domain at positions mutated in these new strains, suggesting that they will lose most, if not all, neutralization against new subvariants.

However, two new groups of monoclonal antibodies in development may circumvent these and future Omicron variants by binding at alternative conserved sites to the receptor-binding domain that rarely mutate.

The first set is antibodies that bind the fusion peptide and surrounding region. Two examples are COV44-62/79 by Dacon et al., and VN01H1/C77G12 by Low et al. These two antibodies have binding epitopes between positions 812 and 824. As with most variants throughout the pandemic, BQ.1.1 and XBB lack mutations in this range, meaning the antibodies likely maintain neutralization capabilities despite the highly mutated spike protein.

Not only could these antibodies neutralize all SARS-CoV-2 variants, but other related coronaviruses such as MERS and SARS-CoV-1. Figure 4 below shows the conservation of amino acids between different coronaviruses in these regions.

These antibodies are not approved, nor have they been approved for human trial, but ongoing experiments in mice and hamsters show great promise in their Omicron neutralization. Most significantly, COV44-62/79 demonstrated substantial neutralization even against BA.5.

Using combinations of antibodies could also further protect against SARS-CoV-2 drug resistance. We can create an insurance policy against future mutated variants by pairing conserved targets.

Another issue is that the strength of binding of non-receptor-binding domain antibodies is lower than those that bind the receptor-binding domain. The binding strength can be boosted through modification of the variable end of the antibody. They can be further optimized by increasing half-life by up to three months or improving cell toxicity by modifying the stem portion of the antibody known as the Fc receptor. All such techniques are well-established and reasonable methods to be explored.

Here we have discussed the use of monoclonal antibody drugs for the prevention and pre and post-exposure and treatment of Covid-19. The alternative approach, which has been successful for HIV, is the use of small-molecule drugs to prevent and treat AIDS and other HIV-related complications. Currently, more than 30 drugs are approved for the prevention and treatment of HIV infection, some of which provide durable protection between two and six months with a single injection. It is clear that while we continue to pursue the development of broadly active monoclonal antibodies, we should accelerate our programs to discover and deploy highly effective, long-acting small molecule drugs targeted to Covid-19.