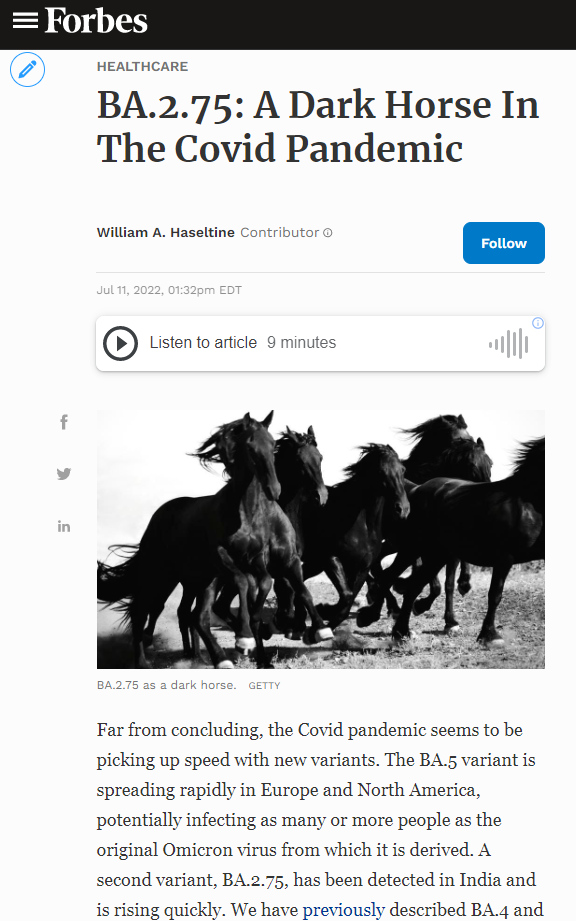 Far from concluding, the Covid pandemic seems to be picking up speed with new variants. The BA.5 variant is spreading rapidly in Europe and North America, potentially infecting as many or more people as the original Omicron virus from which it is derived. A second variant, BA.2.75, has been detected in India and is rising quickly. We have previously described BA.4 and BA.5; here, we focus on the novel BA.2.75.

Omicron BA.1 variant emerged in late 2021 with substantial genetic and virological differences.  BA.1 was quickly followed by the genetically distinct descendant BA.2. Figure one denotes the initial rise of BA.1, quickly followed by BA.2. These represented the bulk of cases during the winter months of early 2022 when confirmed cases in the United States peaked at around 1 million per day. BA.4 and BA.5, which are very similar, derive from BA.2, as does BA.2.75, although independently. There is no relation between Omicron BA.1 and the other major variants, Alpha, Beta, Gamma, Delta, etc. BA.4/BA.5 is the dominating strain of Covid-19 today, and we believe BA.2.75 may join them.

Later Omicron variants, such as the currently dominating BA.4 and BA.5 strains, appear capable of reinfection of those previously infected with an earlier strain. Those infected with BA.1 were susceptible to BA.2, and so on. One report indicates that BA.5 was between 14.3 and 16.8-fold more resistant to Evusheld and Sotrovimab antibody treatments than previous variants. This resistance, in addition to new mutations, is likely related to sensitivity to a membrane protease, TMPRSS2, that is associated with cell membrane infectivity. BA.5 has a greater sensitivity to TMPRSS2 inhibitor Nafamostat, meaning that BA.5 is slightly less infectious relative to BA.1 and BA.2, but could be more virulent and immune evasive, akin to the Delta variant of 2021.

The latest in the line of Omicron variants is BA.2.75, which has a distinct set of Spike mutations in addition to those found in BA.2, BA.4, BA.5, and other mutations outside the Spike protein, indicating it was independently derived from BA.2.

BA.2.75 is still very new. It was recently discovered in India, followed by ten countries soon after. The World Health Organization has already warned about BA.2.75 and continues to monitor the variant as it spreads to more regions of the globe. While confirmed cases due to BA.2.75 are relatively low, numbers are expected to increase in the coming weeks.

The Spike is the most heavily mutated protein in the Omicron family of variants. This pattern holds with BA.2.75. There are 36 mutated amino acids in the BA.2.75 Spike protein. Some early variants, such as Alpha, did not even carry 36 amino acid mutations in the entirety of their genome. BA.2.75 has this amount in the Spike protein, which accounts for roughly 10% of the SARS-CoV-2 genome.

The unique mutations of the BA.2.75 Spike protein are isolated to the N-terminal and receptor-binding domains. These are regularly the most heavily mutated regions of the virus as they are typical targets for neutralizing antibodies derived from infection, vaccines, and monoclonal treatments, meaning mutations may allow the virus to overcome neutralization. These regions also play a significant role in the virus’s transmissibility, speaking to how later variants grow more infectious.

The new additions fall into two categories: new mutations and reversions. We only find one reversion in BA.2.75, which is Q493. In BA.2, this position was mutated from glutamine to an arginine (Q493R), a common mutation in circulating variants throughout the pandemic. Reversions are uncommon, as a mutation often confers some virological advantage over the original amino acid. However, this reversion may interact complimentarily with a new unique mutation to confer a more significant advantage than Q493R could have on its own.

To have such unique mutations at this stage of the pandemic when the virus has mutated into hundreds, even thousands of competing strains is astounding. These mutations likely have health officials on high alert, as a wealth of new mutations could indicate increased transmissibility or immune evasion if the variant catches fire like its predecessor.

The new lineage also has five new additions outside of the Spike protein. Four lie in the Orf1ab replication-transcription complex, and the last lies in the Envelope protein.

Two of the unique mutations, S403L and P822S, lie in NSP3. This protein is involved in the formation of the structure of the double-membrane vesicle replication compartment. It also inhibits interferon activity by direct cleavage of IRF3 and antagonizing MDA5 activation. These mutations could therefore be involved in virus replication and immune evasion activities.

We additionally note N118S in NSP8, G671S in NSP12, and T11A in the Envelope protein. NSP12 is the RNA polymerase that drives viral replication and transcription, while NSP8 is a structural cofactor for that machinery. The Envelope is involved in viral assembly, budding, and viral porin activity. More research is needed on these unique mutations to determine their exact advantages, but they are likely involved in these processes. You can read more about the functions of each protein in our book Natural Immunity.

There may be several mutations that do not change amino acids in the coding sequence, known as synonymous mutations, but we do not have access to those at this time.

Even as we write this article, the Omicron family is ever-evolving. In addition to BA.2.75, recent reports from India suggest that there are accompanying lineages BA.2.74 and BA.2.76 that are circulating concurrently with BA.2.75. As of yet, the exact sequences are unavailable to view on the GISAID SARS-CoV-2 database, though the researchers suggest they share the same Spike protein, implying that differences lie outside the Spike just as BA.2.75 differs from earlier variants.

To summarize, having just recovered from the first Omicron wave of BA.1 and BA.2 at the start of the year, as well as the BA.2.12.1 wave in the United States and elsewhere, the world is now facing two additional variants, which may individually or collectively surpass the first wave in magnitude. In the United Kingdom epidemic alone, infections jumped several hundred thousand in previous weeks due to the new strains. Were the US to face similar increases, daily rates could be in the millions, exceeding the peak of the Omicron wave in mid-January. The impact of BA.5 and BA.2.75 on health outcomes, hospitalization, and death remains to be seen. All countries but China have abandoned public mitigation measures, meaning Covid safety now falls on the individual, which is a sorry state of affairs in the face of the continued onslaught of SARS-CoV-2.