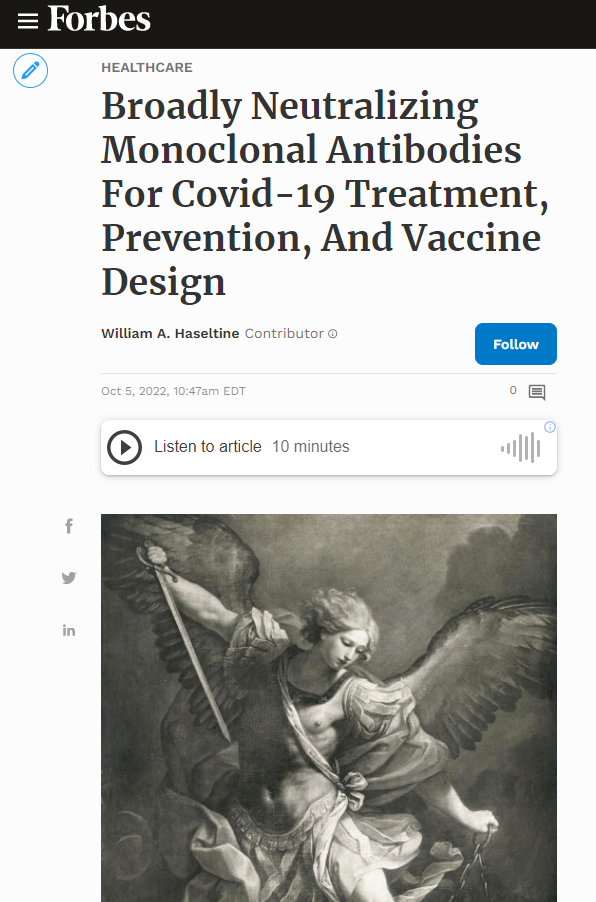 Recent progress on monoclonal antibodies raises the possibility that the means to prevent and treat SARS-CoV-2 infections may soon be at hand. The hope arises from discoveries of antibodies that have the potential to neutralize all known SARS-CoV-2 variants and other related coronaviruses, including SARS-1 and MERS. A strategy for Covid control is possible using combinations of these antibodies for the treatment and pre-and post-exposure prophylaxis. Such treatments may eventually be combined with highly active antiviral drugs to end the pandemic.

There is an acute need for drugs to treat and prevent SARS-CoV-2 infection regardless of variants. Current vaccines dramatically reduce hospitalization and death from multiple variants. However, protection from infection and transmission diminishes with time and as the virus mutates. Recurrent viral variants are common despite multiple vaccine boosts and prior infection. The infection of hundreds of millions of people dramatically increases the risk that even more transmissible and virulent variants may arise, not to mention the ever-increasing burden of Long Covid. The possibility of increased virulence is real. Recall that SARS-1 and MERS kill 10% and 30% of those infected, respectively. The recently discovered broadly neutralizing monoclonal antibodies provide near-term hope effective for variant-independent prevention and treatment as we await the discovery of highly active antiviral drugs.

The Spike is an intertwined trimer of three S proteins. Each of the three is composed of two subunits: S1, the membrane distal region, including the receptor-binding and N-terminal domains, and S2, the membrane-proximal protein. The receptor-binding domain atop S1 can assume two configurations: up, capable of binding the ACE 2 receptor, or down, non-binding (Figure 1).

The original monoclonal antibodies approved for clinical use were met with great success, potentially neutralizing the virus both singularly or in combination. Unfortunately, the utility of these antibodies waned quickly. The virus has mutated significantly over the last two and a half years, leading to evasion of the immune response to infection. These mutations also abrogate neutralization by many of the FDA-approved monoclonal antibodies. This seems to be a never-ending game of catch-up. First, the virus changes, then new antibodies are created to recognize the new variants. Next, variants mutate to evade natural and monoclonal antibody immunity. This endless cycle resulted in the rapid deterioration of antibody potency against themes’ recent variants (Table 1). Note that even the most broadly neutralizing antibody available today, bebtelovimab, has reduced activity against the BA.2.75 variant currently circulating in Asia and Europe.

Discovery of a Set of Broadly Neutralizing Antibodies

To circumvent this cycle, researchers worldwide sought and found monoclonal antibodies that recognize highly conserved regions of the virus to neutralize most, if not all, variants. Some also neutralize SARS-1, MERS, and related Bat betacoronaviruses, and some even neutralize human betacoronaviruses that use the ACE2 protein as the receptor (Table 2). These antibodies have multiple origins, from convalescent and vaccinated volunteers to mice, alpacas, and macaques.

Despite differing binding sites on the Spike protein, the broadly neutralizing antibodies share one common property. Most amino acid contacts between the antibody and the spike are highly conserved, not only amongst all SARS-CoV-2 variants but also with the closely-related human and bat coronaviruses. Specifically, mutations in the amino acid binding sites are exceedingly rare in the over 12 million sequences deposited in international databanks. These amino acids likely perform a critical function. For example, the monoclonal antibody COV44-62/79 targets highly conserved the fusion peptide. The 35B5 antibody binds a crucial region that serves as a hinge for the up-down configuration father receptor binding domain. Wang et al. report that binding to the region dissociates the trimer. The Camelid antibodies lock the receptor binding domain in the down, inactive configuration. The Li antibody binds the very highly conserved linear epitope in the S2 region near the virus membrane Table 3 details seven antibodies’ amino acid binding sites.

At the time of writing, there is another preliminary antibody candidate by Cao et al., SA55+SA58, which shows strong Omicron neutralization. This set binds the receptor-binding domain in a similar configuration to the Fenwick antibodies P2G3/P5C3. We will do additional in-depth analysis of this new set at a later time.

We have reached out to the researchers behind each antibody to discern their current status. While none of those described here are clinically approved or are currently undergoing human trials, many of the authors indicated that after further preliminary data collection, they anticipate clinical trials in the coming months.

The protean nature of SARS-CoV-2 to sustain viable mutations in the Spike protein merits caution. A strategy of combining three of the broadly neutralizing antibodies rewires an escape variant that alters three highly conserved bindings sites simultaneously, an unlikely possibility. Examples of sets of such antibodies are shown in figure 3.

We note there are a number of mutations common to binding sites in bebtelovimab. Specifically, key residues such as N440, Q498, and N501 are commonly mutated in the latest Omicron family variants. In the future, more mutations in these residues may occur in emerging variants, potentially rendering bebtelovimab less effective.

Furthermore, cryptic sewershed variants described by Marc Johnson and colleagues display similar mutations throughout the receptor-binding domain. Were these variants to gain traction, bebtelovimab’s neutralization capacity would likely be severely hampered due to mutations in key binding sites.

For treatment, monoclonal antibodies must be used in the first five or six days of infection, as the virus concentration decreases sharply in most people after five days.

Post-exposure prophylaxis is the prevention of infection and disease in people known to be exposed to the virus. The duration of such treatment with antiviral drugs and monoclonal antibodies should be no longer than ten days, the maximum incubation period for signs and symptoms of Covid-19.

The third use, pre-exposure prophylaxis, is the use of long-acting monoclonal antibodies and highly-active antiviral drugs for those under conditions of high risk of infection. This may include people living in close quarters, for example, military bases, ships, sea cruisers, schools and hospitals, and nursing homes. High-risk situations may also pertain to entire communities where the infection rate exceeds five percent of the local population.

One caveat is that each of the broadly neutralizing antibodies described (and there will be more) was developed by different independent labs and may be licensed to diverse biotechnology and pharmaceutical companies. Development of the ideal antibody cocktails may require that the pharmaceutical industry and the NIH work in tandem. Solutions to such issues have been successfully addressed to develop effective combination therapies for cancer and HIV using the global National Institutes of Health office network.

A second caveat is potency. Some of the antibodies are active in the IC50 in the low nanogram range. Others are significantly less potent. All the antibodies described here may require additional engineering for potency, extended half-life, and antibody-dependent cellular cytotoxicity and phagocytosis—all possible with extant technology.