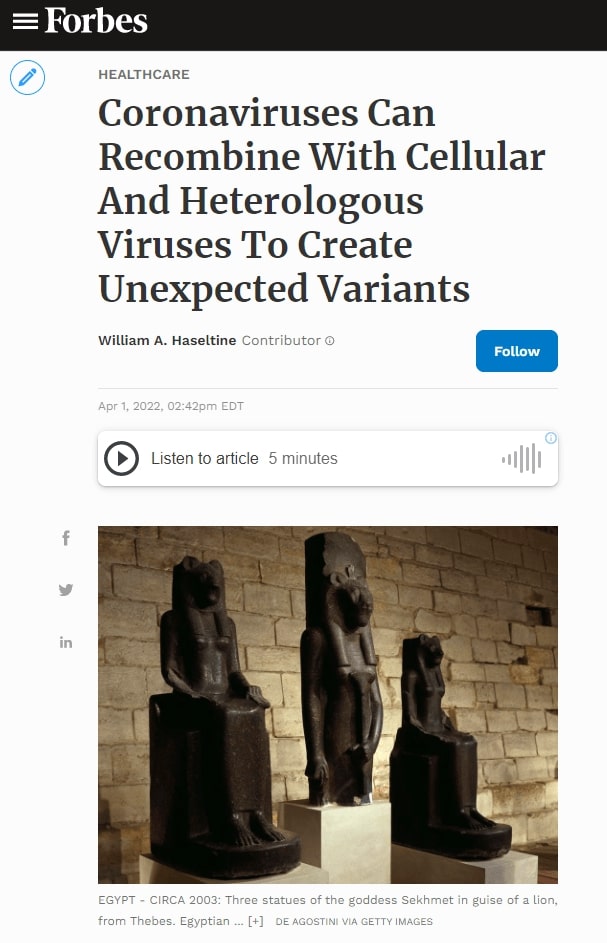 Recent concerns that recombinants may arise amongst SARS-CoV-2 viruses are now a reality. Recombinants have been identified between Delta and Omicron and between variants of Omicron itself, namely BA.1 and BA.3. The following question arises: may other SARS-CoV-2 variants arise that incorporate genes from homologous or heterologous viruses or even cellular genes, and might such viruses have novel properties that increase the transmission, immune evasion, or virulence?

To examine whether or not such a scenario is plausible for SARS-CoV-2, we reviewed the recent literature. We came across a 2016 study by the laboratory of George Gao (Huang et al.) that describes just such an event, recombination between a bat betacoronavirus and a gene from a bat orthoreovirus. As part of a systematic study of bat betacoronavirus in the southern province of Yunnan, the team determined the full-length sequence of several independent bat isolates.  One such sequence differed from all others by the inclusion of a novel sequence between the genes encoding the nucleocapsid protein and the accessory NS7a gene (Figure 2).

Origin Of The Heterologous Sequence

A search of gene databases revealed a match for the anomalous insertion, the P10 gene of a bat orthoreovirus. An analysis of the P10 TRS sequences indicates that they complement the TRS sequences of the N and NS7a proteins, resulting in their configuration between the two (Figure 3).

The orthoreovirus P10 protein belongs to a family of fusion-associated small transmembrane proteins called FAST protein. The amino terminus of these proteins is typically myristoylated, followed by a hydrophobic extracellular domain. The proteins all have a single transmembrane domain followed by a polybasic, positively-charged, intracellular domain (Figure 5). The FAST proteins drive cell-to-cell fusion, also known as syncytia formation.

Huang et al. compared the ability of the bat coronavirus-derived P10 protein to initiate cell to cell fusion with the P10 protein isolated in an authentic orthoreovirus (Palau). They cloned both into expression vectors. Both are active FAST proteins capable of triggering cell-to-cell fusion (Figure 6).

Unfortunately, Huang et al. could not isolate replication-competent virus from the pat with the bat P10 insertion. They were, however, able to detect the find the P10 protein shed into the bat feces by immuno-assay.

The original work left unanswered whether or not the heterologous recombinant is viable. Our colleague Roberto Patarca searched the coronavirus database and revealed 13 additional identical independent isolates from bats between 2010 and 2016 in China (three isolates), Singapore (one isolate), and Cambodia (nine isolates), indicating the viability and transmission of this recombinant. We note that including a FAST protein within a coronavirus genome may confer a selective advantage. Syncytial forming viruses may spread from cell to cell within a host, avoiding recognition by antiviral antibodies.

Others have noted the ability of coronaviruses to undergo non-homologous recombination with other viruses, including toroviruses, influenza C/D, reoviruses, rotaviruses, and astroviruses. As is the case with the bat betacoronavirus described here, these all arise in the 3’ region of the virus that encodes the structural and accessory proteins. Similar heterologous events have been identified for toroviruses that, like coronaviruses, are members of the nidovirus family, which share this continuous synthesis of their messenger RNA.

Previous works show that nidoviruses, including betacoronaviruses, can recombine with other viruses, and host cells’ genes coproduce viable offspring. Although these events are maybe rare, such recombinants exist. Several billion people and innumerable animals have been infected by-y SARS-CoV-2. The appearance of such a variant with new and unexpected properties should not come as a surprise. Instead, we should increase genomic surveillance and immediately characterize such a SARS-CoV-2 variant should it arise.