Emerging news from Brazil on Covid-19 reinfection is a potential warning for all of us on the danger SARS-CoV-2 variants pose, both to those who have already been infected and, very likely, to those who have been vaccinated. This new data on the antibody-resistant Brazilian variant (P.1) can begin to shed light on a number of questions people may have. Can you get reinfected if you had a past infection and if you are reinfected, will you get sick?

Lead researchers on the Brazilian strain, including Dr. Nuno Faria of the Imperial College of London, first released their discovery and analysis of the variant on January 12th, 2021. The sample arose in Brazil in December 2020 but rocketed to 87% of samples by early January and over 99% of samples by February.

For such a drastic acceleration of variant integration, there must have been reinfections. As it turns out, it may have been the driving force. Dr. Faria noted the likelihood that most of the cases observed in P.1’s spread the past few months were reinfections. This likelihood is derived from antibody effectiveness six times weaker against P.1 in comparison to previous SARS-CoV-2 strains.

Another study found that when the P.1 spike protein is implanted in another virus, antibodies neutralized it at lower levels than the wild-type virus, but not quite as low as the full P.1 pseudotype. This means that mutation to other parts of the genome, specifically ORF1ab, ORF3a, ORF8, and the nucleocapsid protein, likely have a hand in immune evasion as well.

Using data from Manaus and other areas of Brazil, Faria estimates that P.1 was between 1.4 and 2.2 times more transmissible than previous SARS-CoV-2 strains and that between 25 and 61% of previously infected patients were susceptible to P.1 reinfection.

Natural infections do not seem to protect against reinfection, yet vaccines remain to be seen. While Faria found that antibodies derived from the CoronaVac vaccine in Brazil were less effective at stopping the P.1 variant, little data is yet available on reinfections after vaccine administration. We know that antibodies fade over time and data suggests that you lose tremendous antibody potency six to eight months after natural infections. It is possible that vaccine protection wanes six months to a year after administration, but that data will not be available for many months.

In brief, the notion that antibodies are completely protective is tainted. P.1 prompts reduced protection against natural antibodies and could potentially do the same for vaccines down the road. This strain presents a dangerous potential for spread even after mass vaccination. Reinfection en masse is a significant possibility. The figure below shows the decline of immunity for the Brazilian variant in red, as opposed to the wild-type or UK variant. 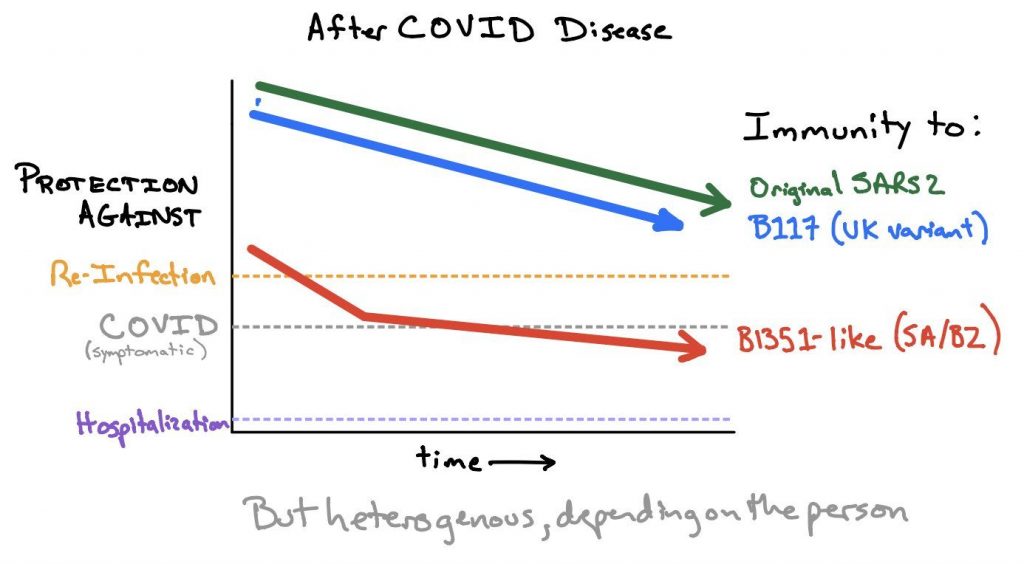 While rare as of yet, reinfection cases seem to have more intense symptoms on average. A recent report from the Centers for Disease Control and Prevention (CDC) details reinfection in a Kentucky elderly facility. In the summer of 2020, this nursing home reported 25 positive cases of Covid-19. Several months later, from October to December, the same facility reported over 100 cases, with five testing positive for the second time. While only three of the five experienced moderate to severe symptoms of the first infection, all five did the second time around. One reinfected resident was hospitalized and succumbed to their illness.

All five residents tested negative for the virus at least four times between infections, confirming reinfection and not simply a prolonged infection. The study notes the possibility that mild or asymptomatic cases of Covid-19 during the first infection may indicate a less than sufficient immune response to prevent reinfection. If this is the case, and second infections are more severe, then many millions of previously asymptomatic Covid-19 cases face the danger of aggressive reinfection.

We also have examples of reinfection from other parts of the world, namely South Africa. During the Novavax vaccine trials in South Africa, the study found an overall primary efficacy of 49.4% in 4,400 participants, meaning about half of the patients vaccinated and later infected did not experience symptoms. Genomic analyses revealed that about a third of the 4,400 were previously positive for infection, meaning the South African variant was then and is now capable of reinfection, evading neutralizing antibodies in a similar capacity to the Brazilian variant.

I emphatically agree with all those who encourage everyone to be vaccinated as soon as possible. The current generation of vaccines will protect you, at the very least, in the short run. How long that protection may last, we cannot say. We hope when data becomes available, indications point to protection for at least a year from the wild-type and emerging variants of the virus. Until we have answers to these long-term questions, we must remain hopeful, but cautious.