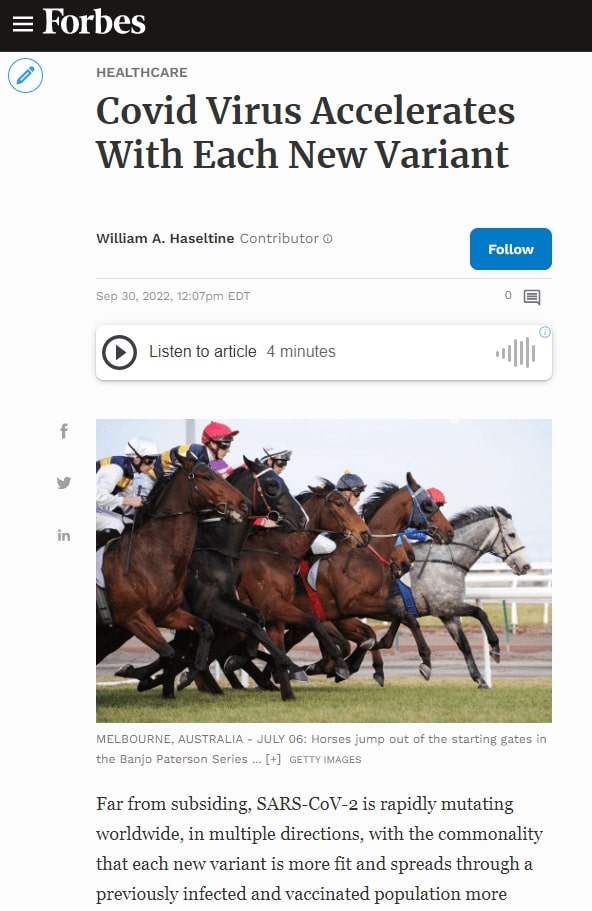 Far from subsiding, SARS-CoV-2 is rapidly mutating worldwide, in multiple directions, with the commonality that each new variant is more fit and spreads through a previously infected and vaccinated population more rapidly.

Since late 2021, the Omicron variant has dominated SARS-CoV-2 infections, fueling the massive wave of cases in January and onward. From the parental Omicron BA.2 lineage came BA.5, which currently accounts for most infections. Though while BA.5 was headlining SARS-CoV-2 infections, a cacophony of sibling variants was mutating and emerging behind the scenes, leading to a massive pool of variants being identified around the globe.

One of the most disturbing attributes of these later variants is increased growth rates as compared to earlier lineages. For instance, four Omicron sublineages, BA.2.75, BA.2.75.2, BQ.1, and BA.2.3.20, have a growth rate advantage of between three and 15 percent per day as compared to the predominant BA.5 lineage BA.5.2. For context, BA.5 is regarded as having a significant growth rate advantage over BA.2, which is the variant largely responsible for the most infectious period during the pandemic.

These variants, as compared to BA.5, contain a few variable mutations in the spike protein that may account for increased viral fitness. The table below compares the additions and reversions in each strain as compared to their shared parent BA.2.

Increased viral fitness via advantaged growth rate can yield a slew of Covid-19 implications. For instance, one of the reasons the Omicron variant created so many new infections, over 800,000 confirmed cases per day in the United States at its peak and likely millions more, is because the variant was capable of infecting those with previous infections and those who had been previously vaccinated.

The mRNA vaccines widely available in the United States never effectively prevented infections, to begin with, as they were more tailored to prevent moderate and severe disease outcomes if an infection occurs. This trend continued with the Omicron variants, but infections were far more common. Those fully vaccinated and boosted were much more likely to be shielded from severe disease and death, but not so much infection.

Emerging variants, such as the four described as more fit, can reinfect those previously infected with an earlier Omicron variant. Confirmed Covid cases have been on the decline in the United States for the past couple of months, though this may be attributed to fewer testing centers and reduced data reporting.

The winter months throughout the pandemic have been a breeding ground for the virus as populations move indoors more often as temperatures drop and indoor winter holidays are celebrated.

While infections are unlikely to be averted this winter as Covid regulations are at their most relaxed since before the pandemic began, individuals can take measures to protect themselves to the greatest extent possible. Most notably, one can now receive an updated booster vaccination targeted toward the Omicron variant. While extensive testing and data on the viability of these vaccines to prevent infection are unavailable, it is very likely that the additional dose of the vaccine will strongly increase protection against severe disease and death.

While many, including the President, suggest that the pandemic is concluding, those who regularly check the numbers would disagree. Be sure you and your loved ones are vaccinated as possible this upcoming winter as these new variants begin to rear their ugly heads.