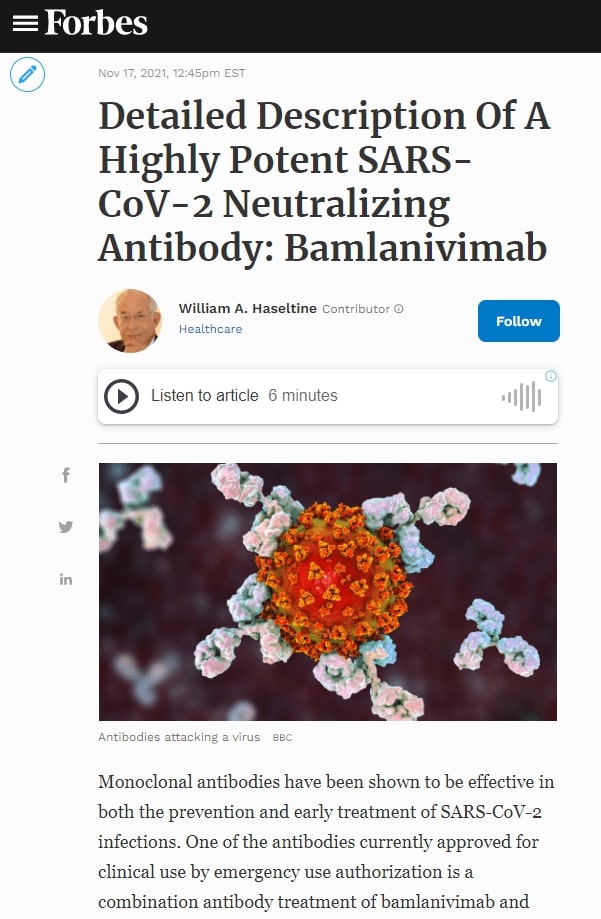 Monoclonal antibodies have been shown to be effective in both the prevention and early treatment of SARS-CoV-2 infections. One of the antibodies currently approved for clinical use by emergency use authorization is a combination antibody treatment of bamlanivimab and etesevimab. A recent paper by Jones et al. describes bamlanivimab and its properties in detail, as well as details how bamlanivimab was discovered, providing a potential blueprint for antibody discovery in the future.

Monoclonal antibodies are typically laboratory-produced molecules that mimic the adaptive immune system’s response to invading pathogens. They neutralize a virus by blocking the Spike (S) protein from attaching to the host ACE2 receptor, which reduces viral reproduction and immune reactions.

From these 440 candidates, Jones et al. selected antibodies capable of rapid cloning, recombinant expression, and were observed in high frequency, of which there were 175. They further selected for more specific requirements, including SARS-CoV-2 and SARS-CoV-1 binding, binding to the S protein receptor-binding domain, and binding to certain receptor-binding domain mutations commonly found in SARS-CoV-2 variants, including V378F and V483A. This led to a lead panel of antibodies for further testing.

Jones et al. tested the neutralizing capacity of the panel antibodies against a SARS-CoV-2 pseudovirus and a live SARS-CoV-2 isolate. In both instances, one antibody, bamlanivimab, was by far the most potent neutralizing antibody, with a half-maximal concentration of about 0.05 micrograms per milliliter neutralizing at roughly 75%.

To investigate the increased neutralization, Jones et al. performed x-ray crystallography on bamlanivimab and found that in addition to binding the receptor-binding domain, it also was found to bind to an epitope overlapping ACE2 binding sites.

FIGURE 2: Bamlanivimab blocks ACE2 and binds to the spike protein RBD in up and down conformations.

The researchers then conclude that this allows bamlanivimab to bind the receptor-binding domain in both the “up” and “down” configurations, whereas the other antibodies, including etesevimab, only bind in the “up” configuration.

To test for protection by bamlanivimab against Covid-19 related symptoms, Jones et al. used nonhuman primates as a simulation of how the antibody may be accepted by the human immune system. Testing for RNA copies per milliliter in bronchoalveolar lavage fluid, lung tissue, nasal swabs, and throat swabs, the researchers noticed distinct drops in RNA content across the board within days of monoclonal antibody inoculation.

In other words, in all areas of the respiratory tract, the monoclonal antibody bamlanivimab reduces SARS-CoV-2 replication and viral load, which in theory results in weakening and waning of symptoms sooner in the infection cycle. This is great news for general and at-risk populations alike. If you were to come in contact with a known SARS-CoV-2 infection or were early on in the symptom onset, taking bamlanivimab could greatly reduce the risk for at-least respiratory-related illness.

The combination therapy, now produced by Eli Lilly, is now approved by the Food and Drug Administration via emergency use authorization for post-exposure prophylaxis and treatment. In addition to immediate treatment, the antibody can be used in immunocompetent infected patients up to five to seven days post-infection and it remains effective. Additionally, the antibody is successful in preventing infection and disease in those known to be exposed to SARS-CoV-2 infected hosts.

However, we note that as SARS-CoV-2 continues to evolve into new and more mutated variants, the virus can and will become more resistant to treatments like bamlanivimab + etesevimab. For example, a recent study of three SARS-CoV-2 variants all originating in Africa indicates some resistance already occurs. The Beta variant from South Africa is completely resistant to the combination cocktail. Additionally, the Eta variant from Nigeria and the A.30 variant from Tanzania are substantially resistant to the cocktail in comparison to the Triad variant which drove infections in the Summer of 2020. In other words, these variants already contain mutations that render major approved monoclonal antibodies less effective or completely ineffective.

Despite this, we implore more such wide studies to be undertaken as hidden gems like bamlanivimab await discovery. More treatments and prophylactics of this nature could greatly reduce the risk for hospitalization and death, especially among at-risk individuals. Using bamlanivimab’s discovery as a blueprint may lead to numerous more to be discovered in the critical months ahead.