Difficulties Of Single Monoclonal Antibody Treatment Of SARS-CoV-2: The Sotrovimab Experience In Australia 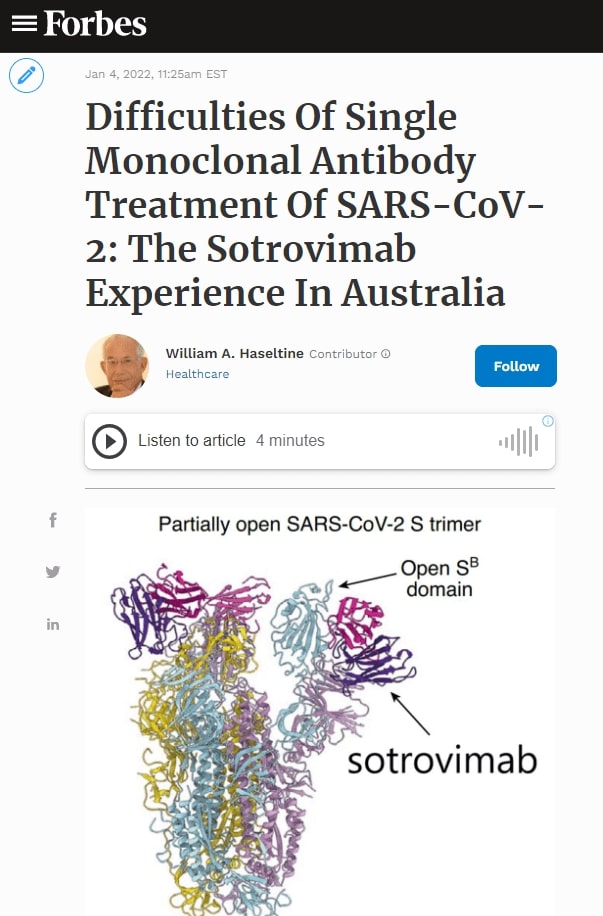 The SARS-CoV-2 Omicron variant has spread around the globe at unprecedented speed. Neither prior infection nor multiple vaccinations impede transmission. One hope was that early treatment with monoclonal antibodies for those most susceptible to serious disease would reduce hospitalization and death. Unfortunately, Omicron has proved to be resistant to most FDA-approved monoclonal antibody treatments. Laboratory experiments suggested that at least one monoclonal antibody, sotrovimab retained significant activity. Unfortunately, recent data from Australia raises serious issues of sotrovimab as a stand-alone treatment. Rockett et al. demonstrate that resistance to sotrovimab as a monotherapy rises rapidly in treated patients. Moreover, they worry that such viable variants may also be highly resistant to existing vaccines.

Rockett et al. determined the sequence of virus isolated from patients treated with sotrovimab. A patient cohort of 100 received sotrovimab at a treatment center in New South Wales, Australia. The treatment was a single 500mg dose targeted at patients within five days of symptom onset thought to be at risk for severe disease progression. Of the initial 100 patients, 23 tested positive for SARS-CoV-2 infection at least 10 days post-infusion, and of these, the pre- and post-infusion respiratory tract samples of eight were collected. Of these eight, seven were hospitalized, six were partially vaccinated or unvaccinated, and four were given additional antibody treatment (Table 1).

Viable virus samples obtained from four of the patients contained a mutation at amino acid E340 of the spike protein, either E340K, E340A, or E340V (Table 1). The virus in one patient contained an additional mutation: the P337L mutation.

These mutations are predicted to yield virus resistance to sotrovimab. Analyses of mutations in this region of the Spike, the receptor-binding domain, indicate that the observed mutations decrease sotrovimab neutralization by almost 300 fold.

Sotrovimab, like many other SARS-CoV-2 monoclonal antibodies in development, targets highly conserved regions of the Spike protein. This strategy is an attempt to create pan-variant neutralizing treatments. Residues 337 and 340 are both among the most highly conserved epitopes in the SARS-CoV-2 Spike protein. Each is only found mutated in a few hundred of the millions of sequences in the GISAID sequence database.

Rockett et al. note that in addition to monoclonal antibody resistance, similar resistance may be found in vaccine-elicited neutralizing antibodies. The experimental evidence showing sotrovimab treatment induces dangerous mutations suggests we should conduct similar experiments with current generations of vaccines as the subject.

Mutant viruses that persist for ten days or more may transmit further antibody and vaccine-resistant infections.

Effective therapy will require the use of two or more monoclonal antibodies each targeting different epitopes.

The rapid appearance of antibody resistance should come as no surprise for those who follow the literature on the use of convalescent sera to treat persistently infected patients. Variants resistant to the neutralizing activity of such polyclonal sera develop in a matter of days to weeks. Some speculate that Omicron arose from such a patient.

The data of Rockett et al. also serve as a warning for the use of monotherapy low molecular weight antiviral drugs such as paxlovid and molnupiravir. Laboratory. Experiments demonstrate that resistance to these drugs does arise. We should not be surprised if such resistance develops rapidly.

We conclude by noting that molnupiravir may create even more vaccine and monoclonal antibody drug-resistant variants than sotrovimab. The drug is a polymerase inhibitor that induces a destructive number of mutations to the virus. The possibility of molnupiravir introducing new mutations to the virus, without neutralizing the virus, seems a significant risk. In vivo human trials akin to the one examined here could shed light on this dangerous possibility.