Emergence Of IgG4 In Long Term Vaccines: Winning Or Losing The Race? 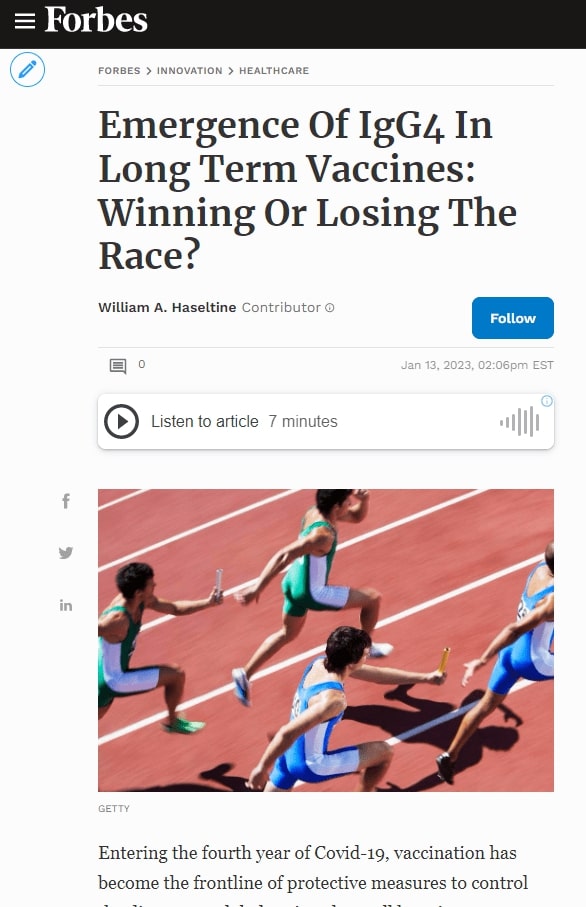 Entering the fourth year of Covid-19, vaccination has become the frontline of protective measures to control the disease, as global nations have all but given up on mass mitigation strategies such as masks and regular testing.

The initial vaccines released in 2021, both adenovirus and mRNA versions, displayed a remarkable efficacy in preventing infection and symptoms peaking at roughly 90%.

Two years later, our enthusiasm for the Covid vaccines has been chastened for two reasons. Firstly, the protection against infection for the version of Covid-19 the vaccines were designed for has waned heavily, and many people were subject to reinfection only months later. Secondly, virus variations occurred much more rapidly than most anticipated, resulting in little to no protection against later strains such as the current XBB.1.5.

Vaccines do protect against hospitalization and death, though to varying degrees. Those under 65 are much less likely to be hospitalized due to Covid-19 if they are fully vaccinated and boosted with an additional bivalent dose, however, those over 65, and especially those over 80, are far less protected.

For this reason, it is important to understand exactly what these vaccines may be doing. Here we summarize the results of a study on the nature of antibodies produced after multiple rounds of vaccination. The study by Irrgang et al. describes how repeated exposure to vaccines produces a rare form of antibody, IgG4, which has some unique properties.

There are five types of antibodies: IgG, IgM, IgA, IgD, and IgE. Each antibody performs a different function and is characterized by a different heavy chain. The study by Irrgang and colleagues focuses on IgG, which is among the most stable and critical to neutralizing functions.

Within IgG, there are four subclasses: IgG1, IgG2, IgG3, and IgG4. The two most apparent distinctions between the subclasses of IgG antibodies are their structural properties and their activation of complement effector functions. In terms of structure, IgG antibodies all have a distinct ‘Y’ shape, with a constant Fc region at the stalk and a variable Fab region at the arms, with a hinge combining them. Regarding structural differences, the subclasses share a nearly identical Fc region, but the hinge region varies considerably.

The constant regions are derived for all four of these subclasses are derived from combinations of germline inherited DNA sequences, which are serially constructed. The rarest among these are IgG4 antibodies.

All four antibody subclasses may bind to the same epitope, but they differ in the consequence of that binding. The Fc portion (the trunk of the ‘Y’ shape) determines how the body reacts to an antigen once it is bound to the antibody. These reactions are effector functions, and each subclass activates effector functions to varying degrees.

The three main functions are 1) the activation of inflammation; (2) the opsonization (labeling) of pathogens and cells for clearance/destruction; (3) the direct killing of target cells/microbes by lysis.

IgG1, IgG2, and IgG3 provide protection not only by blocking the virus from entering cells but also by their Fc regions activating effector functions and signaling the immune system to kill infected cells. IgG4, however, does not activate the effector functions, meaning their presence may impact how the body responds to Covid-19.

To measure the relative frequency of IgG subclasses in the sera of vaccine recipients, Irrgang et al. followed a cohort of 29 healthcare workers, analyzing their sera ten days after a first, second, and third dose, as well as 210 days after the second, and 180 days after the third.

In line with initial efficacy reports for the vaccine, antibody levels were robust throughout the cohort post-first and second doses. The researchers also found that 210 days after the second dose, antibody levels had fallen significantly, reaffirming the loss of antibody protection over time. Again, following the third dose, antibodies rose significantly, only to fall 180 days after the booster.

The most interesting data regards the growing concentration of IgG4 in the cohort’s sera. On average, only 0.04% of the antibody response post-second vaccination was IgG4. 210 days after the second dose, that percentage rose to 4.82%. Following the third dose, IgG4 comprised 13.91%, rising to 19.27% 180 days after.

Why is this happening? IgG4 antibodies have distinct characteristics. They are highly matured, highly variable, and have a high affinity for the receptor for the target. Therefore, they should be exceedingly effective at stopping the virus via neutralization activity and ACE2 direct blocking. Because it is not triggering the complement effector functions, IgG4’s sole and primary activity is blocking and neutralizing the virus.

What This Could Mean

The exact impacts of an increased frequency of IgG4 are unclear a could be argued either way as a positive or negative. IgG4 occurrence correlates with increased avidity but decreased antibody effector function. Avidity measures the overall or accumulated strength of a protein-protein complex, which may serve as a marker for increased virus neutralization. However, IgG4’s decreased effector functions could signal less robust neutralization and clearance of virus and infected cells.

The addition of IgG4 may explain the increased ability of sera from multiply vaccinated or infected patients to recognize a broader range of strains because it binds more tightly. While it lacks the effector functions, that may not be as serious a disadvantage as one may think. More than 80% of antibodies in analyzed sera were still IgG1, IgG2, and IgG3, meaning effector functions are still activated, creating a healthy mix. However, it remains to be seen how IgG4 concentrations impact disease outcomes such as hospitalization and death.

We echo the closing thoughts of the researchers, noting that these results should be further examined to understand the exact impacts of IgG4 concentration in antibody titers. Not only could this information impact the future of Covid-19 vaccination, but of mRNA vaccine technology in general.