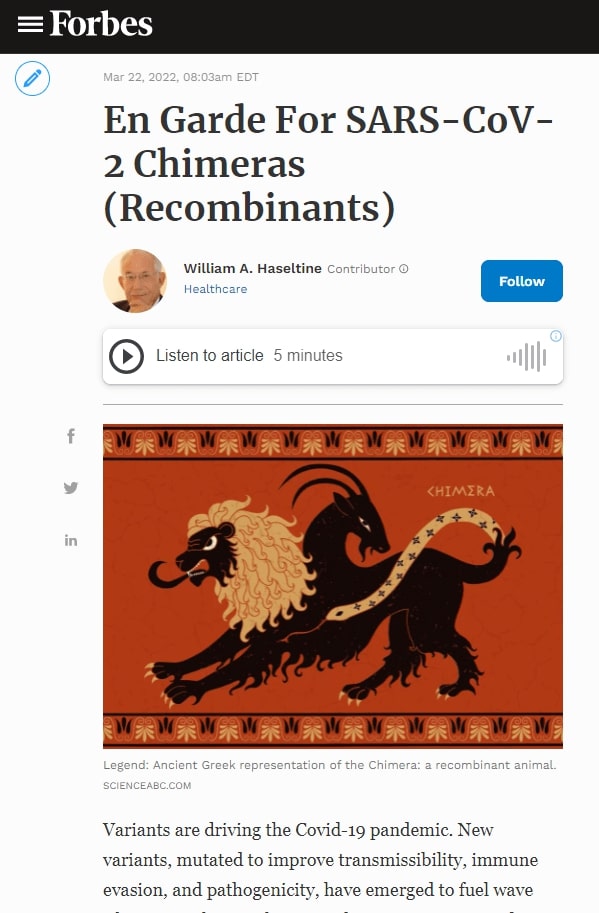 Variants are driving the Covid-19 pandemic. New variants, mutated to improve transmissibility, immune evasion, and pathogenicity, have emerged to fuel wave after wave of new infections. These new strains, to date, have almost exclusively mutated via point mutations, small deletions, or insertions.

There is a new class of SARS-CoV-2 that the scientific community has long contended may soon become a problem. These are SARS-CoV-2 recombinants. Recombinants are the result of exchanging one part of a virus for another. Recombination is possible with SARS-CoV-2 if a host cell is infected with two different variants at the same time. For SARS-CoV-2, this may occur when one variant displaces another over time, such as the current displacement of BA.1 by BA.2 or the recent overtaking of Delta by Omicron.

The New York Times reports 463 million confirmed global Covid cases since the pandemic’s start. This number is likely much higher, perhaps in the billions, with asymptomatic and unreported cases. Millions of cases extrapolated into dozens of significant strains throughout the past two years yield the ideal breeding ground for new recombinant strains.

Our previous story on recombinant strains discussed the emergence of an Omicron-Omicron recombinant strain identified in South Africa. This strain combined portions of BA.1 and BA.3, sibling variants in the Omicron family, to create a new variant provisionally named BA.4.

Here we discuss recent reports of recombinants between Delta and Omicron, almost certainly occurring when both viruses were in circulation in late 2021. The wave of late Spring and Summer 2021 was driven by the Delta variant, which did not cause the same rapid acceleration of cases as Omicron, but was moderately more severe in terms of symptoms.

The figure below demonstrates some of the confirmed instances of the Delta-Omicron recombinant, dubbed Deltacron. The figure notes six confirmed sequences of Deltacron, all slightly different. We note that many more Deltacron cases may exist at the time of writing and certainly in the coming weeks. For example, the study by Colson et al. that identified the French Deltacron has since identified the same sequence in as many as 43 cases; 33 samples in France, eight in Denmark, one in Germany, and one in The Netherlands.

Coronaviruses are particularly prone to recombination as template switching, that is polymerase jumping from one strand to another, is required for messenger RNA synthesis. Although most of these jumps occur at sequences called transcription regulatory sequences (TRS), other sites have also been documented as template switching sequences, albeit at a lower frequency. The SARS-CoV-2 replication transcription machinery may also switch templates at transcription pause sites when they encounter stable secondary structures.

Roberto Patarca (personal communication) identified one such stable secondary structure at the recombination junction of recombinant “GM” pictured in Figure 3 projected to be extremely stable and, therefore, a site for polymerization pausing. It is predicted to have -89kcal stability, where a greater negative value is associated with higher stability.

Although these recombinants have been identified, their significance remains to be determined. To date, none of these seem to show a propensity for displacing current variants. The concern comes chiefly from the fact that recombination of existing SARS-CoV-2 viruses actually occurs and they are not so rare as to remain undetected. New recombinants that arise may be able to enhance the three critical virological variables: transmissibility, immune evasion, and virulence.

Recombinants may also appear not only by coinfection in humans, but infection in the large reservoir of animal populations SARS-CoV-2 is capable of infecting, namely housepets, mice, deer, and others.

We also note detection of highly mutated reverse zoonosis variants in New York City sewers containing nearly sixty amino acid changes, posing another risk of recombination. There is a chance that SARS-CoV-2 could coinfect an animal with another coronavirus, resulting in a recombinant that makes its way back to humans. This is of particular concern as some animal viruses have an extensive set of mutations in the Spike protein and larger genome, for example, deer viruses in Ontario were found with 76 nucleotide mutations throughout the virus.

These are the early days in our detection and understanding of recombinants in some was similar to the discovery of the first variant from Wuhan, B.1, in which three mutations granted a strong infectivity advantage. It now seems possible that these examples render the possibility concrete that new variants can arise via recombination, which will make a significant difference to transmission, immune evasion, and disease. Watch with space.