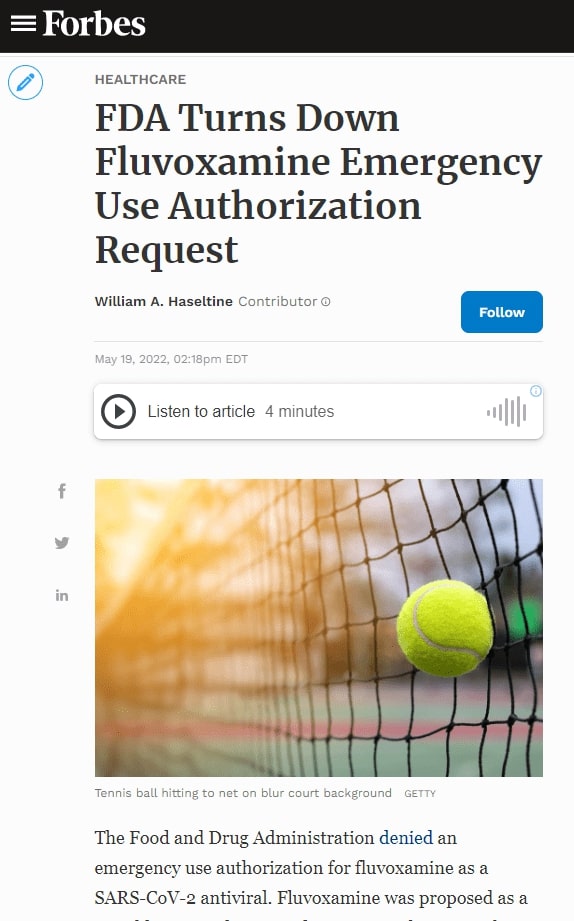 The Food and Drug Administration denied an emergency use authorization for fluvoxamine as a SARS-CoV-2 antiviral. Fluvoxamine was proposed as a possible antiviral in 2021 due to its mechanisms of action for treating obsessive-compulsive disorder. These same mechanisms were suspected to inhibit SARS-CoV-2, leading to four trials testing the efficacy of the drug.

In December 2021, Dr. David R Boulware requested an emergency use authorization for the outpatient treatment of adults testing positive for SARS-CoV-2 to prevent progression to severe symptoms based on early efficacy data from the fluvoxamine trials. The Food and Drug Administration denied his request, listing concerns such as insufficient data. Here we will discuss the FDA’s decision and reasoning.

The FDA’s main concern was the lack of conclusive evidence from four trials that were below emergency use authorization standards. The largest of the four trials, the TOGETHER trial, was a randomized, double-blind, placebo-controlled trial of high-risk patients in Brazil. The primary endpoints of the trial were (1) emergency room visits lasting greater than six hours and (2) hospitalization due to progression of Covid-19.

The FDA found that the success of the trial was fueled by the six-hour threshold, which they found to be arbitrary. A patient remaining in the emergency room for 5.9 hours after taking fluvoxamine was considered a positive data point, whereas 6.1 hours was considered a negative. In the FDA’s words, “there are uncertainties about…whether the 6-hour timepoint represents a clinically meaningful threshold.”

The other three trials were found to be inconclusive as well. The FDA noted that the STOP COVID trial had several damaging design flaws, including a lack of randomization, a small sample size, and only a single testing center. The STOP COVID 2 trial and the COVID-OUT trial both failed to demonstrate a positive efficacy for fluvoxamine and were terminated early for futility.

While the TOGETHER trial did achieve a positive efficacy based on its trial design, the FDA ultimately concluded that the four trials failed to provide sufficient data to conclude that fluvoxamine may be an effective treatment for nonhospitalized Covid-19 patients.

Among fluvoxamine’s mechanisms of action, which we discussed in a previous article, are binding to sigma-1 receptors on immune cells, reduced expression of inflammatory genes in human endothelial cells, and mediation of lysosomotropic properties. These factors were theorized to reduce the immune impacts following SARS-CoV-2 infection, including cytokine storms, hyperinflation, and coagulation.

While some in-vitro data supported the claim that fluvoxamine’s mechanisms of action could work against SARS-CoV-2, no in vivo animal or human studies have been conducted to confirm this hypothesis. The FDA notes that the lacking evidence and lack of detailed characterization for fluvoxamine in a Covid-context is a primary data point for their rejection of the emergency use.

The FDA’s notice of emergency use rejection for fluvoxamine was concluded with currently available and approved treatments for Covid-19. We have detailed each of these and encourage their use whenever applicable. These include Paxlovid, Remdesivir, Bebtelovimab, and convalescent plasma. We note that Molnupiravir is listed among these as well, but we discourage the use of this drug due to concerns about mutagenesis and cytotoxicity.

Many further treatments are currently in development, including a number of monoclonal antibody treatments that aim to broadly neutralize all variants of SARS-CoV-2, which is an ongoing concern two years into the pandemic.