Getting a Grip on Influenza: The Pursuit of a Universal Vaccine (Part 1) 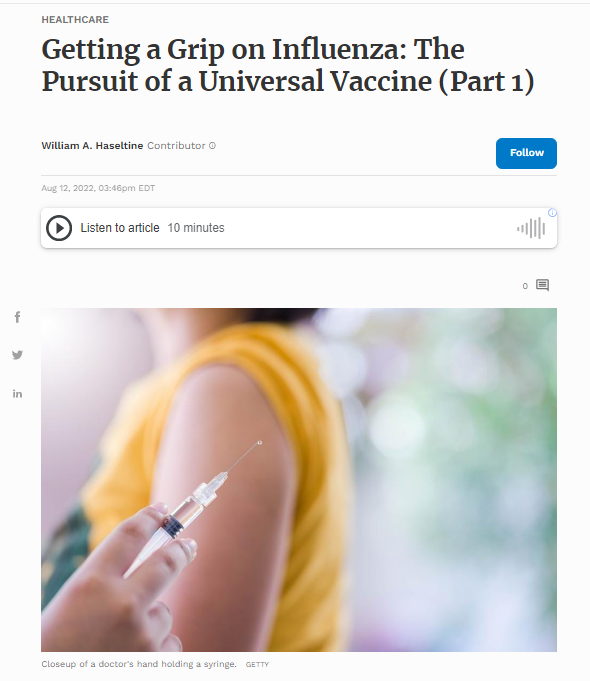 This is a short series about a recent success on the road to developing a much sought-after broadly neutralizing vaccine against all influenza A viruses. If successful, it may act as a precursor to a truly universal flu vaccine, one that protects against all types and subtypes of the virus. The breakthrough may also provide a blueprint for developing a Covid-19 vaccine that retains its efficacy in the face of new variants.

Here, I give a brief overview of the history and nature of influenza viruses, including why it has been so difficult to develop successful vaccines. In a follow-up story, I will discuss strategies that have been used to try to overcome these challenges, and crucially, their shortcomings. And in the last installment, I offer a detailed analysis of one of the latest —and most promising— advances in the field.

With Covid-19 on the scene, talk of other respiratory viruses has taken a backseat. But this doesn’t change the fact that they are as present as ever, lurking in the background. Influenza is one such virus, causing an estimated 1 billion cases globally every year — of these, upwards of 500,000 end up being fatal. Although lockdowns and social distancing efforts aimed at curbing the spread of Covid-19 also helped put a dent in seasonal influenza epidemics, the flu is now returning with full force (Figure 1).

There are seven types of influenza, four of which can infect mammals: A, B, C, and D. Influenza A and B are the most common, driving yearly seasonal flu epidemics. Influenza C infections in humans are rare and are thought to cause relatively mild disease. Influenza D mainly infects cattle with no recorded human infections to date.

On the whole, influenza A viruses are considered the biggest threat. All of the major influenza pandemics of the last century have been caused by influenza A viruses, the most notable being the Spanish flu pandemic of 1918 which led to the death of roughly 50 million people, one tenth of the entire global population at the time.

Influenza A viruses are also particularly adept at evading our immune system; they have a high rate of genetic mutation, resulting in a process known as antigenic variation. This is what allows the virus to reinfect us again every season, it is what makes the virus volatile and capable of causing the occasional pandemic, and it is what makes it so difficult for us to develop long-lasting vaccines.

To help explain antigenic variation, it’s worth quickly looking at the structure of the virus (Figure 2).

First, all influenza viruses have single stranded, negative-sense RNA. This is the genetic material used by the virus to replicate. In the case of influenza A, the genome is broken into eight separate segments. Surrounding and protecting these RNA strands is the viral envelope. The envelope contains two key surface proteins hemagglutinin (HA) and neuraminidase (NA) — the former helps the virus enter our cells, and the latter helps newly-formed viral particles leave the cell.

There are 18 different subtypes of the hemagglutinin surface protein, aptly named H1 through H18. These are split into two groups, organized according to their evolutionary history. Crucially, immunity against one group does not confer immunity against the other group. Any universal influenza A vaccine has to account for this fact. Neuraminidase, in turn, has 11 different subtypes — N1 through N11.

It is on the basis of these surface protein subtypes that influenza A viruses are classified. For example, the viral subtype that caused the 1918 Spanish flu had an H1 hemagglutinin protein and a N1 neuraminidase protein, making it an influenza A (H1N1) virus. The influenza virus that caused the 1968 pandemic, in contrast, had a different HA subtype, H3, and a different NA subtype as well, N2. As a result, it is classified as influenza A (H3N2). These are the two most common subtypes of influenza A, responsible for the majority of yearly infections.

Influenza A subtypes can be broken down even further into strains. This is determined by the sum of their genetic material, known as the genome. Two viruses may have the same broad hemagglutinin and neuraminidase subtypes, but have subtle differences throughout their genome. For example, the H1N1 subtype was responsible for both the 1918 and 2009 influenza pandemics, but in each case it was a different strain of the virus (Figure 3).

So, how does all of this relate to antigenic variation and why does it make it difficult for us to develop a universal influenza A vaccine?

The HA and NA surface proteins are recognized by our immune system as foreign substances —known as antigens. Detection of antigens in our body leads to the activation of various immune responses aimed at clearing the threat. One kind of immune response involves training B cells to produce antibodies that specifically target the antigens in question. In a sense, our B cells develop a type of “immune memory” towards the virus. Doing so allows our immune system to react more quickly and effectively in case of reinfection, blocking the virus before it has the chance to get us sick.

As hinted at above, influenza A viruses are notorious for their ability to mutate. This happens when the virus makes small “mistakes” while copying its genetic information during replication. Over time, these small mutations to the genome can accumulate, changing the structure of various parts of the virus, including HA and NA. If it changes enough, the virus will be able to evade our immune system; our B cells will no longer be able to recognize the antigens, nullifying what they may have learned during a prior infection. This is a type of antigenic variation called “drift”, and it is the reason we can repeatedly become sick with the flu.

Vaccination against influenza works by exposing our immune system to killed or weakened forms of the virus. In the same way a natural infection would, this helps our immune system build up a memory of the viral antigens and teaches it to keep an eye out for them in the future. But like the antibodies produced after natural infection, those produced in response to vaccination are also rendered useless over time by antigenic drift; as before, the antigens become too different to be recognized, forcing B cells to rebuild their immune memory all over again. This is why scientists have to develop a new flu vaccine every year, so that our immune system can build up its memory based on the most recent circulating influenza antigens.

There’s also another, more drastic kind of antigenic variation called antigenic “shift”. Whereas drift happens over an extended period of time, via the accumulation of small changes, antigenic shift can lead to substantial changes very quickly. How? Usually when a cell is infected by an influenza virus, eight gene segments come in, these eight segments are copied and packaged into a newly formed viral particle, and the new particle then leaves the cell to go infect other cells. But sometimes a single cell —whether human or avian or porcine— can become infected by two different influenza A viruses at the same time. In such cases, the two viruses can end up “exchanging” RNA segments with one another. This is called reassortment, a process that leads to the creation of a third, novel virus that’s distinct from both of the parent strains. Often this happens when an influenza A virus jumps between different animal hosts. For example, the 1957 influenza pandemic was caused by a novel subtype, H2N2, composed partly of genes from the 1918 strain and partly from new genes gained while infecting birds (Figure 3).

Such sudden jumps in genetic code can lead to influenza viruses that look very different to those usually circulating, rendering the surface proteins unrecognizable to our immune system. Once again, our immune system is confronted with what is essentially an entirely new threat and has to build its immune memory from the ground up. Whereas antigenic drift is responsible for yearly seasonal flu outbreaks, antigenic shift is often responsible for new influenza pandemics.

The challenge: any universal influenza A vaccine has to successfully account for both antigenic drift and antigenic shift. So far, this has proven very difficult.

In the next article, I go over some of the more popular vaccination strategies aimed at overcoming these obstacles.