Hopeful New Entry In The Race For A Universal Covid Vaccine 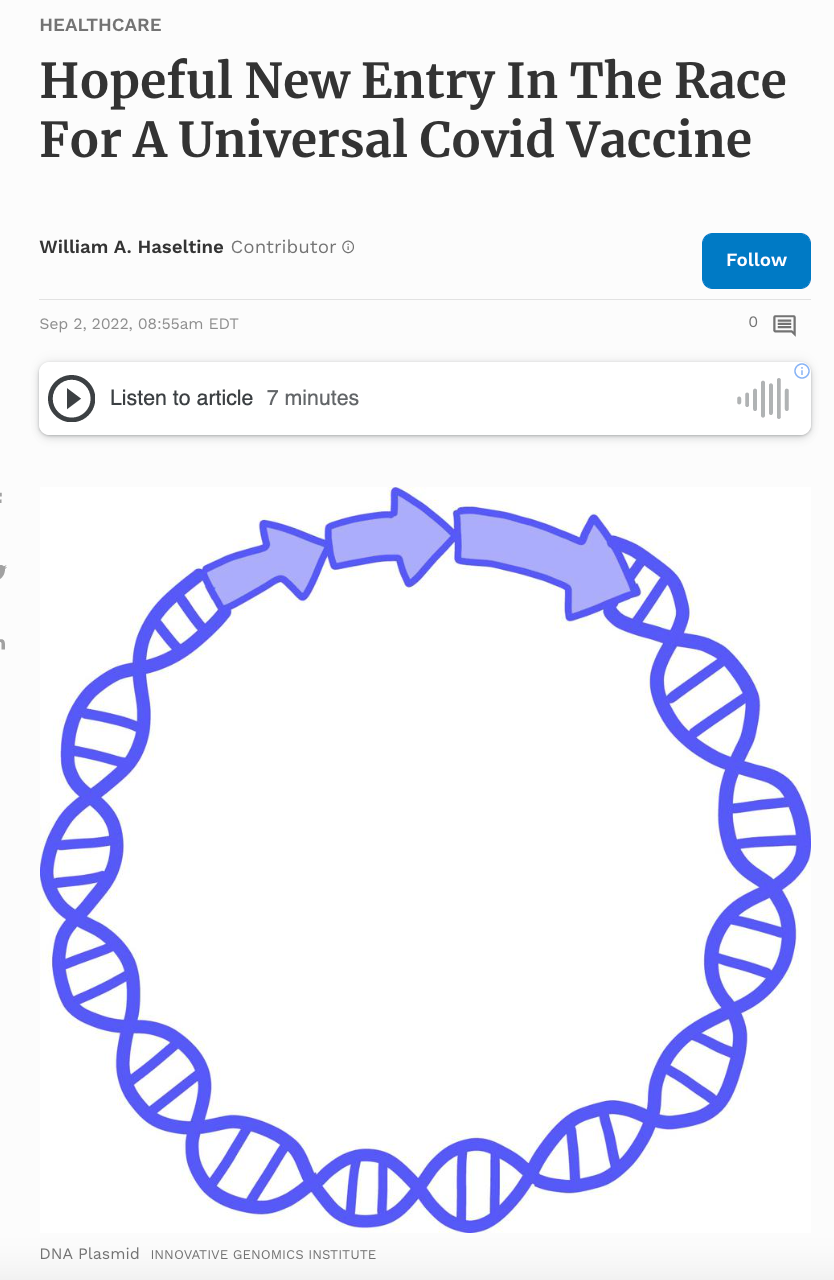 A recent paper published by a team of scientists in Sweden boasts the ambitious title: “A universal SARS-CoV DNA vaccine inducing highly cross-reactive neutralizing antibodies and T cells”. This claim of a universal SARS-CoV vaccine would be good news if the paper measured up to its title. The study offers some interesting insights and may be of use for the creation of more broadly active SARS-CoV vaccines. However, the approach of this group of scientists seems hopeful if nothing else.

To understand the issue with their approach, let’s take a step back. Current variations of the SARS-CoV vaccine rely on a singular feature of the virus: the spike protein. There are two widely accepted forms of these SARS-CoV vaccines. These are the adenovirus vector vaccine and the mRNA vaccine.

Both the adenovirus vector vaccine and the mRNA vaccine rely on introducing a slightly modified version of the spike protein to the body, causing the body to respond by creating antibodies against the spike protein.

These vaccines have proven to be highly effective at reducing serious illness and death across a wide variety of SARS-CoV variants. Unfortunately, the immunity they provide against infection and transmission is short-lived and seemingly depends on very high levels of antibodies. When the level of antibodies begins to fall or when a new spike protein variant appears and is unrecognizable to our antibodies, protection against infection quickly fades.

This means that there exists a need to create a vaccine that can protect the body from all SARS-CoV variants and that maintains high levels of antibodies. The research group from Sweden proposes to address this question in two different ways.

Second, researchers also included DNA from two additional proteins that are highly conserved across the SARS-CoV variants. These are the membrane protein (M) and the nucleocapsid protein (N) from the original Wuhan strain of the virus. They coupled the M and N DNA with the spike protein receptor binding domain DNA into a single antigen. Both the M and N proteins have some broadly cross-reactive epitopes across strains of betacoronaviruses.

Researchers believed this strategy would work because the receptor binding domain has previously been shown to naturally fold into its proper, functional configuration. Presumably, the M and N proteins would do the same.

To administer the vaccines, the researchers constructed the genetic material into a DNA plasmid with a promoter signal that would allow the DNA to be transcribed and translated into protein. They also optimized the codon usage of the receptor binding domain and the M and N proteins so that the proteins could be more easily expressed in human cells.

In their experiments, immunization took place via electroporation. Electroporation is a DNA vaccine delivery system that uses an electrical pulse to create temporary pores in cell membranes. This allows the DNA plasmid to pass through the cell membrane and into the cell. The cells could then use the DNA to form antibodies and induce an immune response.

After testing their vaccine on mice and rabbits, the researchers found that they were able to produce antibodies for the three spike protein variants and the N protein, but not the M protein. In mice, these antibodies were able to effectively neutralize the original Wuhan strain of the virus as well as the Beta variant of SARS-CoV-2. In rabbits, the antibodies effectively neutralized the Delta and Omicron variants of SARS-CoV-2.

When mice were tested with a lethal dosage of the SARS-CoV-2 Beta variant, the DNA vaccine fully protected the mice against lethal infection. After staining the mice’s organs to determine if viral infection spread throughout the body, researchers also found that the vaccine minimized viral replication in the upper airways and spleen.

While their results seem to be promising, there are still a number of questions as to whether this vaccine will translate to a universal vaccine against all SARS-CoV-2 variants. First, it is unclear whether or not the spike protein receptor binding domains along with the M and N proteins are sufficient to prevent reinfection.

The unmentioned challenge of creating a universal vaccine against SARS-CoV-2 is that reinfection occurs frequently. In other words, prior infection with all viral proteins including M and N does not provide long-lasting protection. Why do the authors assume that the antibodies that they include will perform any better than natural infection? Based on this observation, it is not evident that the addition of M and N antibodies would offer the protection that this team of researchers hopes for.

Whether or not a variety of spike protein receptor binding domains will offer broader protection against SARS-CoV-2 variants is also unclear. However, there is some hope of success for this theory, and it is currently being tested by several researchers in the field.

Another question is whether DNA-based vaccines are effective at all. Although there are a number of DNA vaccines in clinical trials, none have been approved by the United States FDA. In fact, only one has been given emergency-use authorization by India for Covid-19. It would also be interesting to know how broadly neutralizing this vaccine is against the newest variants that have been sweeping the world: BA.5 and BA.2.75

Overall, this study may contribute some insights into how we can create a universal vaccine, however, the title of the paper is highly misleading. Using a variety of spike protein receptor binding domains may offer broader protection against SARS-CoV-2 variants, but additional experiments on primates are necessary to determine whether this theory could hold in humans. While including more viral proteins in our vaccine strategy may seem like a solution, there is still much work to be done to understand how we can prevent reinfection before a universal vaccine is possible.

We will wait with interest and hope for the results of this DNA vaccine.