Imaging the Brain: What Brain Scans Reveal About the Consequences of Covid-19 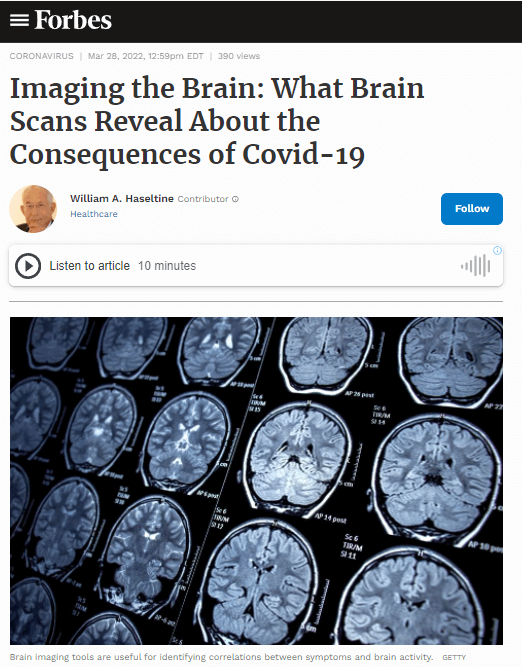 This story is part of a larger mosaic of stories on the neurological consequences of Covid-19 and  Post-Acute Sequelae of Covid-19 (PASC), also known as Long Covid. Read part one, two, and three of this series.

Approximately two-thirds of those hospitalized for Covid-19 experience at least one neurological complication. How this damage occurs without directly infecting brain cells remains one of many mysteries regarding the pathology of Covid-19. Even more puzzling is the fact that people who experience mild or asymptomatic infection may later develop new cognitive and psychiatric symptoms, regardless of age and pre existing conditions. A recent report from the Journal of Nuclear Medicine may shed light on some of the structural damage to the brain as a result of Covid-19.

One of the more striking consequences of Covid-19 are the increasing reports of Parkinson’s Disease following infection. Therefore, several studies have sought to investigate the structural changes in the brain induced by Covid-19, as well as corresponding symptoms of abnormal movement, that seem to resemble neurodegenerative disease.

Meyer et al. suggest that Covid-19 may unmask or worsen neurodegeneration, putting some at risk for Parkinson’s disease and other neurodegenerative diseases. In some cases, symptoms begin only a few weeks after being infected with SARS-CoV-2. Studies imaging the brains of those affected in fact found significant deficits in the dopaminergic nigrostriatal pathway.

As shown in the figure above, this dopamine pathway begins in the substantia nigra and extends through the caudate and putamen, as well as parts of the basal ganglia. Neurons in this pathway release dopamine neurotransmitters to coordinate voluntary movements. With Parkinson’s disease and related neurodegenerative diseases, some of these neurons begin to degenerate or die. Less neurons releasing dopamine makes initiating movement progressively becomes more difficult. It is unclear whether Parkinson’s-like symptoms develop from Covid-19 infection or whether the infection accelerates deficits that are already present.

This is not the first time that a viral infection has been linked to Parkinson’s Disease. The first recorded example dates all the way back to the 1918 influenza outbreak. People born during this epidemic were two to three times more likely to develop Parkinson’s Disease later in life, compared to those born before or after. Similar to Covid-19, having the flu does not guarantee a Parkinson’s diagnosis, but there does seem to be a connection between inflammation in the brain and neurodegeneration.

Inflammatory Damage to the Brain

How does SARS-CoV-2 gain access to the brain? One theory points to pro-inflammatory cytokines. These immune cells travel throughout the bloodstream and are able cross the blood-brain barrier. Exposure to SARS-CoV-2 can produce a robust immune response that overwhelms the brain with pro-inflammatory cytokines, even if nerve cells are not directly infected. While cytokines are helpful for fighting infection, high concentrations can severely damage healthy cells. It is possible the stress from pro-inflammatory cytokines not only induces short-term damage to brain tissues, but also may promote the progression of underlying neurodegenerative conditions, including dementia and Parkinson’s.

Activation of the microvascular system by the SARS-CoV-2 spike protein alone has also been shown to inflame endothelial cells that line blood vessels. This can have significant consequences throughout the cardiovascular system, including the blood-brain barrier. A dense vascular system travels in between cells throughout the brain to provide nutrients and remove toxins, as shown in the figure below. Inflammation in those epithelial cells, therefore, can impact adjacent neurons and supportive glial cells.

Autoimmune Damage to the Brain

Another theory suggests that neurodegenerative deficits may be linked to an alternative immune condition: autoimmune encephalitis. Albeit rare, severe cases of Covid-19 can lead to autoimmune encephalitis during which the body’s own immune cells attack healthy cells. PET imaging studies indicate that the consequences of autoimmune activity can vary throughout the brain. One case study, for instance, found reduced activity in the outer cortical layer of the brain, but surprisingly also found increased metabolic activity in the basal ganglia and cerebellum that may be related to the production of specific anti-neuronal antibodies. Therefore, brain damage could be a consequence of self-attacking antibodies weakening structures in the nigrostriatal dopaminergic pathway, as well as the regions of the cerebellum involved in movement.

However, cases of autoimmune encephalitis seem to be separate from those that develop neurodegenerative conditions following Covid-19 infection. In fact, treatment with immunoregulatory drugs has been shown to improve symptoms for those with autoimmune encephalitis but not those who developed neurodegenerative conditions. This finding is consistent with the idea that SARS-CoV-2 accelerates existing degeneration rather than promotes the development of new deficits.

Bystander Damage to the Brain

Thirdly, brain tissues may experience bystander damage as a result of infection in a region very close to the brain– the nose. Meyer et al. therefore considered whether olfactory deficits associated with Covid-19 may contribute to structural changes in the brain. Several studies found decreased metabolic activity  in regions mostly associated with olfaction and increased activity in the orbitofrontal and parietal cortex important for processing sensory information. Since these findings were not consistent across all individuals reporting lost or disordered sense of smell, hypometabolism in some regions and hypermetabolism in others may instead be a consequence of neurons reorganizing once a sensory input is lost, i.e. olfaction.

Hypoxia, which develops when an infection overwhelms the lungs and less oxygen is available to cells, may also generate a broad spectrum of damage to the brain. When the brain goes without sufficient oxygen for an extended period of time, cognitive processes are disrupted and brain cells begin to die. Early autopsies of people that died from Covid-19 suggested that hypoxia may underlie several neurological compilations. This could explain the high prevalence of neurological complications among those hospitalized for the virus. Recent brain imaging, however, reveals that a more diverse set of mechanisms may be contributing to symptoms during infection and long after.

During the acute phase of Covid-19, the most commonly reported neurological symptoms are loss of smell (60- 80%), myalgia of muscle pain (40%), encephalopathy (15-30%), and cerebrovascular events (1-5%),  as well as peripheral nerve damage and encephalitis on occasion. Since these complications can significantly alter the structure of the brain, molecular brain imaging tools, such as positron emission tomography (PET) and single photon emission computed tomography (SPECT), are useful diagnostic tools.

Encephalopathy, for example, is characterized by cognitive impairments, but these symptoms are also accompanied by significant hypometabolism in top layers of the frontal and parietal lobes, important for integrating sensory information into executive processing functions. Clinical studies show that hypometabolism in these areas negatively correlates with lower scores on cognitive tests. Also, when metabolic levels begin to stabilize following infection, most individuals previously hospitalized for Covid-19 show almost complete cognitive improvement. Researchers speculate that encephalopathy may partially manifest as microgliosis in white brain matter, during which the microglia cells that normally support brain tissue temporarily cluster to produce an immune response. The corresponding immune response activates several other pro-inflammatory cells, including cytokines, that injure healthy cells. Once the infection is eliminated, however, the microglia separate to restore normal brain function.

In contrast, diagnosing long Covid can be more challenging. Long-lasting symptoms are often neuropsychiatric, such as fatigue, attention problems and memory loss and therefore cannot be seen using molecular imaging tools. This does not mean that people with these symptoms may not face significant challenges.

Some studies suggest that adults and children with long Covid exhibit widespread hypometabolism, including in the orbitofrontal cortex, medial temporal lobes, thalamus, brainstem and cerebellum. Clinical investigations, however,  have not found any correlations between cognitive or neuropsychiatric symptoms and PET imaging measurements. This makes it more difficult to determine the underlying mechanisms that contribute to long-lasting symptoms.

Brain imaging tools are useful for identifying correlations between symptoms and brain activity, but they often do not prove causation. We are only just beginning to understand how SARS-CoV-2 damages brain tissues during acute infection and long after.  Although the full consequences may not be known for years to come, Meyer et al. seems confident that for a majority of people these neurological impairments will not be permanent or unresponsive to treatment. As Philipp T. Meyer, MD, PhD, head of the Department of Nuclear Medicine of the Medical Center–University of Freiburg in Germany, puts it,  “To the best of our knowledge there are no convincing studies clearly demonstrating relevant and irreversible brain damage, except for disease complications like brain infarcts and bleedings.” Continuing clinical research on the consequences of Covid-19 in the brain will expedite the production of new treatments and vaccines bringing relief to millions.