In the Eye of the Storm: How Covid-19 Impacts the Eye 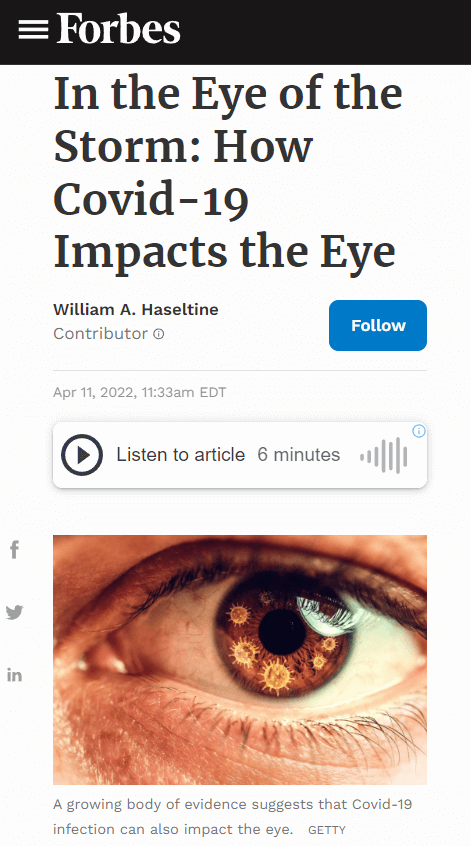 While Covid-19 is commonly associated with infection of the lungs, heart and other vital organs, a growing body of evidence suggests that infection can also impact the eye. Approximately 1 in 10 people exposed to Covid-19 experience at least one eye problem, such as dryness, redness, blurred vision and sensitivity to light. Conjunctivitis, or “pink eye,” may also appear in the early stages of infection, suggesting that it may be one the first markers of Covid-19 infection. Given the direct connection between the eye and brain via the optic nerve, infection of the retina could open a window to the rest of the brain. Thanks to a study published by researchers at the Max Planck Institute for Molecular Biomedicine in Germany we may now have a better picture of how SARS-CoV-2 infects cells in the eye and the possible consequences to the rest of the nervous system.

To track changes in the eye after exposure to Covid-19, Menuchin-Lasowski et al. used retinal organoids, small three-dimensional tissues cultures resembling human retinas. These stem-cell derived tissues contain most types of cells found in the retina, including photoreceptors and supporting amacrine and horizontal cells, correctly organized in a layered structure as shown in the figure below.

As these cells grew and reached maturity, investigators exposed the retinal organoids to the SARS-CoV-2 virus. To their surprise, Menuchin-Lasowski et al. found that SARS-CoV-2 not only infected cells but also replicated. This was evident by the production of viral plaques in the cells that were exposed to the virus. The amount of viral plaque significantly increased within the first 24 hours and nearly doubled after another 24 hours. Interestingly, after 72 hours, the amount of plaque decreased back to the levels detected during the first 24 hour time point. Previous studies have observed a similar pattern of Covid-19 infection in human brain organoids.

How are cells infected in the first place? Although viral transmission through the eye has not been well described, SARS-CoV-2 can penetrate mucous membranes that line several organs including the respiratory system, as well as the eye’s surface and eyelids. When a droplet containing the virus lands on the surface of the eye, SARS-CoV-2 likely travels through the mucous membrane into the internal cavity of the eye before eventually reaching the retina found all the way in the back of the eye.

Relatively low expression of the ACE-2 receptor used by SARS-CoV-2 to gain entry to cells has been detected in the eye. Strikingly, Menuchin-Lasowski et al. found that blocking this receptor could prevent infection in the retinal organoids, suggesting that ACE-2 may be the primary mechanism for infection in the eye despite low levels of expression.

Approximately 40% of cells that were infected by SARS-CoV-2 in this investigation were retinal ganglion cells, compared to a small percentage of photoreceptors and even fewer bipolar and amacrine cells. Despite being located in the inner layers of the retina, ganglion cells seem particularly susceptible to infection.

Reports of pink eye and other eye problems with Covid-19 signal that inflammatory damage is occurring in the eye. It is possible that retinal injury is a consequence of vascular dysfunction around the eye related to the infection of epithelial cells lining blood vessels. Menuchin-Lasowski et al. also speculates that infected retinal ganglion cells may activate inflammatory signal pathways that damage nearby cells. In fact, common retinal injuries generated by Covid-19, such optic nerve swelling and lesions in the ganglion cell layer, seem to be linked to retinal ganglion cells damage.

Menuchin-Lasowski et al., for example, reported that infection of the retinal organoids increased expression of several inflammatory genes, consistent with previous findings that SARS-CoV-2 induces a robust immune response. Cytokine IL-33, in particular, was significantly upregulated. The prevalence of IL-33 in the blood of individuals exposed to Covid-19 has been shown to correlate with disease severity. Enhanced IL-33 was also accompanied with increased expression of NLRP1, an inflammatory protein implicated in degenerative eye diseases that cause irreversible blindness.  Interestingly, genes associated with DNA repair, recombination and metabolism were significantly downregulated, which could explain why symptoms related to Covid-19 infection continue to linger long after the initial infection. These findings only add to the increasing body of evidence that SARS-CoV-2 is largely an inflammatory disease.

Previously the impact of Covid-19 on the eye had not been well understood.  “However, our current retina-organoid study shows that infection with Sars-CoV-2 can have direct pathological consequences for retinal ganglion cells, even though visual impairment is not common in patients with Covid-19,” said Dr. Thomas Rauen, co-leading author of this study and head of the White Paper Project Group “Brain Organoids: Alternatives to Animal Testing.” These findings may help us to better understand the pathology of Covid-19 not only the eye but also the rest of the nervous system.