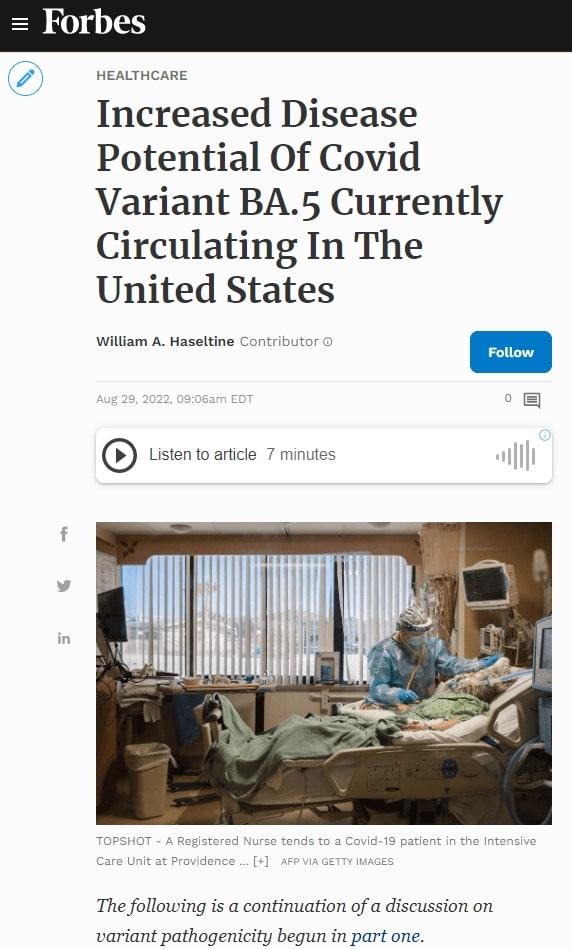 The following is a continuation of a discussion on variant pathogenicity begun in part one.

Throughout the Covid-19 pandemic, many iterations of the SARS-CoV-2 virus have dominated over others. The B.1 variant of 2020 was overtaken by the Alpha variant in early 2021. Alpha was overcome by Delta later that Summer. Next, Delta was pushed aside for Omicron BA.1 in late 2021, followed by BA.2 shortly thereafter. Now, BA.5 dominates the global virus landscape.

There are two driving forces behind the success of a SARS-CoV-2 variant over another. The first is a variant’s ability to infect those previously infected or vaccinated and the second are the virus’s intrinsic pathogenic properties. Here we focus on the latter, specifically in reference to the latest Omicron variants.

A recent study by Tamura et al. focuses on the latter, specifically on how Omicron subvariants, including BA.5, compare pathogenetically to earlier virus variants. Understanding the pathogenic dynamics of emerging variants may inform drug and vaccine development, treatment regimens for those with moderate to severe disease, and surveillance for variants yet to come.

As there have been nearly 600 million confirmed cases of Covid-19 (meaning the accurate count is almost certainly in the billions), hundreds, if not thousands, of SARS-CoV-2 variants are circulating at any given time. However, the pandemic’s number of variants of concern or interest lies under 20. These viruses have some discernable features that make them more prevalent than others.

Tamura et al. focus this line of reasoning on BA.5: the most widespread SARS-CoV-2 variant at the time of writing. They analyzed BA.5 alongside BA.2, BA.1, and B.1.1 as a control.

Pathogenicity is a combination of traits that result in a wide variety of virological outcomes. One of the most critical outcomes is infection impact on the lung. Tamura and colleagues evaluated the effect of different variants on respiratory epithelial and endothelial barriers. Using in vitro airway simulations, they found that B.1.1 and BA.5 exhibited significantly higher disruption than BA.1 or BA.2. They note that a significant amount of virus gathers in the blood vessel channels of respiratory cells in BA.5 and B.1.1, more so than BA.1 and BA.2. This indicates that the later Omicron variant, BA.5, has a more significant respiratory impact than BA.1 or BA.2.

Tamura and colleagues then monitored each virus’s pulmonary in vivo dynamics in infected hamster models with the same virus variants. Notably, they found that subcutaneous oxygen saturation in BA.5 was lower than BA.1 and BA.2, but not quite to the level of B.1.1. Again, this indicates the more severe pathogenicity of BA.5 as compared to earlier Omicron variants.

The researchers examined lung tissue inflammation over time based on their previous observations. As expected, B.1.1 displayed the most significant lung inflammation, followed by BA.5, BA.2, and BA.1. Lung inflammation leads to many of Covid’s most notable symptoms, including fatigue, difficulty breathing, dry cough, chest tightness, and chest pain.

Two indicators for the severity of disease outcomes are syncytia formation and cleavage efficiency. They observed the reduced size of syncytia formation in the Omicron sublineages compared to the B.1.1 control. Syncytia are cellular structures formed by the fusion of uninuclear cells. Upon further examination, BA.2 and BA.5 were far more syncytia efficient than BA.1.

Cleavage efficiency in B.1.1 was highest among the four subjects, but BA.2 and BA.5 outranked BA.1. What does all this mean?

A unique trait of the Omicron family is the lack of efficient cleavage present in earlier variants. Cleavage allows for more efficient fusogenicity in host cells, leading to more severe disease. This is why Omicron was considered slightly less intense in terms of illness than Delta and other variants.

However, the increased syncytia efficiency of BA.2 and BA.5 over BA.1 indicates that fusogenicity is increasing in later Omicron strains as opposed to BA.1. This means that despite the lacking cleavage in the variants, they are evolving to be more severe in terms of disease, meaning more intense complications for patients.

Using the data from this study, we can infer that despite its parental lineage’s reduced pathogenicity, BA.5 evolved to become more pathogenic. That suggests that the cases of BA.5 circulating today exhibit more severe symptoms on average than cases from the BA.1/BA.2 wave in early 2022.

While further study would be required, we hypothesize that emerging strains of SARS-CoV-2 such as BA.2.75 and BA.4.6 would follow a similar trendline of increased pathogenicity as the virus continues to mutate and evolve.

While earlier Omicron-induced Covid-19 symptoms may have been quelled by the standard remedies of rest, Tylenol, Advil, and so on, BA.5 cases are much more likely to require more advanced interventions like monoclonal antibody treatments and antiviral drugs. As such, the production and price of such products must be improved to satisfy the increased need in the coming weeks and months.