Inhaled Remdesivir for Home Use for Covid Treatment 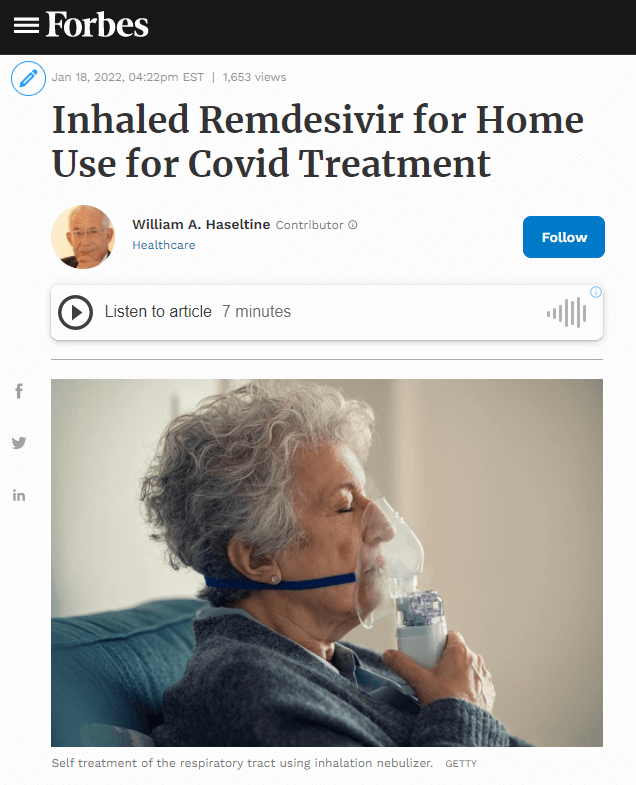 For a patient at high risk of severe Covid-19 related complications, newly released data shows that inhaled remdesivir offers the promise of an effective treatment for home use. Remdesivir is currently the only FDA-approved treatment of Covid-19. Recent data shows that if used early after infection, a three-day course of intravenously administered remdesivir significantly reduces the risk of hospitalization. However, because this antiviral drug has only been approved for intravenous use, there are considerable challenges to treating patients outside hospital settings. Now comes a new study that offers the prospect of home treatment via inhaled remdesivir.

Under the current guidelines for remdesivir use, an individual first must know they are positive for Covid-19, which requires timely access to rapid testing. The infected individual then needs to consult their primary care doctor or other health professional to determine their eligibility for remdesivir within the early stages of infection. With a referral for treatment, the patient must then travel to a hospital or health center with a readily available supply of remdesivir and equipment needed for an IV infusion. The most effective treatment plan would require the patient to return for two additional days, putting strain on the infected individual as well as the healthcare worker providing treatment.

In reality, information regarding where non-hospitalized Covid-19 patients can go to be treated with remdesivir and the capacity for these locations to take walk-in patients remains largely unclear. The FDA made remdesivir widely available with full authorization of use, but limited appointment slots for IV infusion and shortages in clinical staff, particularly specialized infusion nurses, present major challenges to treatment. Considering that IV infusion centers often cater to immunocompromised patients being treated for other disorders or diseases, there is also a significant risk to exposing these patients to the Covid-19 virus. With little federal guidance on who would pay for treatment with remdesivir in an outpatient setting, additional equity issues restrict universal access to treatment. Lastly, persistent challenges to accessing rapid testing delays the start of treatment, thus reducing the drug’s capacity to prevent hospitalization.

To overcome these challenges, an inhaled version of remdesivir has been proposed as an alternative method for administering treatment. This innovation would allow patients to be treated outside a hospital or clinical setting, effectively reducing the risk for spreading infection. With a nebulizer machine, commonly found in drug stores, infected individuals could administer their own treatment, or if further assistance is needed, other members of the household could help load the drug into the machine. Several medications, particularly those for young children, already capitalize on the non-invasive mechanics of nebulizer treatment. Once a fluid drug is loaded into the machine, a patient simply wears the attached mask or mouthpiece and slowly inhales a vaporized form of the drug.

While intravenous treatment circulates the bloodstream before reaching respiratory pathways, inhalation allows for direct exposure to nasal and respiratory tissues. According to a manufacturer-sponsored study published by Science, African green monkeys recruited for the study demonstrated that a 20-fold lower dose of remdesivir can be used for inhaled treatment compared to IV infusion. Gilead researchers reported comparable outcomes for the primate subjects treated with inhaled remdesivir to those given traditional IV infusions. Repeated doses of inhaled treatment were shown to be safe and effective among the primate subjects. Under the assumption that the lung function between monkeys and humans is similar, Vermillion et al. suggest that 0.35 mg/kg inhaled dose in the monkey subjects is equivalent to a standard 200 mg IV infusion of remdesivir in humans.

Direct administration to respiratory pathways demonstrated high antiviral activity within respiratory tissues, while largely sparing non-respiratory organs, including the liver and kidneys. Because previous studies have reported increased inflammation of the liver as a major side effect of remdesivir, inhalation reduces the risk of liver damage, especially among patients with liver disease or other metabolic disorders. Additional research is needed to directly explore these benefits in human patients.

Inhaled administration was also highly effective in reducing viral load in both the lower and upper portions of the respiratory tract, while IV treatment has a greater effect on lower tissues. This method would be particularly potent against emerging variants like Omicron, which rapidly multiplies in the nose and upper respiratory tract. Remdesivir has already been shown to be effective against previous circulating strains, including Alpha, Beta, Gamma, Epsilon and Delta.

It should be noted, however, that the results from these primate animal models may not be easily translatable to human subjects. The nature of this experiment allowed treatment to begin within a few hours after infection, which would be difficult to replicate in human clinical studies or real-world settings. Further refinement of the inhaled remdesivir formula is necessary to ensure effective and safe antiviral treatment in humans.

Although this alternative method for treatment allows for the treatment of Covid-19 patients at home, concerns regarding availability and access to the drug itself continue to persist. First and foremost, supply of remdesivir needs to be extended beyond hospitals and IV treatment centers. Individuals should have the option to pick up the medication from their local drive-thru pharmacy, or ideally have the medication delivered directly to their home. Since early treatment has been shown to be the most beneficial, individuals at high risk of hospitalization may be recommended to stock emergency doses in their medicine cabinets. This would require additional regulatory procedures to identify the most vulnerable patients and promptly deliver sufficient doses of remdesivir. Another option may be to set up distribution centers in local communities, but this does not guarantee access to those that need the drug the most. To alleviate financial obstacles, additional policies should consider subsidizing costs for both the drug and nebulizer machinery.

At this stage of the pandemic, an inhaled version of remdesivir best serves as part of a larger strategy that expands access to rapid testing, defines stricter isolation procedures, and facilitates greater communication to patients who have tested positive. As more antiviral drugs against Covid19 are produced and distributed, it is critically important for researchers to work alongside policy makers and clinical providers to ensure universal access to those among us that are the most vulnerable.