Innate And Adaptive Immunity In The Human Intestine 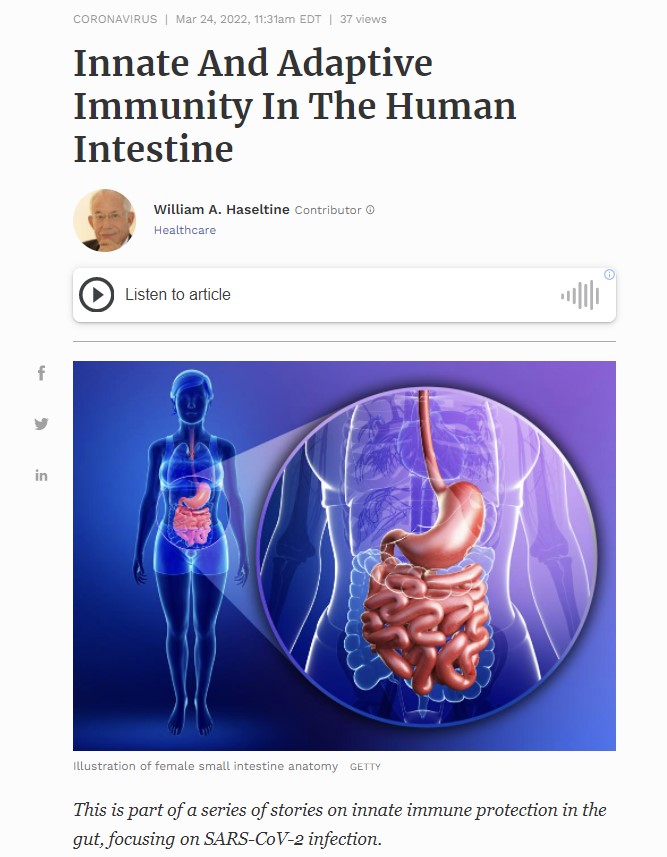 This is part of a series of stories on innate immune protection in the gut, focusing on SARS-CoV-2 infection.

For the most part, discussions surrounding Covid-19 have focused on its impact on the respiratory system, with special emphasis placed on the lungs. This is understandable considering the primary symptoms of infection are respiratory. Now that we’re more than two years into the pandemic, we’re quickly realizing that Covid-19 also affects a variety of other major organs across the body, including the heart, the blood vessels, the brain, the pancreas, and even the male reproductive tract.

This poses somewhat of a mystery. Our intestines expose more than 350 square feet of mucosal membrane, the equivalent of around half a badminton court. This mucosal membrane is covered in cells rich in angiotensin-converting enzyme-2 (ACE2) receptors— the main receptor by which SARS-CoV-2 enters into our cells. So how come, despite such a large number of functional ACE2 receptors, Covid-19 isn’t more of an intestinal disease?

There are three general explanations. First, the mucosal lining of the intestine is covered with a protective coat of mucous, limiting direct access to the cells’ surface. Second, the intestines are a major source of adaptive immunity, housing approximately one third of all of our immune tissues. Finally, as we will discuss in this series, the intestines contain special immune defenses against viruses and other invading pathogens.Only recently have researchers come to realize that one of the major defenses against infection, especially in the gut, but also elsewhere, is mediated by a family of innate immune cells known as innate lymphoid cells (ILCs). Here we focus on one particular subset of this family, group 3 innate lymphoid cells (ILC3s), which have some remarkable and unexpected properties.
Innate Immunity, Adaptive Immunity, and … Trained Immunity?

All living systems are under constant assault from microorganisms— be they viruses, bacteria, fungi, or parasites. To survive, and thrive, every living being must have an effective way to counter these threats. This is where the immune system comes into play.

Humans have two main immune strategies: innate and adaptive. Our innate immune system has developed over thousands of years and is present in all vertebrates, from reptiles to fish to mammals. It is something we are born with and it can protect us from the very get-go. The innate immune response is broad and, as it’s sometimes also called, nonspecific. But in this breadth lies its strength; it doesn’t need to learn, through first-hand experience, what’s dangerous and what isn’t, it already has a general sense from the outset. At its core, the innate immune system does a really good job of separating self from other.

This is because most of our innate immune cells —macrophages, neutrophils, dendritic cells, and so on— are equipped with a kind of sensor, called pattern recognition receptors (PPR), that help detect molecules often associated with pathogens. These molecules are called pathogen-associated molecular patterns (PAMPs). These small molecular “motifs” are recognized as a threat by our innate immune system because they are highly conserved across many pathogenic microbes. Think of PAMPs as representing those features that, at the most basic level, are shared across most pathogens of a given class— bacterial, fungal, or viral. Even if there is no one essential feature that tethers them all together, there may be a series of overlapping similarities, a “family resemblance” of sorts. Because of how little these foundational features change over time, our innate immune system has had the time to build up a rolodex which it can refer to when faced with a pathogenic threat.

The biggest difference between the innate and adaptive immune responses is that the innate immune system sees and reacts almost instantly, kicking in within minutes of exposure to pathogens and triggering a very broad defense. The adaptive immune system can also recognize invading pathogens quickly, but T and B cells can take anywhere from 10 to 15 days to expand and mature fully. This process of maturation builds up their specificity and brings them to full effectiveness— adding that particular pathogen to its rolodex of bad actors. Once the adaptive immune system has been exposed to a pathogen and built up its memory, it is ready to spring into action with a tailor-made immune response almost immediately the next time around.

Until this process is complete, the innate immune system is doing the bulk of the work to protect us. In most cases, it alone is capable of clearing the infection before the adaptive immune response is ready to help out. With Covid-19, for example, many of those who are infected have few or mild symptoms, and the virus is cleared thanks almost entirely to innate immunity. It is when innate immunity does not clear the initial infection, and the adaptive immune response hasn’t had time to mature, that serious consequences ensue.

There is another kind of immunity that straddles the line between the innate and adaptive immune responses: trained immunity. Trained immunity is the modification of innate immune cells in response to exposure to a pathogen. Once modified, the cells are better able to deal with the pathogen the second time around. Basically, it’s innate immune cells building up immunological “memory”, something previously thought to happen only as part of the adaptive immune response. As we will discuss, new evidence suggests that innate lymphoid cells fall into this category; capable of both responding to threats immediately and also remembering what they have seen.