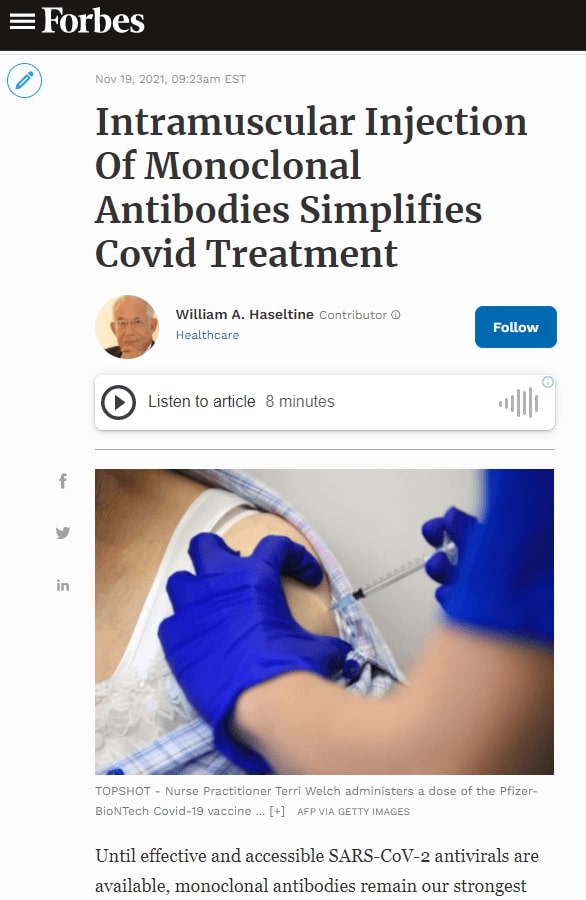 Until effective and accessible SARS-CoV-2 antivirals are available, monoclonal antibodies remain our strongest treatment and prophylactic against Covid-19. These antibodies are typically administered by a drip, which often requires medical assistance. One antibody, however, sotrovimab, could be administered intramuscularly (by shot), making delivery of the treatment far simpler. Here we review a press release by sotrovimab producers GSK and VIR that details the intramuscular administration of sotrovimab.

The trial to test sotrovimab was a phase 3, randomized, double-blind, placebo-controlled study, which is the standard for an efficacy test of this nature. The aim of the trial was to determine whether intramuscular administration of the antibody was similarly effective to intravenous (IV) administration for the early treatment of mild-to-moderate Covid-19 in high-risk populations.

A detailed review of the study is yet to be released, but according to the GSK press release, the results for intravenous and intramuscular administration of sotrovimab were roughly equal. There was a 2.7% rate of progression to hospitalization for more than 24 hours or death among high-risk patients with mild-to-moderate Covid-19 in the intramuscular group. In contrast, that rate in the intravenous cohort was 1.3%.

The adjusted difference between the two administration methods was 1.07% with a 95% confidence interval of -1.25% to 3.39%, which falls below the upper bound set by the Food and Drug Administration for non-inferiority. In other words, the receiving sotromivab from a shot in the arm is of the same clinical effectiveness as from an IV drip.

We have previously described the origins and activities of sotrovimab in greater detail. To recount, the antibody is a derivative of another antibody, S309, which was first isolated from memory B cells from the sera of a recovered SARS-CoV-1 patient. S309, like many other antibodies, targets the Spike protein of the viral genome, which modulates viral entry into host cells and carries several antibody binding sites.

S309 targets a specific residue on the Spike protein, N343, which was later determined to be a consistently conserved glycan in the Sarbecovirus subgenus. As SARS-CoV-2 belongs to this subgenus and maintains many similarities to SARS-CoV-1, S309 was a promising neutralizing antibody candidate for inhibition of SARS-CoV-2.

Sotrovimab differs from S309 in a particular way. It is purposefully engineered to possess two mutations in the Fc region. These are M428L and N434S, colloquially referred to as the LS mutation. These two mutations confer enhanced antibody binding to the Fc receptor, a critical binding agent for monoclonal neutralization. Studies describe that the two mutations result in an extended half-life of roughly 50 days and enhanced drug distribution to the respiratory system, protecting from significant lung damage or other Covid-related respiratory complications.

While the finding that intramuscular and intravenous administration of sotrovimab is significant, there are several further endpoints that should be considered with this monoclonal antibody and with all antibody candidates.

The trial described follows patients through 29 days of trial. As the half-life of sotrovimab is detailed by some studies as roughly 50 days, it would be noteworthy to follow these patients past the 29-day marker to investigate the ongoing protection from SARS-CoV-2 reinfection that sotrovimab may grant.

It is worth commenting on the relative merits and disadvantages of a single intramuscular injection of long-acting monoclonal antibodies versus orally-administered pills both for the treatment and prevention of COVID-19.

The advantage of pill formulation is that they do not require medical personnel for administration. However, the patient must determine that they are infected, see a doctor, obtain a prescription, and take the pills as recommended, at present a five-day course involving a dose every 12 hours. Moreover, the treatment must begin shortly after infection and usually within three to four days of symptom onset, which translates to between six and 12 days post-infection. Additionally, once oral treatment ceases, the patient is only protected by existing convalescent antibodies.

A single muscular injection, however, requires no further treatment or medication past the moment of treatment, though this requires medical personnel for administration. Moreover, the half-life of sotrovimab is roughly 50 days, which means the protection from subsequent infections following exposure could last three months or longer. In the case of one antibody cocktail developed by Regeneron, protection is estimated to last eight months, though that treatment is an IV drip.

Perhaps the best use for antiviral drugs occurs prior to infection, either as pre-exposure or post-exposure prophylaxis. In other words, the drug is administered as a preventative either in general or immediately following exposure to a known positive infection. In this context, a single intramuscular injection of an antibody is far superior to orally-administered pills. The single intramuscular injection may provide protection for up to four months, whereas ingestible pills only protect as long as they are taken. Additionally, long-term use of antiviral pills could lead to dangerous side effects, including carcinogenesis. This is the case for aspiring drug candidate Molnupiravir, which is toxic and mutagenic in extended use.

One major advantage of small-molecule ingestible antivirals over intramuscular injections is the price. Prices may vary and both Merck and Pfizer have stated that costs will be lower in low-income countries. For Molnupiravir, the cost of production for a full course is roughly $5. Most small-molecule drugs will be of similar production cost: around $20 or less. In higher-income countries, the five-day regimen of antiviral pills is closer to $500. A full 8-milliliter dose of sotrovimab will cost roughly $2000, which is far from a competitive price point compared to other existing and emerging treatments for Covid-19. Were the sotrovimab treatment closer to the $500 to $1000 range, it may be more competitive in the treatment and prophylaxis market.

For congregate living centers, particularly eldercare facilities where the residents are at high risk due to age and comorbidities, we first recommend triple vaccination. Then, if a Covid-19 case is detected, we would recommend all residents and employees receive an intramuscular injection of monoclonal antibodies. We call this the “belt and suspenders” strategy, conferring two layers of significant protection to high-risk populations. This strategy is universally beneficial, as it boosts all recipients’ antibody levels tremendously. Were “belt and suspenders” a routine procedure in every potential host, we would all be better protected if exposed to the virus.

Orally-administered pills, on the other hand, only provide additional protection so long as the treatment is ingested. We also note that antiviral pills are mostly used in the context of post-exposure and post-symptom-onset patients. Their benefits for pre-exposure prophylaxis have yet to be significantly evaluated.

It is welcome news that a variety of approaches for both treatment and prevention of SARS-CoV-2 infectious disease are either here or will soon be available. It will be up to both governments and individuals to decide which treatment is appropriate in what setting to join vaccines in medical control of the COVID-19 pandemic.